A day spent in the port of Kusadasi,Turkey while on a family cruise in the Eastern Mediterranean aboard the Celebrity Equinox including a tour of Ephesus.

Our day in Kusadasi, Turkey was the one day on our Mediterranean cruise where things really went awry and, in retrospect, I should have done a few things differently. Everything seemed to conspire against us that day and it was a bit of a disaster through no fault of our wonderful tour guide, Iksender from Ekol Travel.

We knew ahead of time that the day was going to be difficult as the ship was not arriving in Kusadasi until 10:30 in the morning.  This meant that it was going to be getting quite hot by the time we disembarked.  For this reason I had decided to book only a 4 hour tour that would have us stop briefly at the Temple of Artemis before continuing to the archaeological site of Ephesus which is located about 30 km from the port of Kusadasi.  We decided to forego some of the other popular historic sites in the region included the House of the Virgin Mary and St. John’s Basilica.

Katie started to develop symptoms of a head cold the night before and woke up in the morning feeling miserable.  She wanted to stay on the ship, however, I encouraged her (she may say forced her) to come with us as it was only a short tour.  We promised her that we would drop her off at the ship immediately after the tour and then the rest of us would explore Kusadasi.  I didn’t want her to regret having missed seeing Ephesus which is considered to be the best preserved Roman city in Europe. 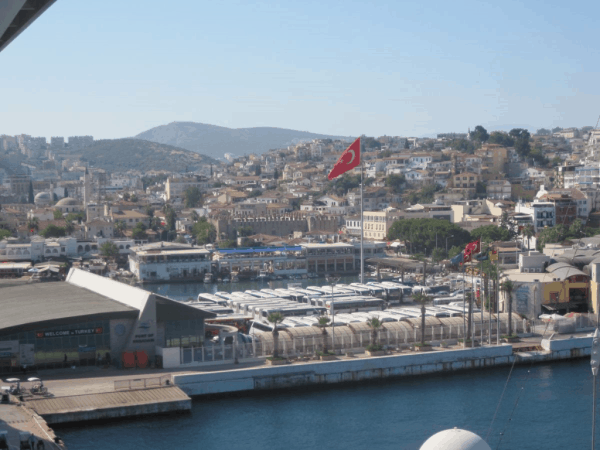 We arrived mid-morning in Kusadasi which is a resort town with a stunning location on the Aegean Sea.  Our guide, Iksender, and his driver met us at the port and we headed out of town toward the ancient site of Ephesus.  Our first stop was the Temple of Artemis which was a Greek temple dedicated to the goddess Artemis and was one of the 7 Wonders of the Ancient World.  Today all that remains of the temple that used to be four times larger than the Parthenon in Athens is a single column and a few fragments of stone that were recovered on the site.  Nonetheless, Emma was pleased to see the site that was dedicated to her second favourite goddess. 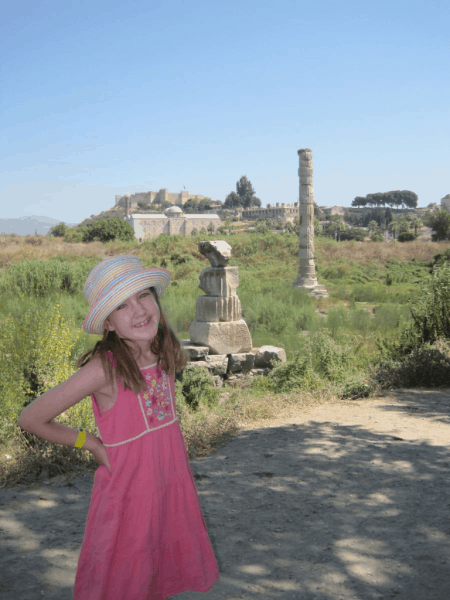 Emma at the Temple of Artemis

After a few minutes taking photos of the remains of the temple, we piled back into our van and headed to the archaeological site of the ancient city of Ephesus.  Ephesus was a major city of the ancient world.  During the Roman era the city had a population of around 250 000 which made it one of the largest and most significant cities of the Roman Empire.  Ephesus has the largest collection of Roman ruins in the Eastern Mediterranean and only a small percentage of the site has yet been excavated.

When we arrived at the Ephesus site it was already unbearably hot and Emma was starting to feel grumpy and uncooperative.  Our first sight of Ephesus was not what she had expected and she dissolved into tears.  We had been told that Cleopatra had walked the streets of Ephesus and Emma had imagined something much grander than she was seeing.  Iksender, to his credit, was extremely patient with her outburst and took the time to explain to her in simple terms what we were looking at and what she could expect to see.  He even took her to see the ruins of a building which had connections to Marc Antony and Cleopatra.  Emma was quite pleased to see the spot, in her words, “where Cleopatra used to hang out with Marc Antony”. 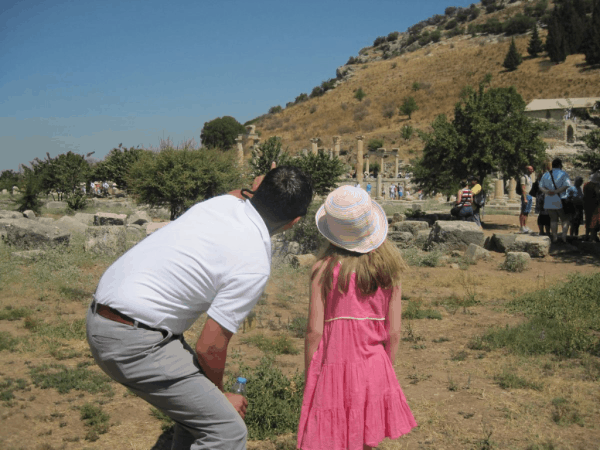 Our guide explaining Ephesus to Emma 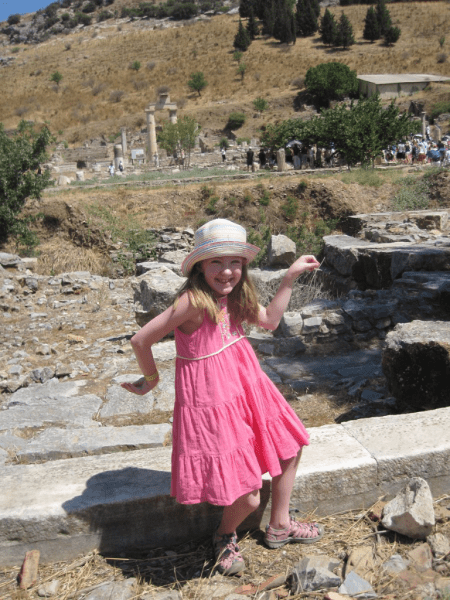 Unfortunately, moods deteriorated as we walked through the streets of Ephesus.  Katie wasn’t feeling well, Emma was grumpy and it was simply too hot for anyone to feel comfortable.  Occasionally we found something of interest, such as a carving of the goddess Nike which the athletic company used to create it’s famous swoop, but mostly there was just a lot of complaining about being hot and tired.  I was embarrassed about the behaviour but Iksender was very understanding and compassionate about how the girls were behaving in the heat.  It was probably the hottest day that we have ever experienced and, quite frankly, I would have preferred to have just been sitting in the shade as well.  This was our only chance to see Ephesus though so we soldiered on.  Big mistake. 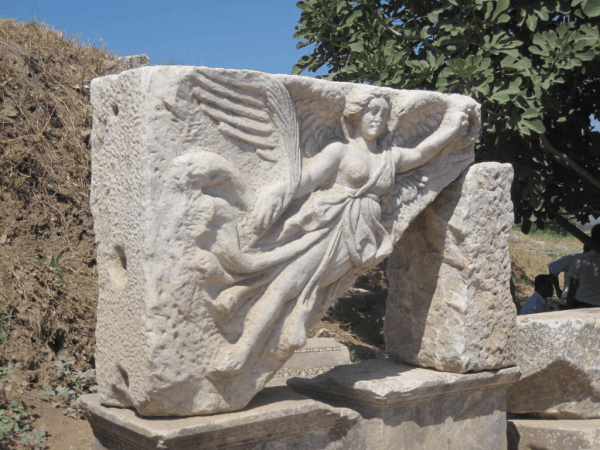 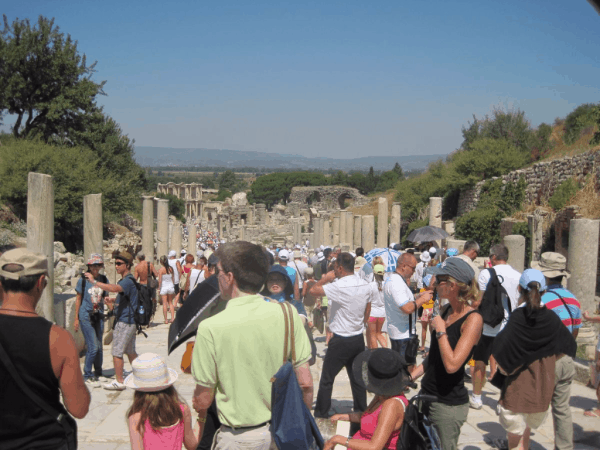 The more we walked the more the situation worsened until I was finally pleading with the kids to just behave so that we could see the Terrace Houses and the Library before we headed back to port. 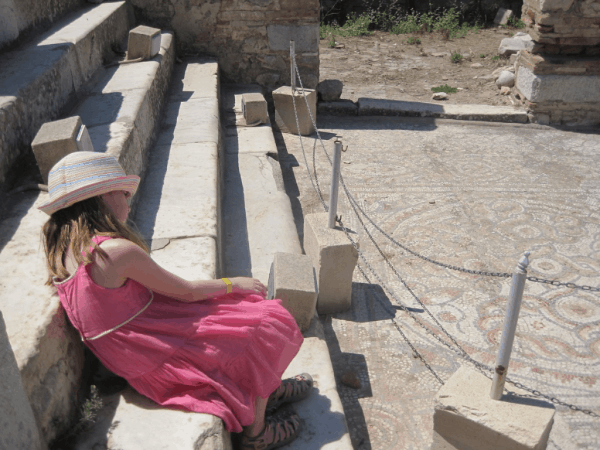 Hot and tired from the get go 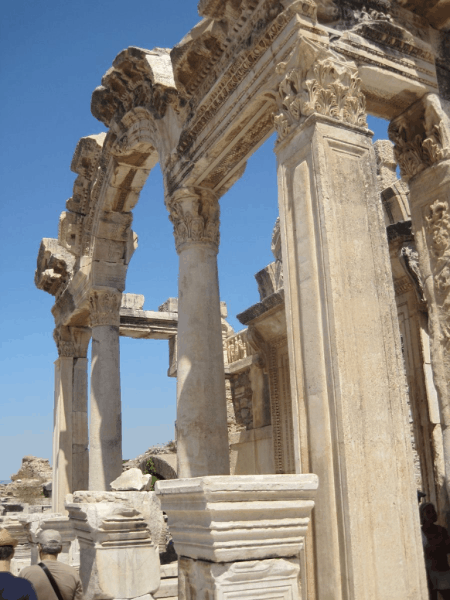 Carving of Medusa on the Temple of Hadrian

The Terrace Houses are located on a hill opposite Hadrian’s temple and are a series of six houses which would have housed wealthier members of the community.  This area is an active excavation site which is covered with protective roofing and has metal stair structures throughout that visitors walk on in order to view the houses.  The mosaic floors and wall frescoes that have been unearthed are incredible to see.  The oldest of these houses dates back to the 1st century BC and was in continuous use until 700 AD.  Visitors must pay a separate fee to view the Terrace Houses and large groups cannot be accommodated which means that large tour groups usually miss seeing this highlight of Ephesus. 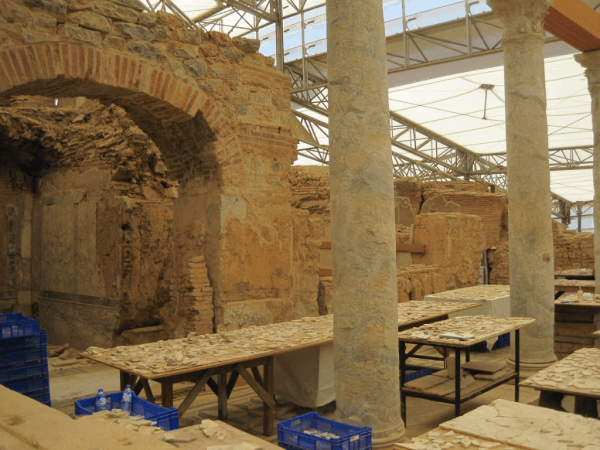 Ongoing work in the Terrace Houses 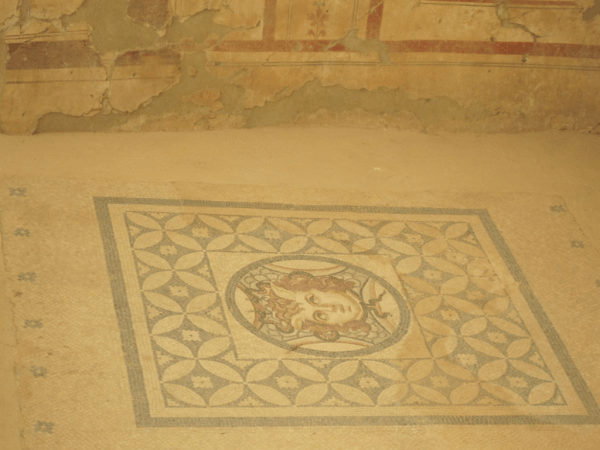 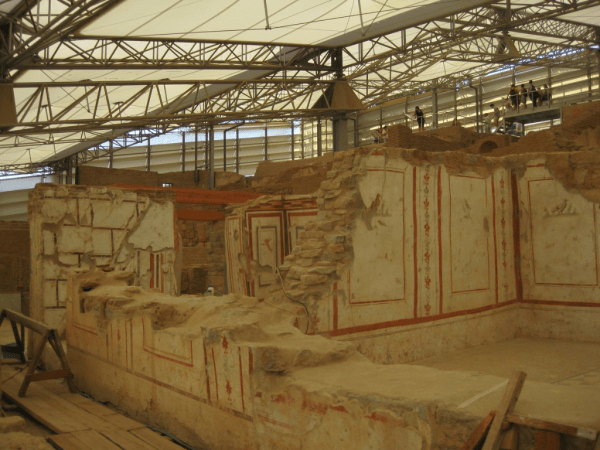 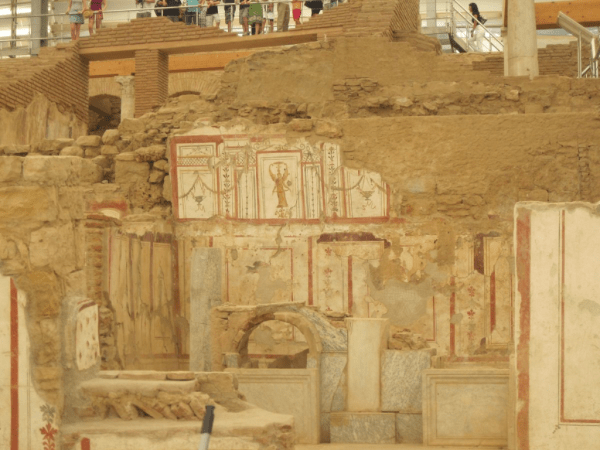 Our tour through the Terrace Houses was rushed because of the bad mood of both girls.  This was bad enough and then near the exit of the site, Katie slipped and fell down a set of metal stairs and banged herself up quite badly.  Iksender was quite worried that she might have hit her head and would have liked to call an ambulance but we opted to just sit and rest until she felt well enough to move on.

Once we were able to leave the Terrace Houses we stopped to snap a few photos with the Library of Celsus before departing Ephesus.  The two-story Library of Celsus is one of the most beautiful pieces of architecture in Ephesus.  This ancient Roman building was built by a Roman consul as a memorial to his father and once held more than 10 000 scrolls and books.  The Library has undergone a massive restoration that has seen the front facade meticulously rebuilt and is now one of the most recognizable symbols of Turkey. 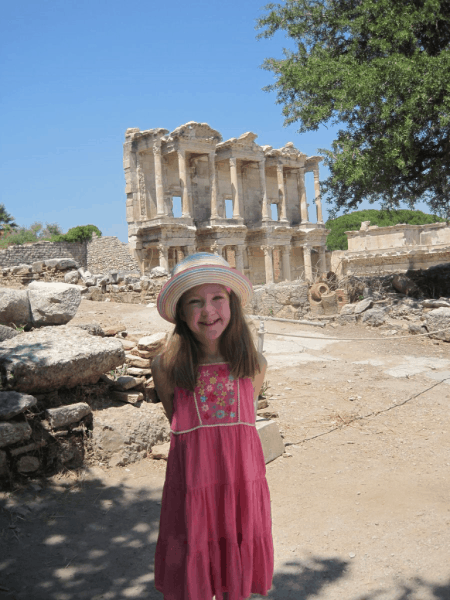 Emma at Ephesus, the Library in background 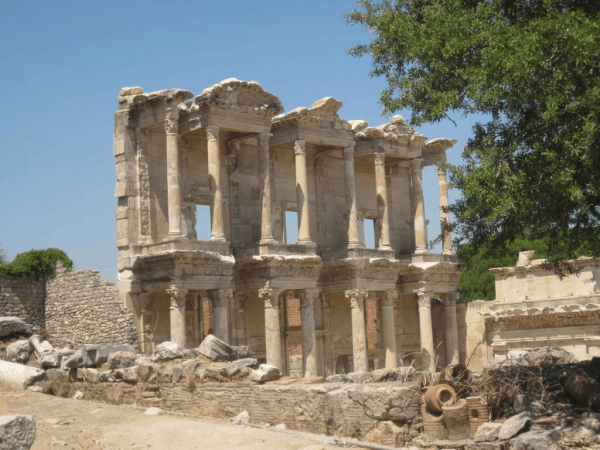 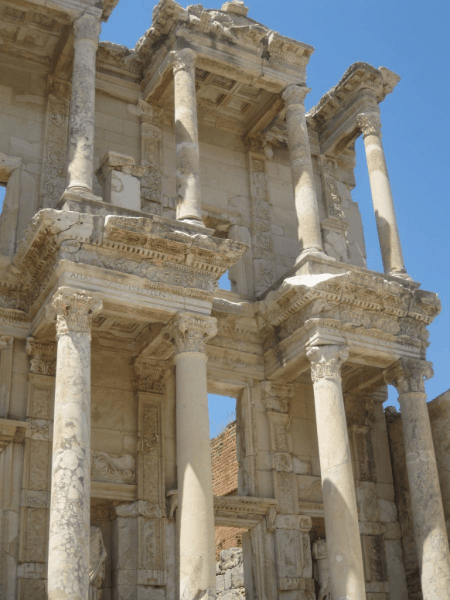 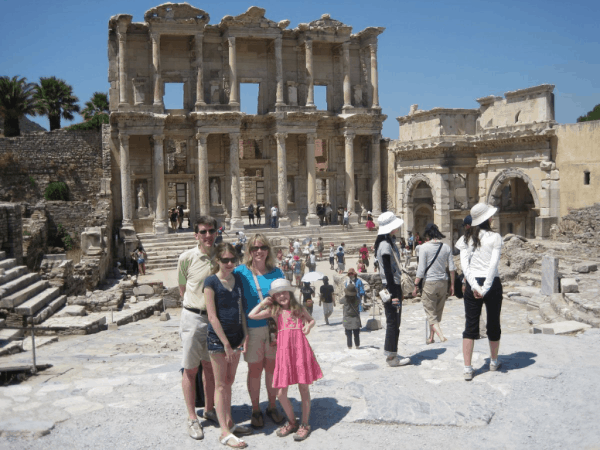 Our “happy” family shot at Ephesus

We departed Ephesus more or less intact and headed back to the port.  Iksender asked if we would like to stop at one of the carpet-making schools, however, we declined as we thought it best to get Katie back to the ship to rest.  When we arrived back at Kusadasi, my husband escorted Katie back to the ship while Emma and I stopped for a break at the Starbucks located in the Scala Nuova shopping mall within the port.  This has got to be one of the most picturesque Starbucks locations in the world as you can sit outside looking over the beautiful turquoise waters of the Aegean while sipping a latte or frappucino.  The refreshments at Starbucks provided the rejuvenation that Emma needed to head out eager to explore a little more of Kusadasi. 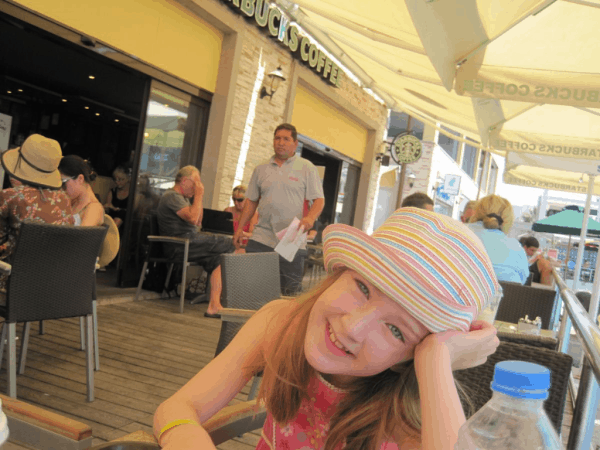 Having a break at Starbucks in Kusadasi 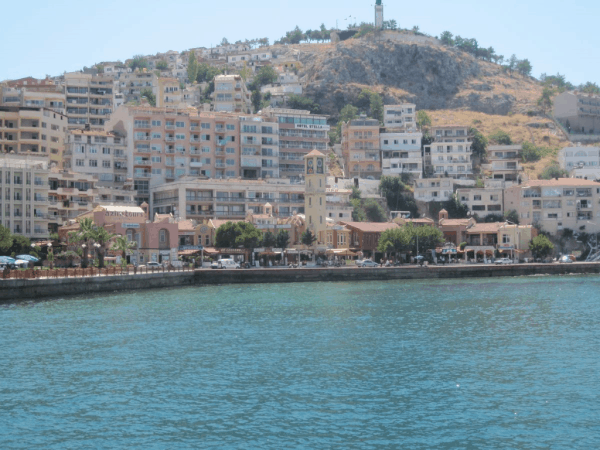 The view from our table at the seaside Starbucks

When my husband rejoined Emma and me, the three of us set out to walk to Pigeon Island.  We discovered a playground that young kids would love just outside the port area although Emma was not in the right frame of mind for climbing and playing. Pigeon Island is connected to the mainland by a causeway and is a pleasant walk from the port.  The Fortress of Kusadasi, a 13th century Byzantine castle which was built to defend the town from attacks by sea, takes up most of the island.  Walking around the battlements of the fortified walls provides excellent views of the waterfront of Kusadasi.  We had a very pleasant time strolling around the island which made up for the rough start to the day. Taking a walk to Pigeon Island Enjoying the view from Pigeon Island

We had planned to visit the bazaar in Kusadasi to do some shopping, however, by the time that we had returned to the port from our walk to Pigeon Island we just did not have the energy left so we had some ice cream and called it a day.

Kusadasi is a beautiful seaside town and the ruins at Ephesus are incredible.  I would have loved to have had the time to do them justice.  Unfortunately, the summer heat in August is unbearable for those of us who aren’t used to those temperatures.  If I could rewind that day then I would have let Katie stay on the ship and perhaps events would have unfolded differently.  It can be difficult when traveling, particularly with children, to know when to stop if plans have gone off the rails and when to forge ahead.  This was an instant where I made a bad call and the results were unfortunate.

An Impromptu Pottery Class in Istanbul