Review of Stack the Countries app for iPhone and iPad.

Shortly before traveling this summer I came across the game Stack the Countries which is available for both iPad and iPhone ($1.99 ) and I downloaded it on to both of these devices.  The game involves answering a series of geography questions in order to “earn” a country and the object of the game is to earn all of the countries of the world (195 in total).  It was probably the best $1.99 that I have ever spent based on the amount of entertainment the game has provided our family. Some questions are quite hard (Juba is located in which country?) while others are relatively easy (The CN Tower is a landmark of this country?).  Recognizing the flags of countries is also very important – I’m quite bad at this but Emma is very good.  With each question four possible answers are offered and if the player selects the correct country then it may be stacked on the platform.  The object is to stack countries high enough to reach a bar near the top of the screen.  Country game pieces are the same shape as the actual country and sized proportionately so that a country such as Barbados is a very small piece, whereas Canada is very large.  Countries have to be carefully stacked or they will topple and it will take much longer to complete the round and “earn” a country.  Once the countries are stacked as far as the bar then a random country is earned (provided that the player has answered at least 50% of the questions correctly). There are also two bonus games which are unlocked after a threshold is met.  Map It requires a player to select a continent and then place each country on the map by tapping its correct location.  In the second bonus game Pile Up a player selects the difficulty level and then several countries are dropped onto the platform and must be correctly identified.  If this isn’t completed quickly enough then more countries drop and they will eventually pile too high and the game will be lost.

Everyone in our family has enjoyed playing this game.  There is something addictive about stacking those googly-eyed countries and the kids don’t even realize that they are learning geography facts while they are playing.  There is also a Stack the States version which we haven’t tried yet but I expect that it would be just as much fun.  We prefer the iPad version to the iPhone version simply because it is more fun with a larger screen.  This game is probably best for ages 8 and up and I wouldn’t hesitate to recommend it to anyone. 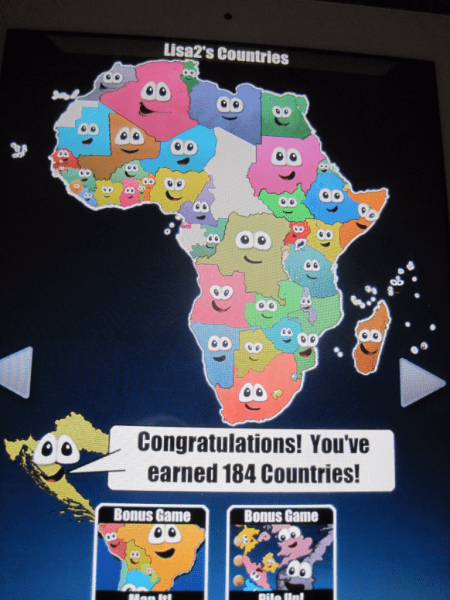