A trip to Black Creek Pioneer Village in Toronto, Ontario with kids is both fun and educational at the same time.

I recently accompanied my daughter Emma’s grade 3 class on a field trip to Black Creek Pioneer Village located in north-west Toronto.  The last time that I visited was with Katie’s class seven years ago and I had forgotten how much fun it is.  Yes, that’s right – two teachers, four parents and about thirty 8 year-olds and I had fun –  despite the downright chilly weather.

Black Creek Pioneer Village is a living history museum spread over more than 30 acres of country property which was once the farmstead of the Stong family.  It features both heritage buildings that are original to the farmstead as well as some that have been moved to the site from across the province.  These buildings have been furnished with period furniture and artifacts.  Historical interpreters and trades people in period dress are found around the property conducting demonstrations, answering questions and explaining how people lived in the mid 19th century in rural Ontario. The morning was spent with an informative guide who showed us around the site and talked about what life had been like in the mid 1800s.  Our group started at Hands On History, located in the Dominion Carriage Works building, where the kids were able to try a number of activities including carding wool, tying ropes for a bed, shingling a roof and building a log cabin.  The time passed very quickly and it was difficult to get them to pack everything up and move on.  Hands on History is open to the public on weekends, however, it closes for the winter as the building is not heated. Learning to card wool at Hands On History

Our next stop was the Doctor’s House where our guide explained medical practices of the day and showed the kids some of the tools that a doctor would have used to treat various ailments.  The large metal tooth extractor was probably the most interesting.  The sight of it would make anyone thankful for modern dentistry. Outside the Doctor’s House

Daniel Stong’s First House is a sturdy log cabin that is original to the site.  This is the oldest building in the village as it was built on the farmstead by the Stong family around 1816.  The three small rooms in the cabin are evidence of the simple life that the pioneers led.  The Stong family lived in this log cabin until 1832 when they built a larger home known as the Second House.  After they moved into the bigger house this log cabin was used as an outbuilding for storage and to keep poultry. As the Stong family became more prosperous they were able to build the Second House which is a fine 2-story home that provided plenty of space for the growing family.  Elizabeth Stong would, no doubt, have been quite pleased that her new home was outfitted with a brick fireplace and bake oven instead of the simple stone fireplace that she had to cook over in the log cabin. Another popular building with the kids was Dickson’s Hill School which is a great example of the one-room school house that was typical of the time period complete with a dunce cap that our guide explained had to be worn by naughty children who were sent to stand in a corner. 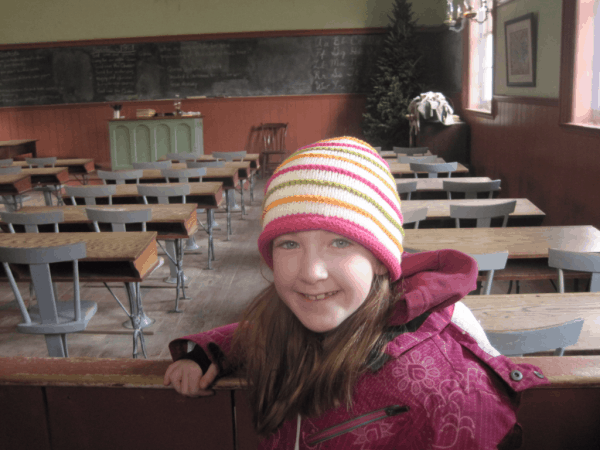 Emma in the one room schoolhouse

Black Creek Pioneer Village also provides guests with a glimpse of how farming took place during the middle of the 19th century.  A number of heritage breeds of animals are kept in the village and historical interpreters demonstrate how pioneer farmers cared for and used the animals.  The kids were quite surprised to learn that the large geese on the farm would have served as guard animals, warning the farmers if an intruder such as a weasel or a fox had wandered into the farmyard. After lunch we had a bit of free time so our group explored the Half Way House Inn, Roblin’s Mill, the Taylor Cooperage and the Tinsmith Shop.

The kids had a great time at the Half Way House which is an example of the type of tavern which would have served as a resting place for stagecoach passengers.  The kids explored the Inn from top to bottom and took turns playing crokinole in the front room.  The delicious smells of home baking wafted through the Inn as the kitchen at the back of the house sells baked goods. Emma with Black Creek’s Half Way House in the background

Roblin’s Mill is the only operating stone mill in Toronto and tradesmen working there explained the operation of the mill to the kids and patiently answered all of their questions.  We weren’t able to see the mill operating, however, as it had already been closed down for the winter. 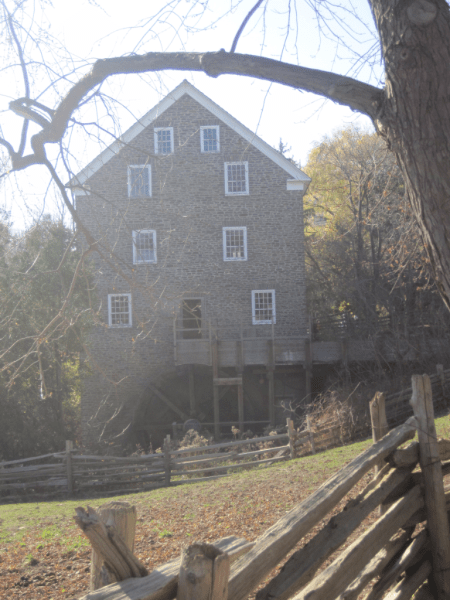 The Tinsmith Shop was also a big hit with the kids as they were able to watch a tinsmith created beautiful objects by punching indents into a piece of tin. There are many more buildings on the site that would be fascinating to explore if more time had been available.  This is definitely a place where a family could spend the better part of the day exploring and learning about pioneer life.

The Village is especially pretty at this time of year as it is being decorated for the Christmas celebration Christmas Remembered which runs from November 19th to December 18th this year.  I even had a few minutes to pop into the gift shop and buy a handmade tin star to hang in the window for Christmas.  I enjoyed the day so much that I definitely would like to return soon and stroll through the village at a more leisurely place. A History Lesson at the Laura Secord Homestead 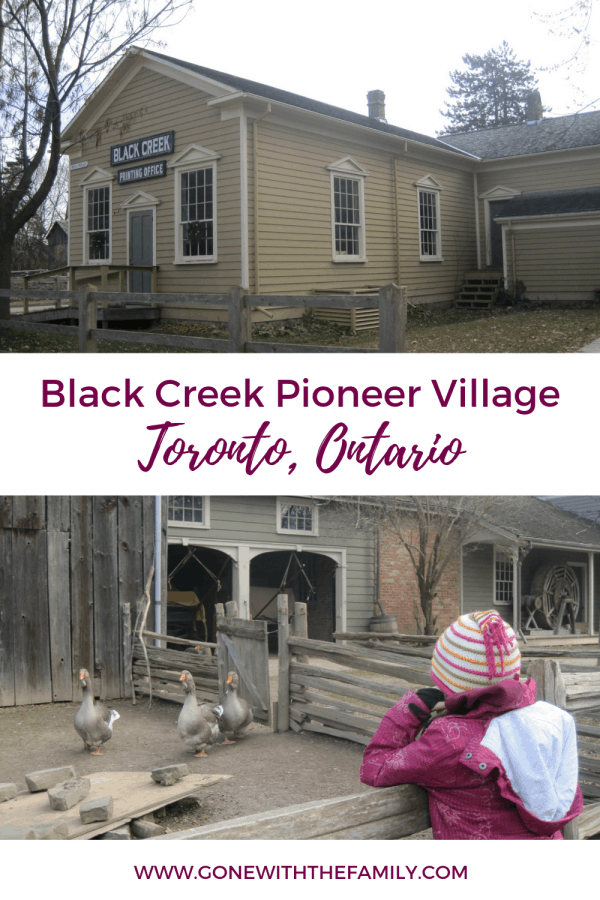