Our family spent two wonderful days in St. Petersburg, Russia while cruising the Baltics on the Emerald Princess.  On the second day of our private guided tour we cut short our visit to the extremely busy Hermitage because Emma, who had only just turned 6, was not dealing with the crowds very well.  As a result, we wrapped up our tour earlier than intended and, as we were leaving St. Isaacs’s Cathedral, our tour guide, Anna, suggested that we go for a walk so that she could show us a little more of her city. I’m so glad she did because in all the rush of trying to see St. Petersburg in two days we had seen a lot of famous sites but we hadn’t really had time to slow down and savour the city.  We walked from St. Isaac’s to Senate Square which I would probably have described as a park rather than a city square.  The wide, open space for kids to run around  was a welcome change from the crowded historical sites that we had been visiting.  There were many tourists in the Square, however, there were also plenty of locals enjoying the gorgeous, sunny day that is so rare in St. Petersburg.  Senate Square is ringed by important buildings such as the Admiralty building and the Senate and Synod building, however, it is the famous statue of The Bronze Horseman that draws the tourists.

The Bronze Horseman is an equestrian statue of Peter the Great which was created by French sculptor Etienne-Maurice Falconet and has become one of the symbols of St. Petersburg.  It takes its name from Alexander Pushkin’s famous poem about Peter the Great and the founding of the city.  The statue depicts Peter symbolically leading his people as he points at the Neva River while his horse tramples a serpent that represents all those opposed to his reforms.  The statue’s pedestal is a single piece of granite known as The Thunder Stone which, at about 1500 tonnes, is claimed to be the “largest stone ever moved by man”.  The statue was unveiled in the Square in August of 1782. 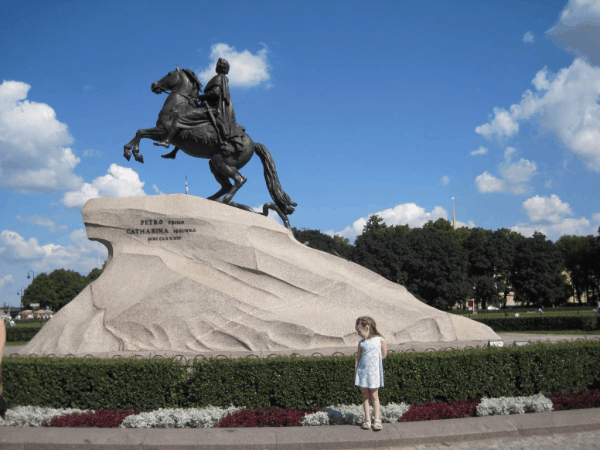 Emma at The Bronze Horseman 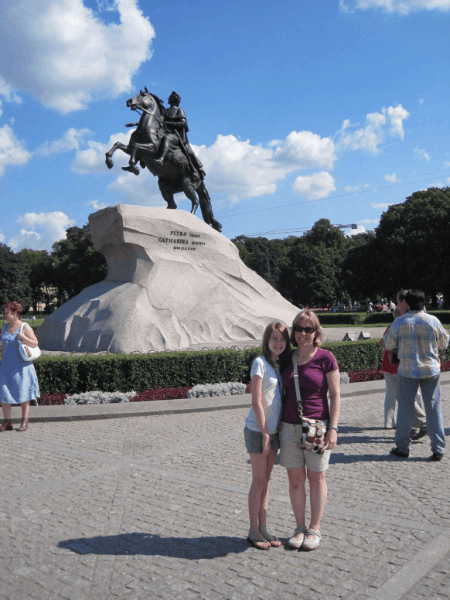 Katie and me at The Bronze Horseman

This was the final stop on our two day tour of St. Petersburg and, although it hadn’t been planned, I’m now thankful that we took the time to learn more about this important part of the city’s history.