The McMichael Canadian Art Collection, located in Kleinburg, Ontario, exhibits the distinctly Canadian landscape work of The Group of Seven and their contemporaries as well as First Nations, Inuit and other Canadian artists. It’s a great choice for families wanting to experience an art gallery with their children.

One of the best art galleries in Canada can be found in the village of Kleinburg, just a short drive north of Toronto.  It's a great choice for families who want to experience an art gallery with their children as kids seem drawn to the landscape art (particularly if they have studied the Group of Seven in school); the gallery is not too large so it's easy to spend 2-3 hours and see the collection; there is great programming for families, particularly on weekends; and the extensive grounds and walking trails are a great way to burn off some energy while exploring outdoors.

The McMichael Canadian Art Collection began when Robert and Signe McMichael purchased land and built a pioneer-style home in the village of Kleinburg.  Their surroundings inspired them to begin collecting works of art by Tom Thomson and the Group of Seven because these artists drew their inspiration from the natural landscape.  The collection grew in size and importance and in the mid 1960s the couple donated their collection as well as their home and property to the province of Ontario.  Today the facility is about 85 000 square feet and includes close to 6 000 works of art.  The gallery has maintained its focus on Tom Thomson, the Group of Seven and their contemporaries, however, it has also broadened its scope to include work by First Nations, Inuit and other Canadian artists.

In the early 20th century a group of Canadian artists, who became known as The Group of Seven, agreed that they would use their art to record the rugged Canadian wilderness.  The original members of the group (Lawren Harris; J.E.H. MacDonald; Arthur Lismer; Frederick Varley; Frank Johnston; Franklin Carmichael; and A.Y. Jackson) opened their first exhibit as The Group of Seven in Toronto in 1920. The group eventually expanded to include 10 members.  Another artist, Tom Thomson died tragically at the age of 40 prior to the actual formation of the group, however, his landscape work, particularly of Algonquin Park, became synonymous with the Group of Seven.  These men are among the most famous of Canadian artists and the McMichaels determined early on that it was this work that they wanted to collect.

The McMichael is a gallery that doesn't limit itself to indoor exploration.  There is a sculpture garden on site and the grounds also have extensive walking trails.  The outdoor space adds to the family-friendliness of the gallery as it is a great spot to burn off some energy either before or after the car ride to the McMichael. 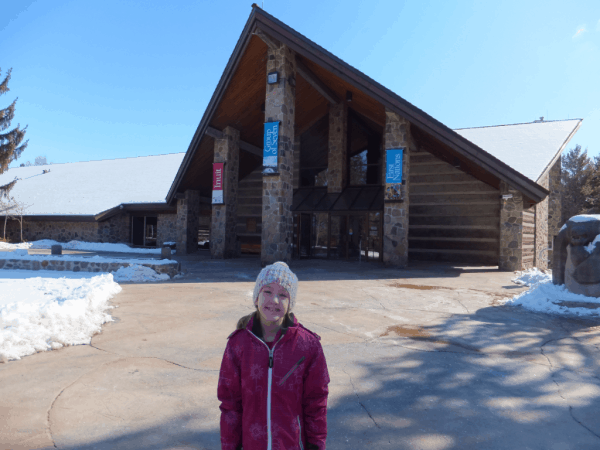 One of the buildings on site is the Tom Thomson shack which the McMichaels purchased and moved to their property.  It is a shed which Thomson used as a studio while he was working in Toronto. 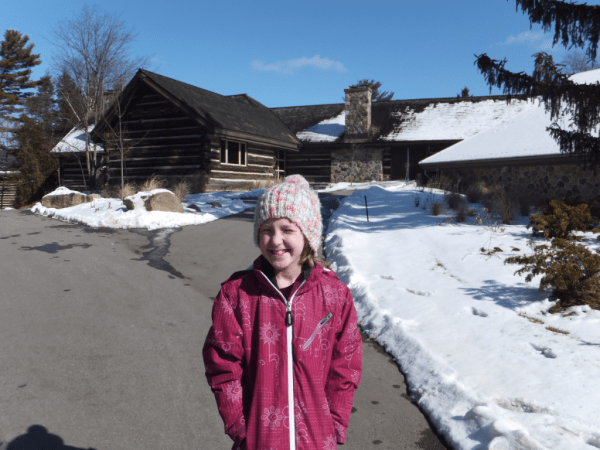 Exploring outside the McMichael Gallery

The lobby of the gallery continues to reflect nature and the ruggedness of the Canadian landscape with its soaring stone pillars and timbered ceiling. 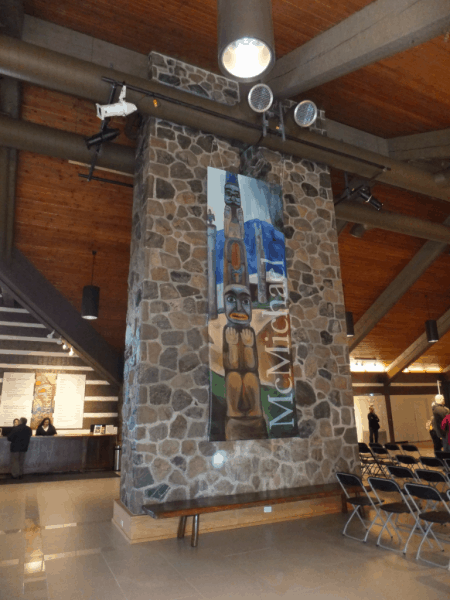 The lobby of the McMichael Gallery

There is no photography allowed in the gallery, however, this banner is representative of the type of work the Group of Seven produced. 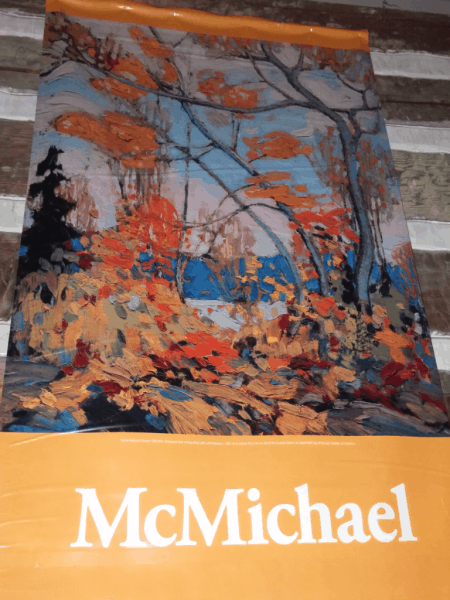 There are sculptures outside that kids find quite interesting including a Sculpture Garden of work by artist Ivan Eyre.  His twice-life-size bronze sculptures are set amidst the trees on a winding path and would be fun to explore on a nice day.  We plan to return in better weather to explore the grounds and walking trails a little more thoroughly. The McMichael Gallery is located in the historically designated village of Kleinburg.  The picturesque village, which was founded in 1848, has a charming main street with galleries, boutiques, gift shops, restaurants and cafes.  In the fall, the village celebrates Binder Twine Festival which is a tribute to the days when farmers came to town to buy twine for binding their sheaves of wheat.  These days it is an fun-filled day of crafts, entertainment, food and activities, including the crowning of the Binder Twine Queen. 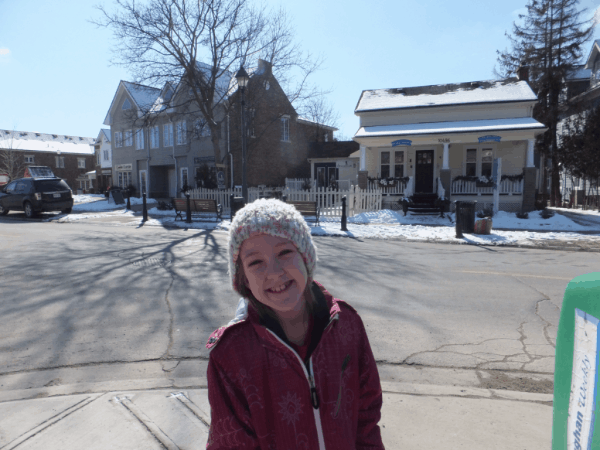 Strolling the streets of Kleinburg

One of the most interesting shops, from an architectural standpoint, is Terracotta which is a historic log building that is now used as a home and garden store. Emma outside historic log building in the village of Kleinburg 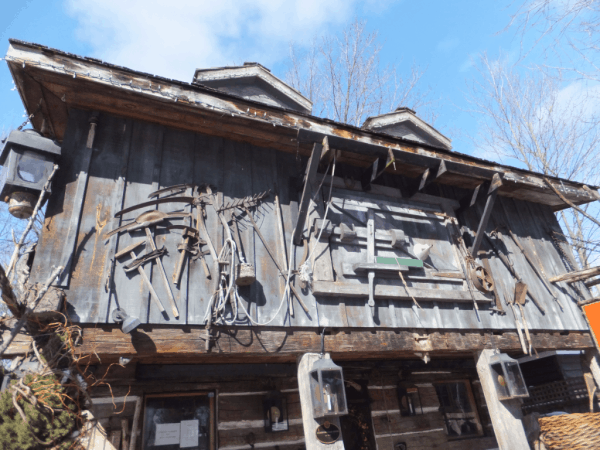 We even found a quaint little Starbucks on Main Street which had a sitting area with an old stone fireplace that looked original to the historic building.  (Emma now thinks that we should start a section on the blog where we take photos of her at Starbucks around the world so don't be surprised to see more Starbucks shots to come.) 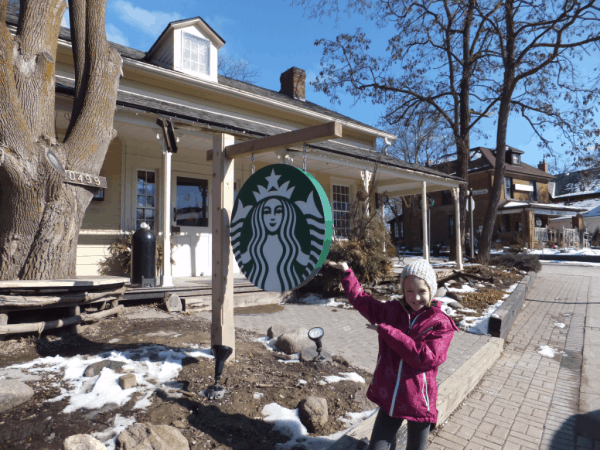 Outside Starbucks in Kleinburg

Kleinburg is just a short drive north of Toronto and a great town to visit with kids.  Families will enjoy admiring the art at the McMichael Canadian Art Collection or participating in some outdoor activities at the nearby Kortright Centre for Conservation.  Either can be followed by a stroll down Kleinburg's Main Street for a little shopping and something to eat to cap off the day.

What You Need to Know

9 Tips for Taking Kids to an Art Museum