As part of the recent TBEX travel media conference held in Toronto I was able to take a tour called “World in a City” which visited and provided an overview of several of Toronto’s best known ethnic neighbourhoods – Koreatown, Little Italy, Chinatown, Little India and Greektown.

Toronto is a multi-cultural city that has a population of 2.79 million people (5.5 million in the Greater Toronto Area) and according to the City of Toronto website there are 140 different languages or dialects spoken here. It is also noteworthy that half of Toronto’s population was born outside of Canada and more than 30% speak a language other than English or French at home – making it one of the most diverse cities in the world.

Our tour guide, John Lee, is a local entrepreneur with extensive knowledge of the city’s neighbourhoods. John immigrated to Canada from Korea with his family in the 1960s and has lived in several of the downtown neighbourhoods. He also has indepth knowledge of the best places to eat in the city through involvement in the restaurant and food industry for years. He is currently the owner of Chippy’s Fish & Chips (now closed), teaches at George Brown College’s Chef School and works as a freelance writer and consultant. John’s lively commentary and extensive knowledge of the neighbourhoods that we visited and of Toronto’s recent history was the highlight of the tour.

Little Korea or Korea Town is the business area located along Bloor Street West between Christie and Bathurst streets and is the perfect place to experience Korean food and culture in the city. The area developed with the influx of Korean immigrants to Canada in the 1960s and is home to a wide range of Korean businesses although many of the business owners no longer reside in the area. Each spring on the first weekend of June, the Business Association holds the Dano Festival at Christie Pits Park to celebrate Korean culture with martial arts demonstrations as well as traditional music and dance and, of course, traditional foods to sample.

The Little Italy neighbourhood, located in the College Street area between Ossington and Bathurst, formed early in the 20th century with the influx of Italian immigrants to Toronto. The area is well-known for its Italian-Canadian restaurants and vibrant nightlife although the area is now much more ethnically diverse than it once was. The popular Taste of Little Italy festival which has been held in mid-June for the past 14 years draws visitors to the College Street neighbourhood to eat, drink and shop Italian.

We had a short walk around the neighbourhood before pausing at Riviera Bakery for a sweet treat and there were so many delicious-looking pastries that it was difficult to choose.

Toronto’s Chinatown, which is one of the largest in North America, is probably the best known of any of the city’s ethnic neighbourhoods and is a big tourist draw as well as being popular with residents. The heart of Chinatown is located around Dundas St. and Spadina Ave. in the Kensington Market neighbourhood of the city.

The Chinese first started to settle in this area in the 19th century and Chinatown had become an established neighbourhood by the 1930s. The neighbourhood relocated a couple of times and is now a thriving part of Kensington Market with restaurants and shops aplenty. The Toronto Chinatown Festival and Chinese New Year are both exciting times to visit.

We walked in the neighbourhood while John filled us in on the history before we grabbed lunch to go at a Vietnamese sandwich shop.

The neighbourhood of Little India, also known as the Gerrard Indian Bazaar, is located on a few blocks on Gerrard St. East and could more accurately be described as a South-Asian-Canadian neighbourhood. The Bazaar is the largest marketplace of South Asian goods and services in North America and includes not only Indian businesses but Pakistani, Bangladeshi, Afghan and Sri Lankan with many restaurants and shops selling colourful saris and other wares.

Located along Danforth Avenue, Toronto’s bustling Greektown is the largest Greek neighbourhood in North America according to the neighbourhood business association and the Taste of the Danforth festival, which showcases Greek food, culture and music, is one of the city’s signature events.

Unfortunately, we had run out of time on our tour and were only able to drive through Greektown so I will have to make a point of returning very soon in order to experience the neighbourhood.

It had been many years since I had been to most of these Toronto neighbourhoods so I enjoyed the visits, however brief, and the tour inspired me to make more of an effort over the next few months to take my children into the city to experience the best of multicultural Toronto. 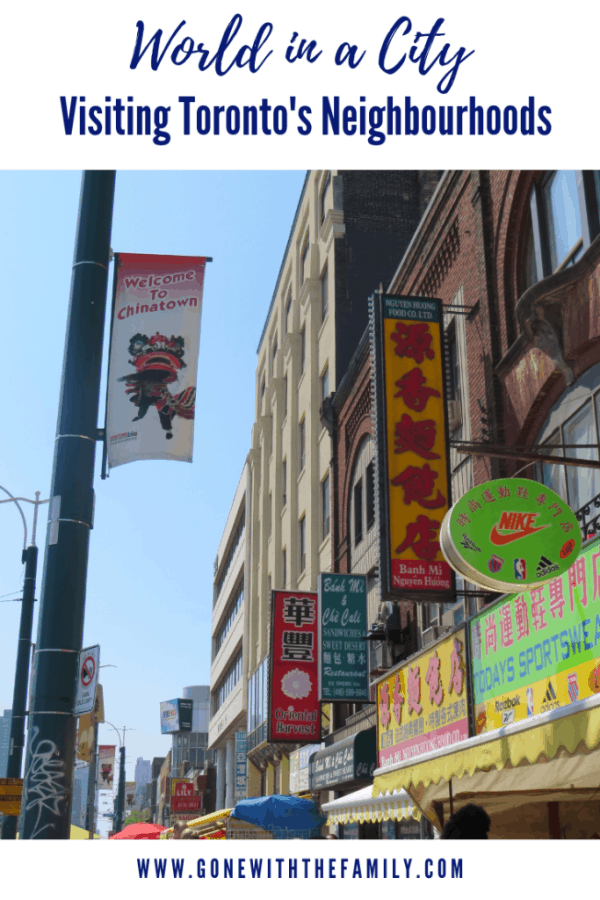