A private tour from London to Stratford-upon-Avon

On our first family trip to London, an incredibly fun full day Harry Potter tour with London Taxi Tour was a highlight. For that reason, the company was top of our list when we were investigating a day trip to Stratford-upon-Avon for our recent summer vacation.

We opted for a full day Stratford-upon-Avon tour (10 hour) and were thrilled to learn that our driver/guide would be Gordon, the same gentleman that had made our 2010 tour so memorable. Gordon picked us up from our hotel, Citadines Trafalgar Square, first thing in the morning and we headed out of London. (As compared to our earlier Harry-Potter themed tour, this day out was more about my interests than those of the kids. Touring the Shakespeare houses probably would not have been their choice but we often choose activities when we are traveling specifically around their passions so I didn’t think it would hurt them to indulge mine for the day.)

The lovely town of Stratford-upon-Avon, located on the banks of the Avon River in rural Warwickshire, is best known as the birthplace of William Shakespeare. Visitors to the area enjoy the Shakespeare houses, lovely parks and gardens and, of course, the Royal Shakespeare Theatre Company which maintains a busy schedule of performances. 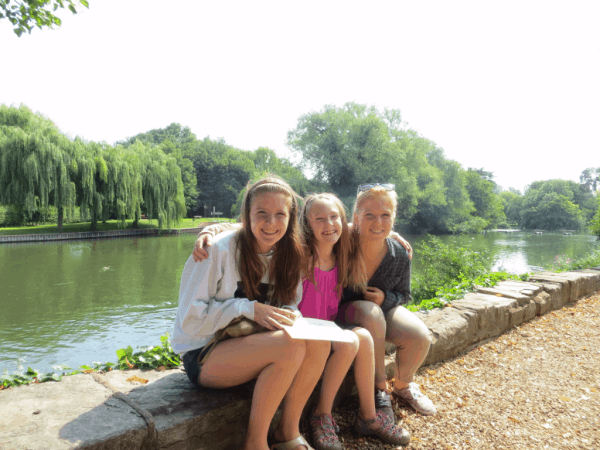 On the banks of the Avon river

As part of our day with London Taxi Tour, we were able to visit four of the five houses (we didn’t have time for Mary Arden’s Farm which is several miles outside of the town) as well as Holy Trinity Church. Our driver/guide, Gordon, dropped us off at each location and waited while we toured the site and then drove us on to the next location which was a very efficient way to travel between sites when we had a limited amount of time available. Visitors who are in town for longer than a day can enjoy a leisurely walk between the sites – apart from the farm.

Upon arrival in Stratford-Upon-Avon, our first stop was Shakespeare’s Birthplace on Henley Street. Shakespeare’s parents were quite wealthy and their home was large for the time. The home also had a workshop for his father’s glove-making business. 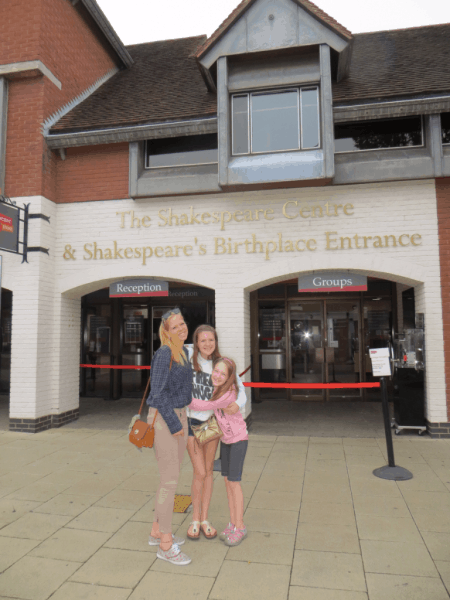 This is the home where Shakespeare was born in 1564 and where he lived until his mid-20’s. William inherited the home after his father’s death and turned it into a tavern. The house has been in the care of the Birthplace Trust since 1847. We briefly toured through the house to see the furnishings and the items on display and then headed into the garden at the rear. 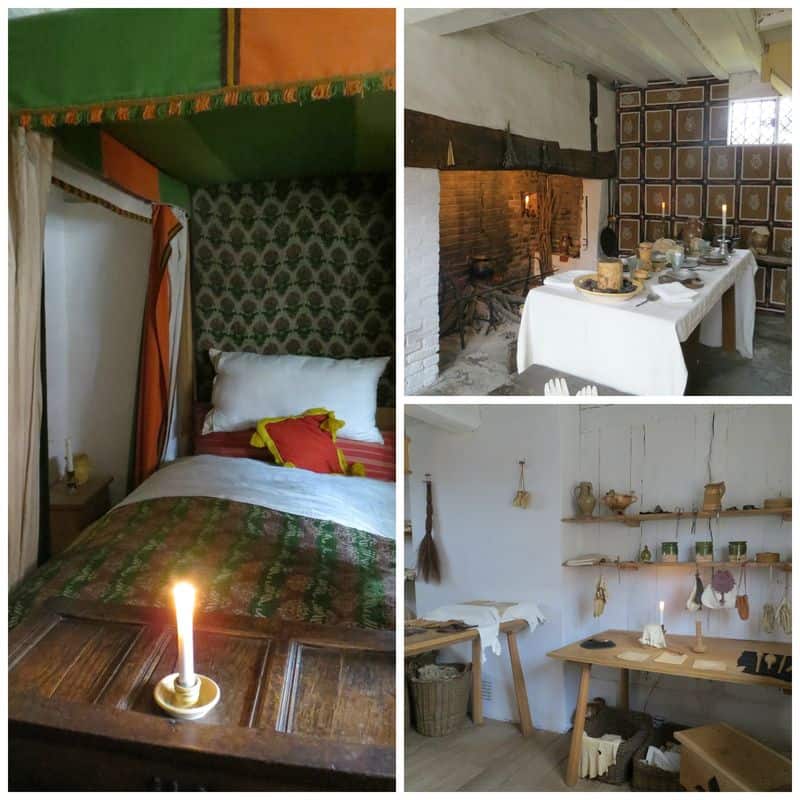 Touring the house where Shakespeare was born 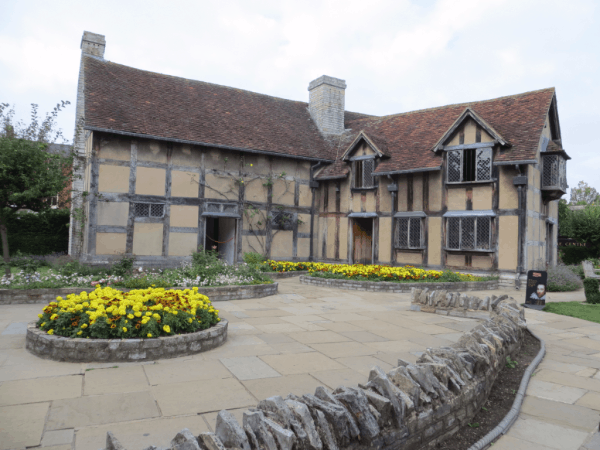 The garden at Shakespeare’s Birthplace

As part of the Shakespeare Aloud! program there is a troupe of professional actors on hand in the gardens to bring Shakespeare to life. The actors typically invite visitors to name their favourite play and the actors will then perform scenes from it. There was only one gentleman around at the time that we were there but he gave a valiant performance from Midsummer Night’s Dream as per Emma’s request. 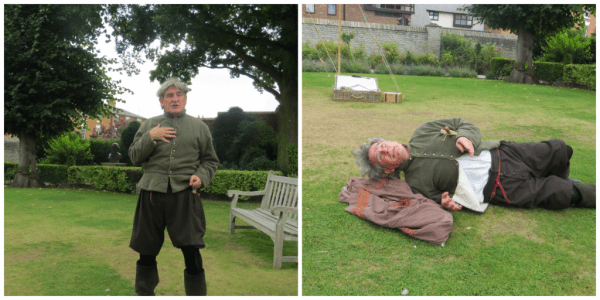 Shakespeare Aloud! performance in the garden

The Shakespeare’s Treasures Exhibition in the Shakespeare Centre displays objects from the collection of the Trust and the displays are rotated every few months so that return visitors will have an opportunity to see different items. 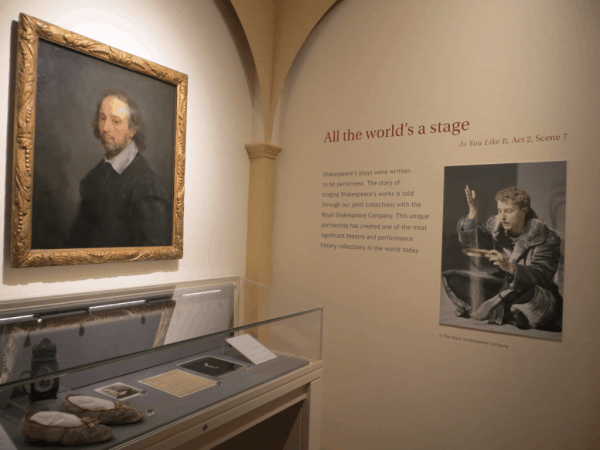 The second stop on our tour was Nash’s House which is a Tudor home that was named after Thomas Nash who was the first husband of Shakespeare’s granddaughter. Next door are the foundations of New Place which was Shakespeare’s final residence. Shakespeare purchased New Place in 1597 after he had become established as a playwright in London and lived in the home when he wasn’t in London until his death in 1616.

The main floor of the house is furnished as it would have been in the time that Nash lived there and upstairs is an exhibition space which is currently displaying a fun exhibit called the Top 10 Most Popular Characters in Shakespeare which the kids loved. Visitors are able to vote for their favourite character as well and a running tally of popularity is posted. A visit is made complete by a walk in the lovely gardens behind the house. 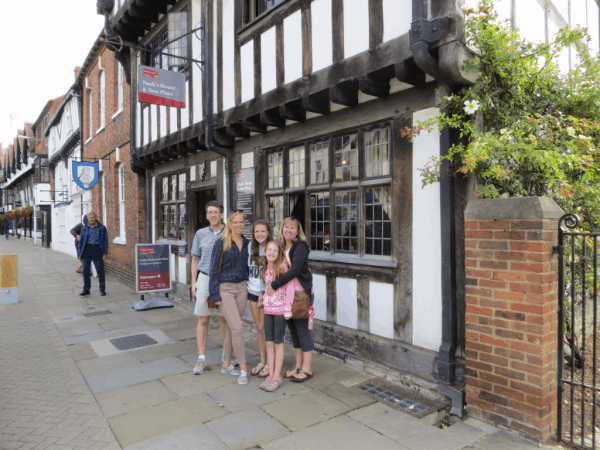 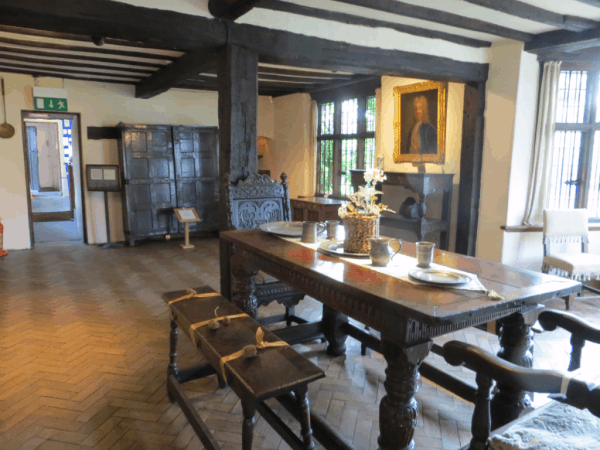 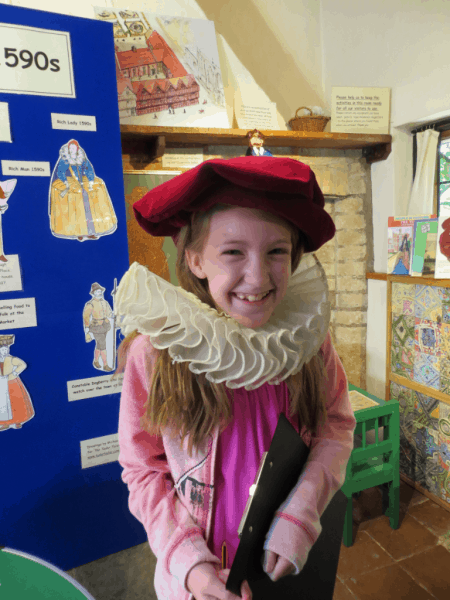 Dressing up at Nash’s Place 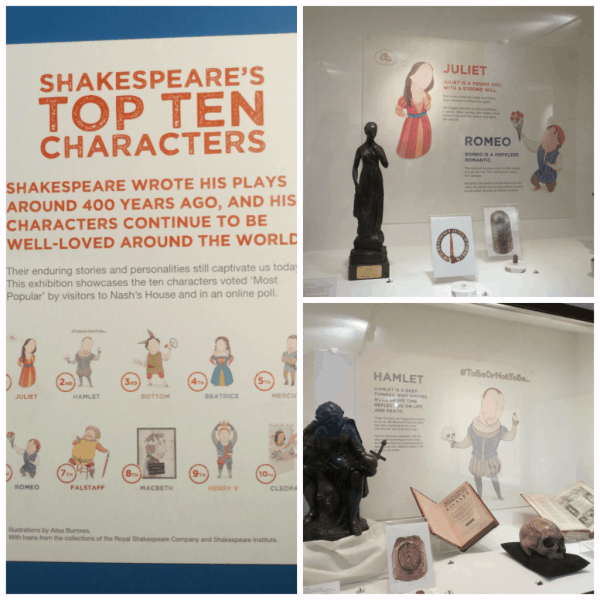 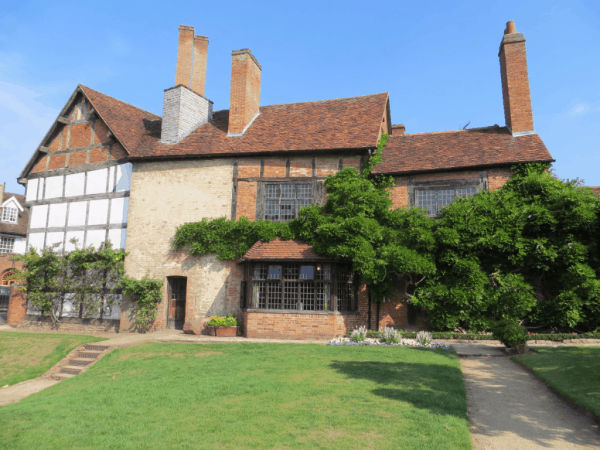 The exterior of Nash’s House 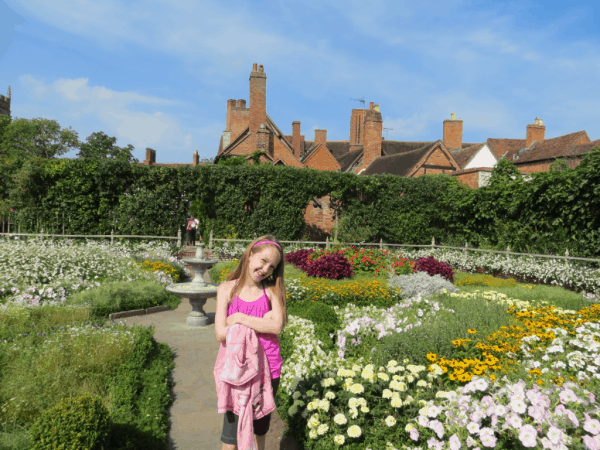 Enjoying the beautiful day in the garden at Nash House

Hall’s Croft was the home of Shakespeare’s daughter, Susanna, and her husband Dr. John Hall who was a wealthy physician. The furnishings of the house are indicative of the wealth of occupants. The consulting room has also been maintained with equipment and medical books/notes that Hall would have used. Outside there is a lovely walled garden with roses and herbs that the doctor would have used in his practice. 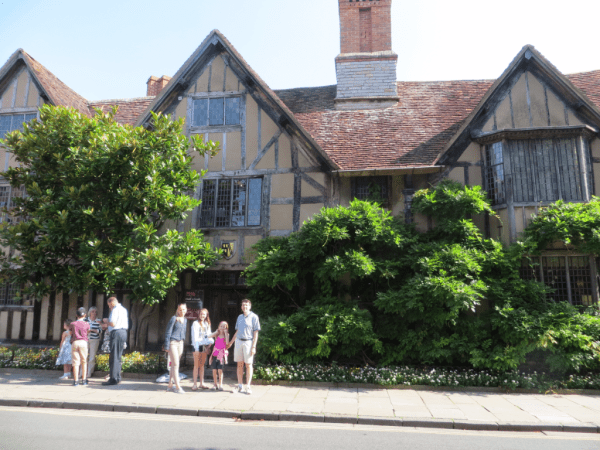 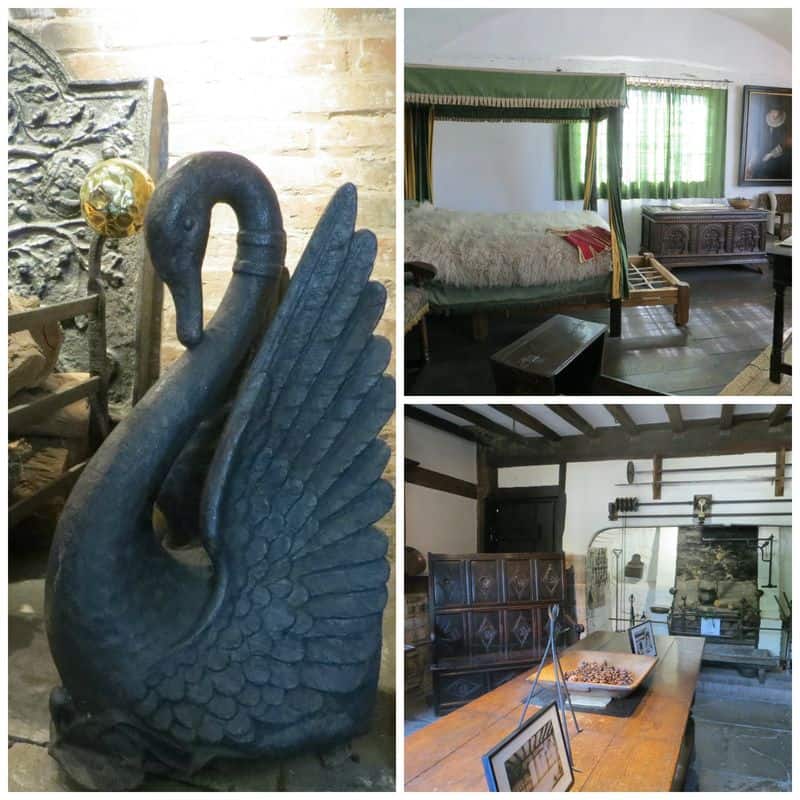 The interior of Hall’s Croft 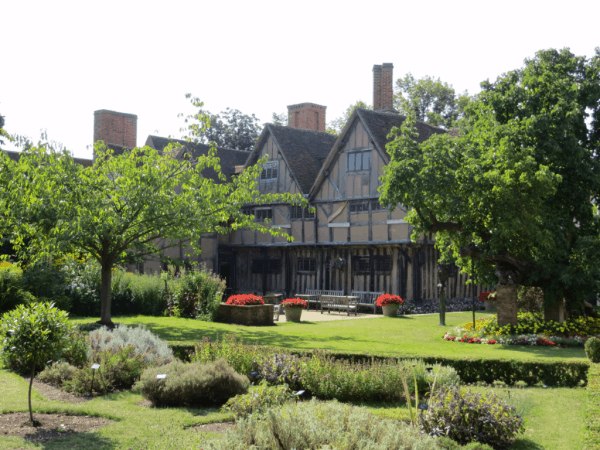 The gardens at Hall’s Croft

Our driver dropped us off in Stratford’s town centre to dine at The Vintner, however, lunch was not yet being served so we walked around town for a spell and admired the historic timbered buildings. After a tasty meal, we were off again to see Shakespeare’s burial site. 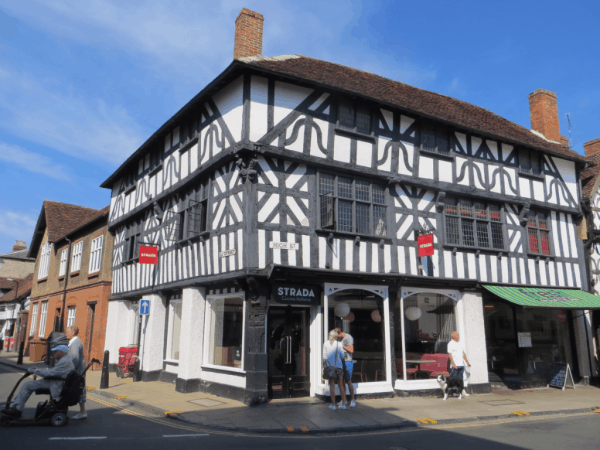 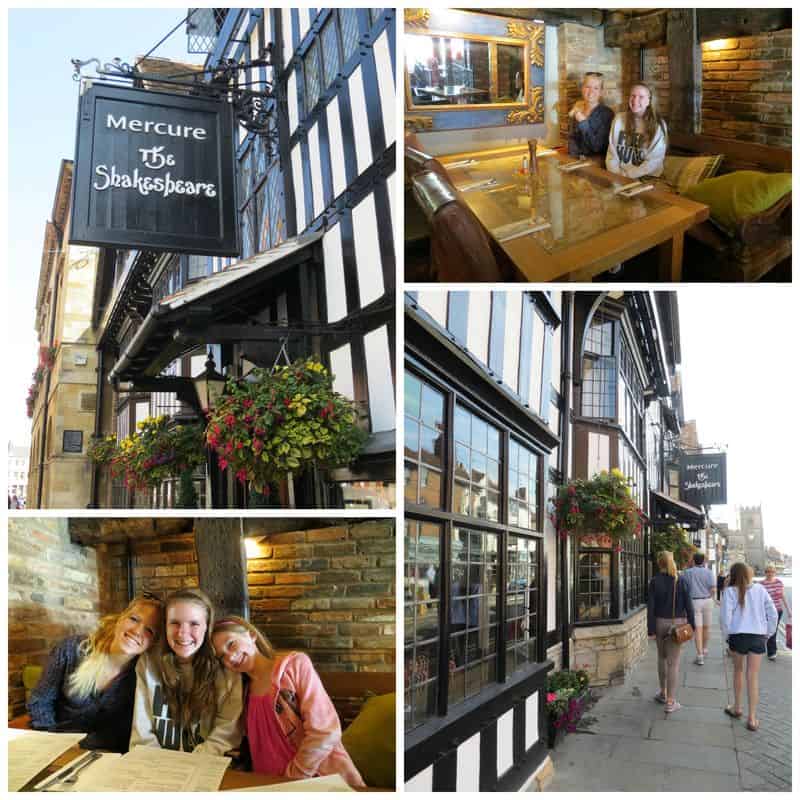 Taking a break from Shakespeare sightseeing

Holy Trinity Church, on the banks of the Avon River in Stratford-upon-Avon, is a thriving parish of the Church of England known as Shakespeare’s Church because this is where the playwright was baptised and where he is buried in the chancel of the church. Thousands of people visit each year to view his final resting place.

The church itself has stood for 750 years and worship has taken place on the site for more than 1,000 years. The limestone building is an excellent example of 13th century architecture – built in the shape of a cross with many interesting features including beautiful stained glass windows and a wooden door that still has the sanctuary knocker used by fugitives seeking safety within the church.

After viewing the interior of the church, visitors should take the time to walk around the property and alongside the river. The church has a graveyard with tombstones that are hundreds of years old which offer an interesting glimpse into Stratford’s history. 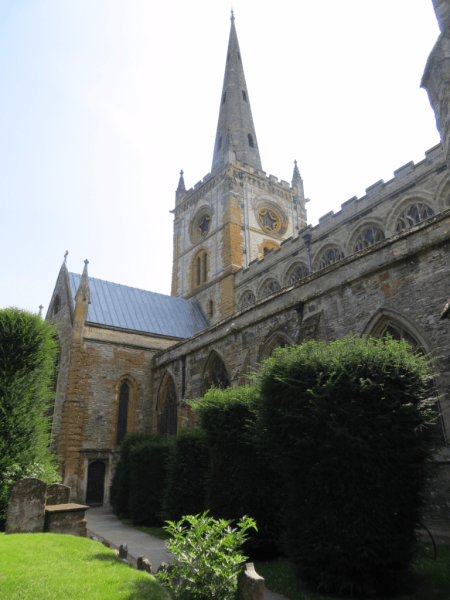 Holy Trinity Church along the banks of the Avon River 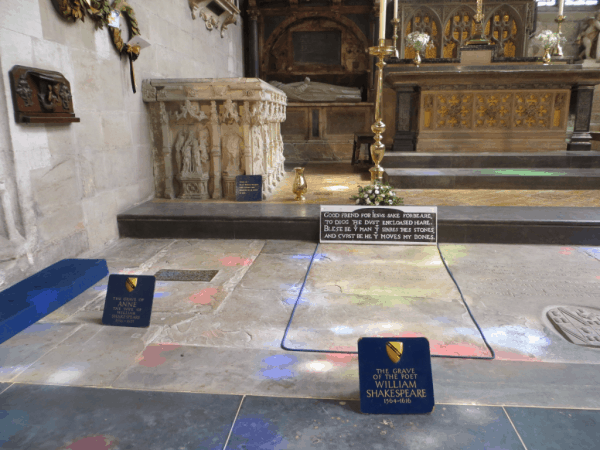 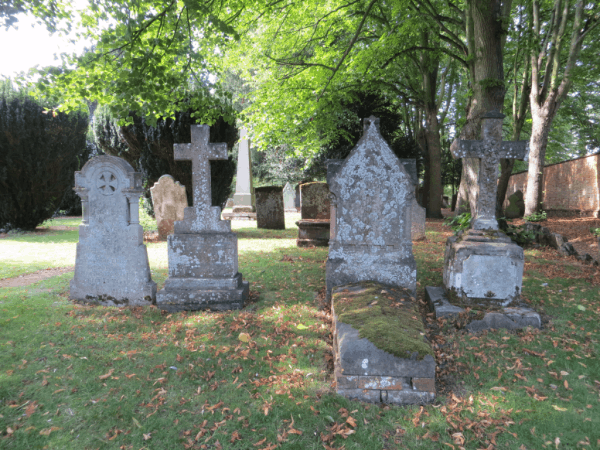 The graveyard at Holy Trinity 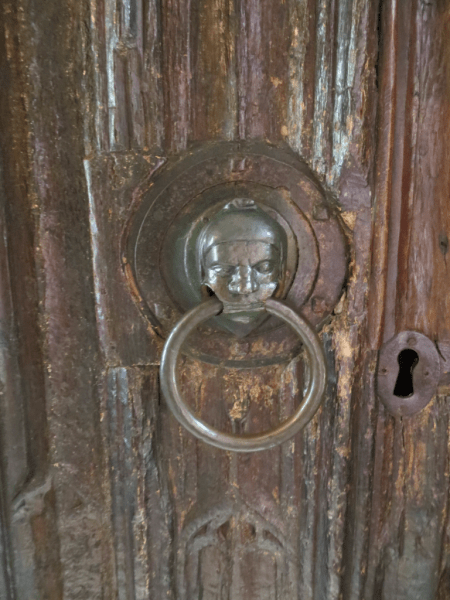 The highlight of the day for me was visiting the picturesque family home of Shakespeare’s wife, Anne Hathaway. The thatched cottage was Hathaway’s family home and is located about a mile from the town centre. The cottage is decorated with many original items of furniture which belonged to the family and there is a guide inside who explains the history of the home and the stories behind the artifacts.

There are several trails to follow through the beautiful gardens (including a fairy trail that Emma enjoyed), a singing tree, a lavender maze and a willow sculpture that frames a lovely view of the cottage. 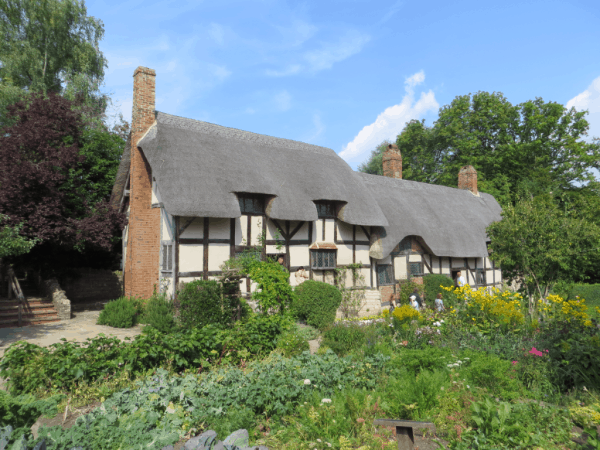 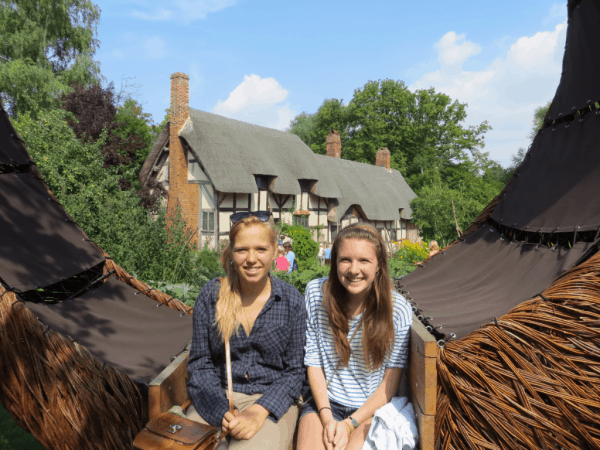 Relaxing on the garden’s Willow Sculpture 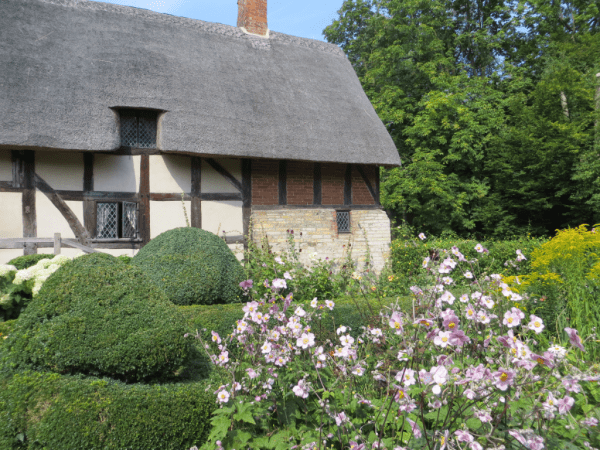 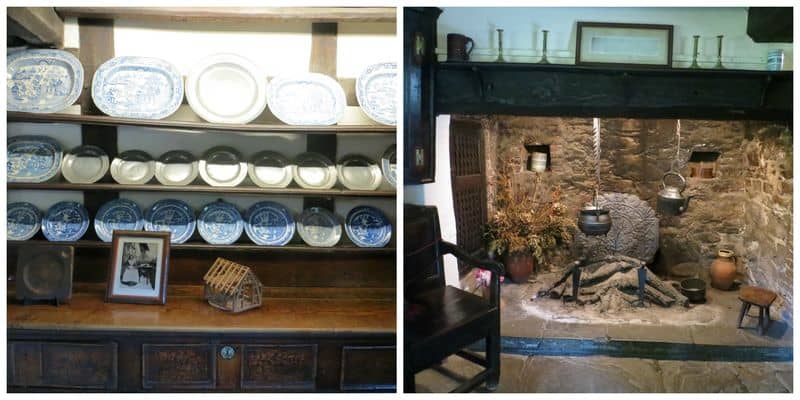 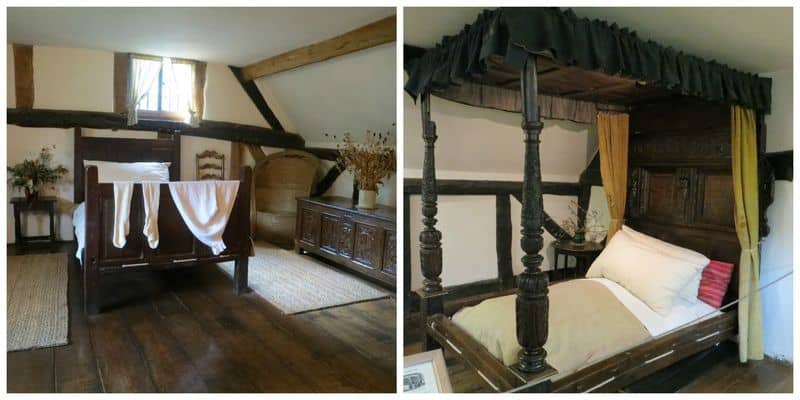 We had a lovely day in Stratford-upon-Avon although there simply wasn’t enough time to really do the town justice. Ideally, I would like to spend a couple of days to linger over the exhibits at the Shakespeare Houses, enjoy the gardens, walk along the river, and attend a performance of the Royal Shakespeare Company.

I was pleased that we chose to tour with London Taxi Tour with the limited time that we had available though. Having private transportation and a driver who knew where he was going meant that we were able to see the houses in an efficient manner and that meant that the kids were content as we toured the historical homes. 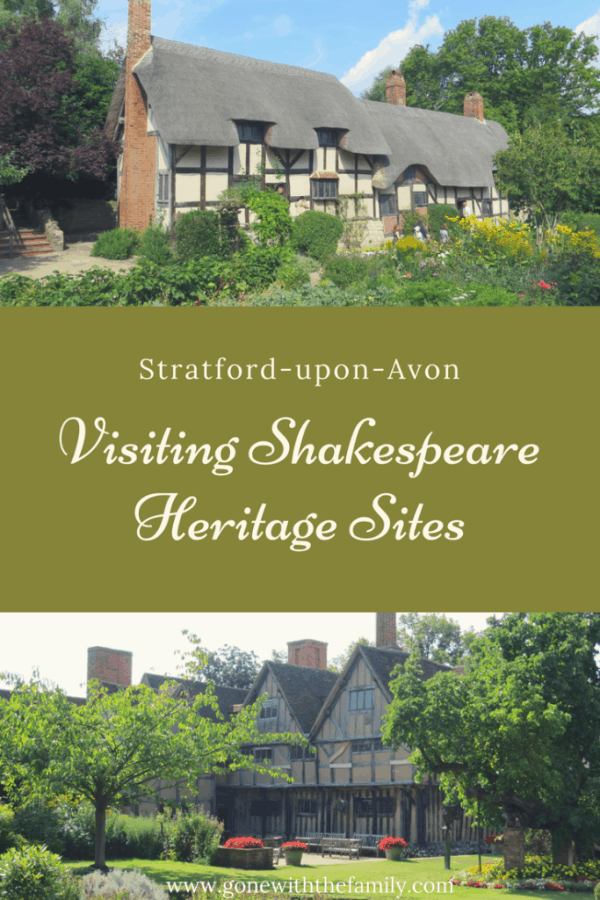