Highlights of a day spent in Athens, Greece while on a family cruise in the Mediterranean aboard the Celebrity Equinox.

This past summer our family cruised the Eastern Mediterranean with Celebrity Cruises. We departed from Civitavecchia, Italy on the Celebrity Equinox and one of our most anticipated ports of call was Athens, Greece.  Athens, which is the capital city of Greece and one of the oldest cities in the world, is often referred to as the cradle of Western civilization due to the wide-ranging impact that the political and cultural achievements of the city-state had on the rest of the world for many centuries. As a former political science major, I could not wait to finally see the city where democracy was born.

The ship actually docks in Piraeus which is 11km from the city centre of Athens.  After much consideration during the planning stages for this trip, we decided to hire a driver through Private Greece Tours to pick us up at the port and transport us into the city and between the various sites that we wanted to see.  In Greece, a driver/guide is distinct from a licensed guide.  Only a licensed guide is allowed to accompany clients into historic sites whereas a driver/guide can provide information about the city and the sites but is not qualified to impart historical facts.

We decided that we needed reliable transportation to and from the cruise terminal, particularly in light of the strikes that had been occurring off and on for some time in Greece.  We would also benefit from having an air-conditioned vehicle to cool off in between sites which would mean less grumbling from overheated kids.  Having a driver would also mean that we could cover more ground in our short time in Athens instead of limiting ourselves to the Acropolis and Plaka area.

We disembarked from the ship bright and early (or at least for us) at 8am and our driver, Spyros, was waiting for us outside the terminal.

Our first stop was the Acropolis which is inevitably the busiest spot in Athens. Particularly in the summer time, it would not be advisable to head anywhere else first as the day will only get hotter and the site more crowded as the busloads of tourists start to roll in.  When we arrived at the Acropolis the crowds were relatively thin but during the time that we spent exploring the site the crowd intensified and it became impossible to take a photo without others in it and there was a lot of jostling as the tour groups followed their guides en masse.

That first glimpse of the Parthenon serves as an exquisite reminder of why tourists flock to Athens.  The walk up to the Acropolis is steep so comfortable walking shoes are recommended and definitely keep ahold of young children, or anyone with mobility issues for that matter, as there are no handrails or barriers to prevent a bad slip.  There are licensed guides offering their services around the entrance to the Acropolis but we opted to tour it on our own. 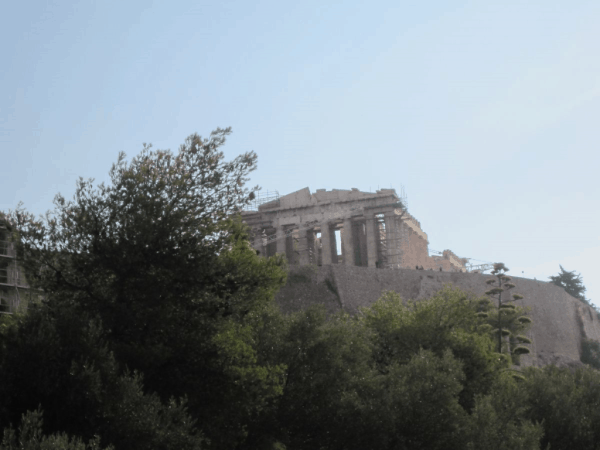 Our first view of The Parthenon Katie at the Acropolis

The first temple that we stopped to have a good look at was the Erechtheion which honours a legendary king.  The signature feature of this temple is the porch which appears to be supported by female figures (the “caryatids”) instead of columns.  The caryatids which visitors see today are exact replicas of the originals which are now housed in The New Acropolis Museum in order to protect them from the elements.  One of the original six figures was appropriated along with the Parthenon Marbles by Lord Elgin and can be viewed in The British Museum in London. Emma was most excited about seeing the Parthenon because it is the temple which was built to honour her favourite goddess, Athena.  According to Greek mythology, Athena became the patron goddess of Athens after a competition with Poseidon.  Poseidon offered city residents the gift of salt water, whereas Athena offered them an olive tree.  They chose Athena’s gift and the city was named Athens in honour of her.  The Parthenon, which is the most important surviving building from Classical Greece, was built to honour Athena.  Restoration and preservation of the Parthenon is still ongoing which means there is a great deal of scaffolding still present around some sides of the temple, however, this doesn’t detract from the awesomeness of gazing upon this ancient wonder. 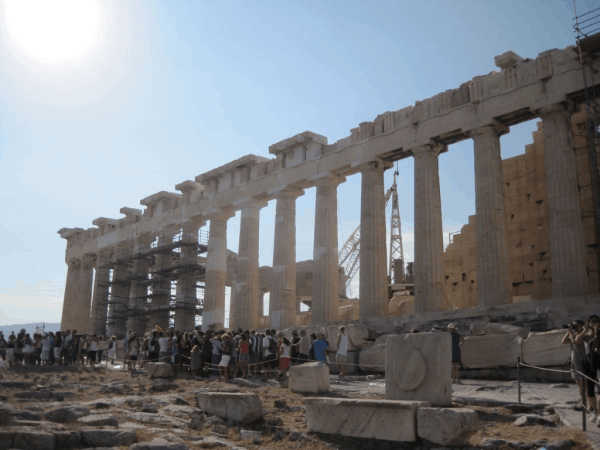 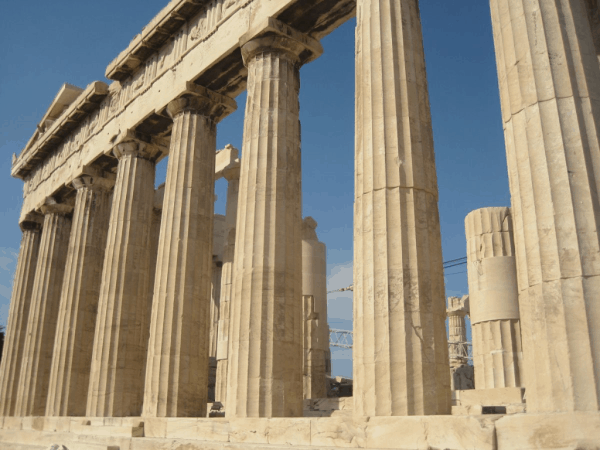 The area around the Parthenon was very crowded, however, in between waves of tour groups we did manage to have someone take a family photo for us. 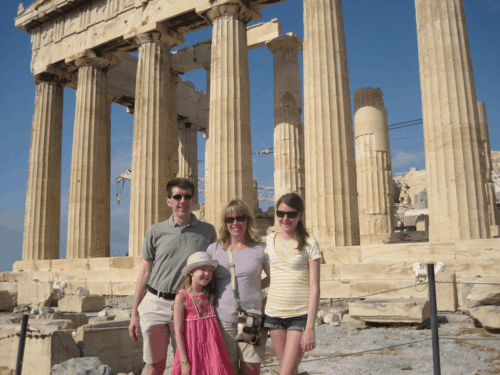 Family pic at the Parthenon

The Theatre of Dionysus

Afterleaving the Acropolis we decided to stop at the Theatre of Dionysus.  Emma and I had read the first book in the Percy Jackson and the Olympians series before we left home and she had become a big fan of Greek mythology as a result.  Dionysus, the god of wine, was one of her favourite characters in the book so when Spyros suggested that we stop at the theatre Emma jumped at the opportunity.  The Theatre of Dionysus is considered to be the place where European theatre began.  It doesn’t take much time to see what remains of the theatre, however, Emma was absolutely thrilled to have been there. Emma at the Theatre of Dionysus

The Temple of Olympian Zeus

Our next stop was the Temple of Olympian Zeus which Emma was also quite keen to see since Zeus was the top god.  (As a side note, as we made our way across Italy, Greece, and Turkey I was quite thankful to Rick Riordan for writing about Percy Jackson and igniting a passion for Greek mythology in my 8 year old daughter.)  There are only a few columns left of the Temple of Olympian Zeus but it doesn’t take much imagination to see that it had been a huge temple in it’s glory days. The Temple of Olympian Zeus Emma at the Temple of Olympian Zeus

About this time we had to make a shopping pit stop as Emma desperately wanted to buy figurines of Athena and Poseidon as souvenirs.  It seemed best to get the shopping over with quickly so that she could stop worrying about whether we were going to leave Athens without her having made her purchases.  Spyros took us to a very nice shop and Emma found exactly what she was looking for.

From there we headed to the Olympic Stadium which was the site of the first modern Olympics held in 1896.  Not much to do there other than snap some photos – but now we can say that we have been to the site. The Changing of the Guard

Every hour on the hour, the Evzones who guard the Parliament building in Syntagma Square conduct a changing of the guard ceremony.  This is an event that is very popular with tourists and can be very crowded.  Our driver opted to take us to the back of the Parliament building (the Old Palace) to see the Changing of the Guard as it was much easier to pull up there at the last minute and find a viewing spot.  It probably wasn’t as grand as the ceremony in the Square, however, it was still quite interesting to watch the Evzones in their traditional uniforms and it was a much smaller time committment as we arrived just a few moments prior to its start. Changing of the Guard

The next stop on our itinerary was Lycabettus Hill for a panoramic view of Athens including the Acropolis. Spyros was able to drive us part of the way up, however, there was still quite a bit of complaining about the amount of walking that we had to do to get to the top.  There are at least two family members who might disagree, however, in my opinion, the view of Athens from the top of this hill was worth every step of the strenuous walk on the zigzagging stairs to the top.  At 277m (about 1000ft), Lycabettus Hill is the highest elevation in Athens and affords quite impressive views.  After returning home I discovered that there is apparently a funicular that transports visitors to the top of the hill – now that is information that will definitely be withheld from my kids or I will never hear the end of it. Next up was the Ancient Agora which is located on the boundaries of the Plaka area.  By this time everyone was getting quite hot and tired so the first priority was to stop   for some ice cream.  Enthusiasm for ancient ruins was starting to flag at this point so we had only the briefest of looks around part of the Agora and then went for a short walk around the shops and restaurants that were nearby. 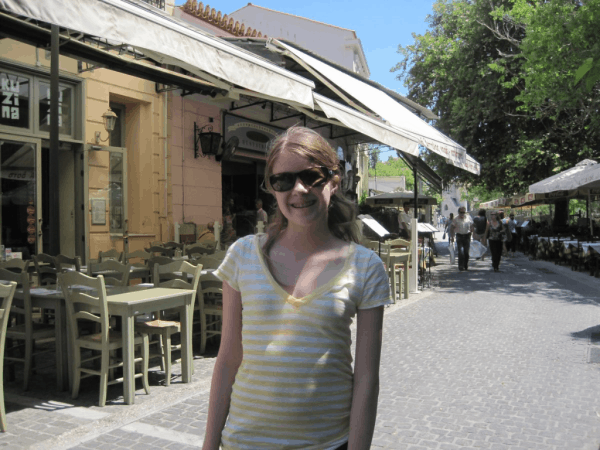 Katie in the Plaka neighbourhood 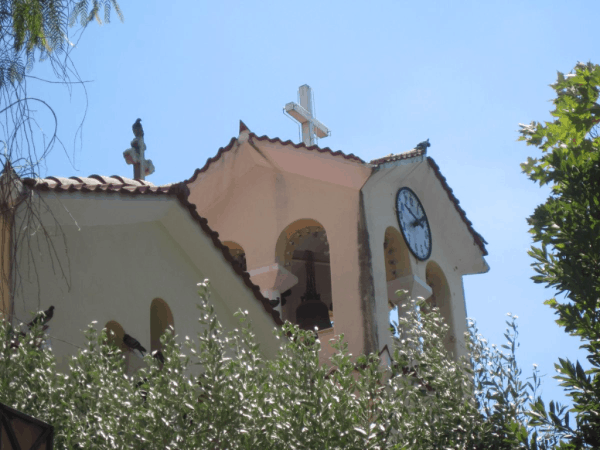 Near the ancient Agora 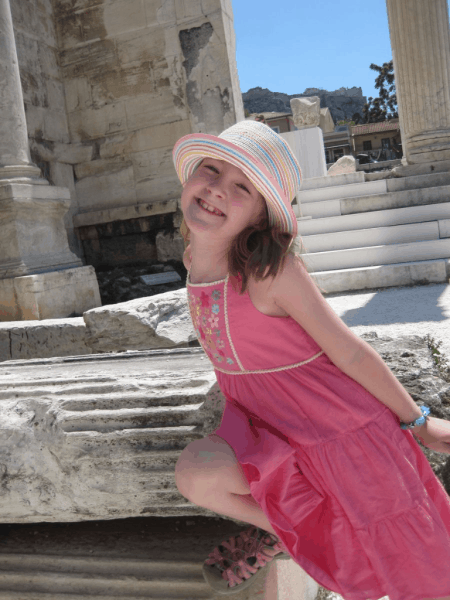 Emma near The Agora 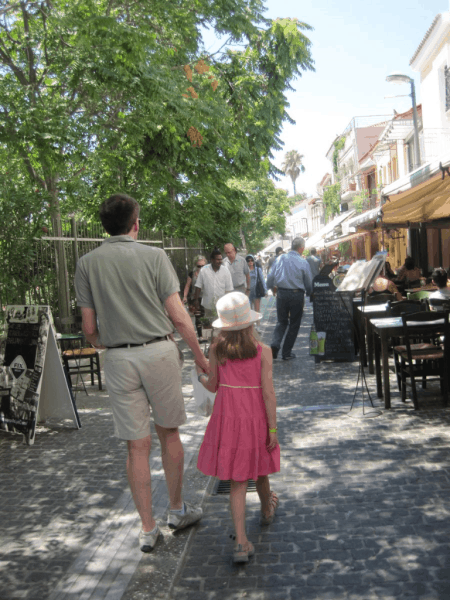 Walking in The Plaka neighbourhood

At this point we decided that everyone was getting too tired to continue and opted to return to the ship an hour early rather than visit either The National Archaelogical Museum or The New Acropolis Museum.  I would have loved the opportunity to see either of these museums, however, I believe that it’s very important when traveling with kids to know when to call it a day.  It’s far better to stop when everyone still has a favourable impression of a city than it is to check everything off a list but have grumpy kids whose overriding memory is how bad they felt at the end of the day. 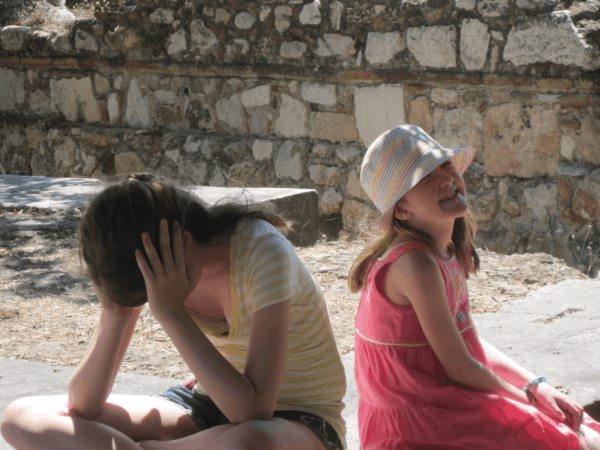 Overall, we had a very good day in Athens despite the heat and the fact that we were trying to cover a lot of ground in 7 or 8 hours.  Our driver, Spyros, did an excellent job of moving us around efficiently and there is little doubt that we would have seen far less of Athens without him.  Choosing Private Greece Tours for our day in Athens was definitely the right choice to have made with the limited time that we had available in the city.