A teenager’s view of the Wizarding World of Harry Potter

This is a guest post by my 14 year old daughter, Katie, who went on a father/daughter trip to Universal Studio’s The Wizarding World of Harry Potter last Labour Day weekend. 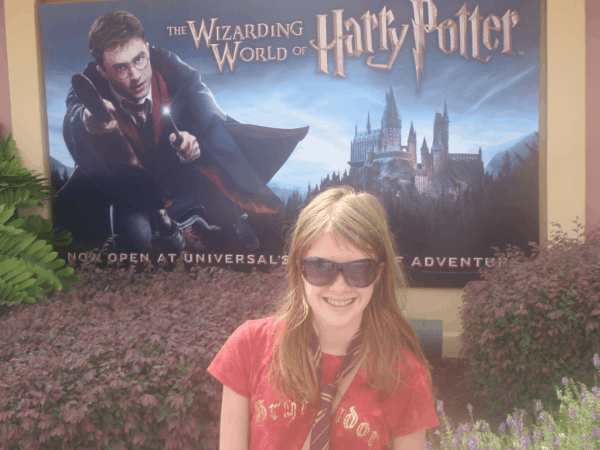 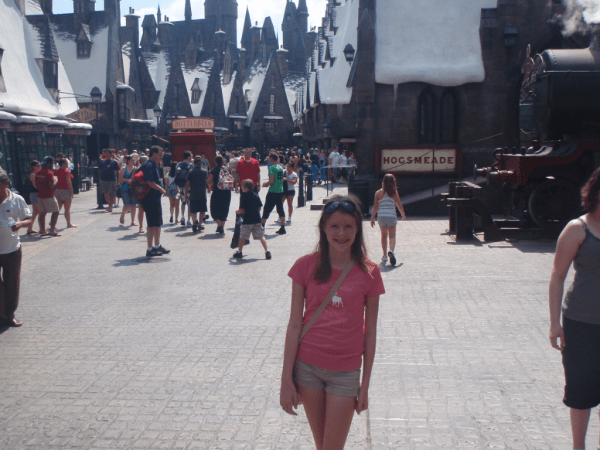 On the streets of Hogsmeade Katie with Hogwarts in the background

Flight of the Hippogriff

There are three rides in the park.  The ‘family ride’, Flight of the Hippogriff, is fun but very short.  The ride is very similar to most other kiddy rollercoasters you find in theme parks, however, it is still magical.  While walking through the line you pass Hagrid’s hut and hear a voice-over of actor Robbie Coltrane (who plays Rubeus Hagrid in the Harry Potter films) instructing you how to ride Buckbeak the Hippogriff.  Once you reach the front of the line, the staff members (all of whom speak in British accents) allow you onto the hippogriff and send you off onto a ride that lasts for about a minute.

The Dragon Challenge is the big rollercoaster of the park.  I am not a fan of rollercoasters so I didn’t actually go on this ride but I could see that it is not a calm ride at all.  There are two dragons that you are seated in that leave at the same time.  At various points in the ride while you are in the middle of a loop, passengers will come face-to-face with those in the other dragon.  Although I did not go on the ride, the staff members allowed me to walk through the line-up so that I could see all the cool props set up.  Even if you don’t want to go on the ride I would recommend going through the queue to see props, such as the Weasley’s Ford Anglia, from the films.

Of course, the main ride of the park is Harry Potter and the Forbidden Journey.  I guarantee you this is a ride you do not want to miss.  Although the wait times can appear excruciatingly long, the time passes quickly and they have several things to keep you entertained in the line.  Within the line, you will pass extremely life-like holograms of Harry, Ron, Hermione and Dumbledore speaking to you and hinting at what you  will experience on the ride.  When you reach the front of the line you are placed in what appears to be a trunk very similar to that of the Haunted Mansion ride in Disney World.  However, within a few seconds, you realize that this will not be nearly as calm as the Haunted Mansion.

As the ride begins, Hermione comes and throws a handful of floo powder at you and you are lifted up off of the ground.  The trunk is actually attached to a robotic arm that can spin you around in every which way.  The ride takes you through the Hogwarts’ grounds as you are chased by dragons, spiders and dementors. The visuals of the ride are truly amazing!  If the fact that I went on the ride 12 times in three days doesn’t prove how amazing it was then I don’t know what will!

Even if you aren’t the type of person who likes big rollercoasters I would honestly still consider going on this ride because if you don’t then you will regret it later.  If you are traveling with small children they have a ‘child swap’ area so that both parents are still able to ride.  If you decide not to go on the ride then I would still highly suggest that you go through the line up because you see so much just from walking through.  If you are tired of the hour long waits and don’t mind riding alone then I would suggest going through the line for single riders.  Keeping in mind that you don’t get to see all the cool stuff in the queue but it will take you directly to the front of the line and put you in a trunk with a group of three people you don’t know.

The rides aren’t the only great thing in the park.  Just outside of Hogwarts Castle is a stage sort of area where students and large ‘frogs’ sing the Macbeth-derived song from The Prisoner of Azkaban movie and actors dressed exactly as the Durmstrang and Beauxbatons students from The Goblet of Fire  perform acrobatics.  If you want to get pictures and be able to have a good view then I would recommend being there well before the show starts.  The shows only last for about 5 minutes but it gets very crowded in the general area at the time. 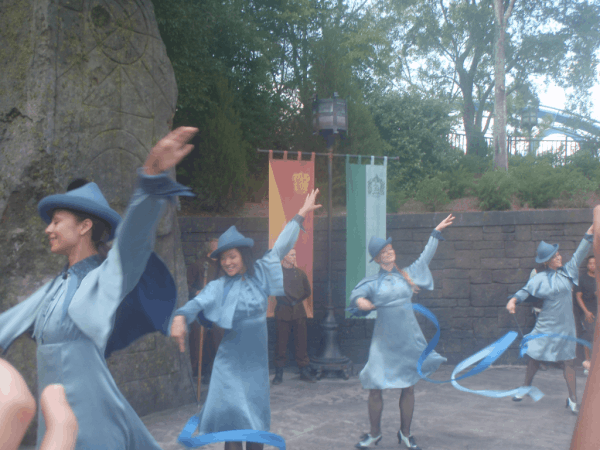 The event that everyone seems to really want to attend is the Ollivander’s wand ceremony.  Although the effect is neat and extremely realistic it is not all it is made out to be.  The line-ups can be terribly long and in the heat it can seem unbearable as you wait outdoors.  You are sent into the store in groups of about twenty people and out of those twenty people one person (usually a small child) is selected to have a wand chosen for them.  The magical effects are really cool but if you are over the age of 12 then I wouldn’t get your hopes up on having a wand ‘choose’ you.  You can, of course, still purchase a wand from a selection of different ones at the store.  I watched the ceremony, however, I did not purchase a wand at Ollivander’s as I had already bought one earlier in the year at Hamley’s in London, England. 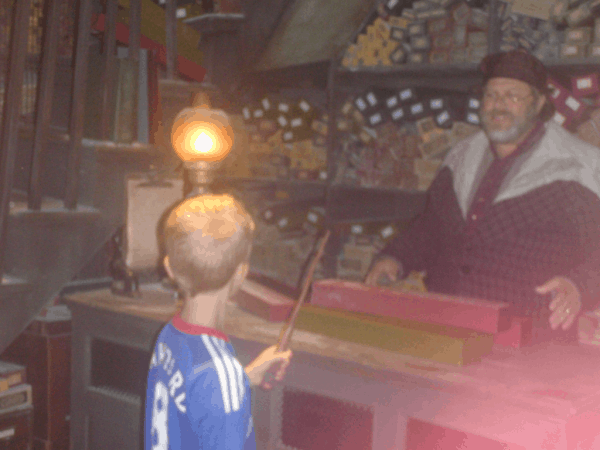 The merchandise in the park is amazing and, of course, pricey.  Items for sale there include quaffles and bludgers, chocolate frogs, remembralls, sneakoscopes and shirts with all sorts of designs – just to name a few things.   I made a number of purchases while we were in the park including t-shirts, a Gryffindor tie and banner, a Pygmy Puff and lots of chocolate.

Honeydukes Sweetshop is filled with tasty sweets including Chocolate Frogs and Bertie Botts Every Flavour Beans.  My personal favourite was the Chocolate Cauldrons.  They are very rich so, although they may look small, I can almost guarantee you won’t be able to stomach more than one at a time. 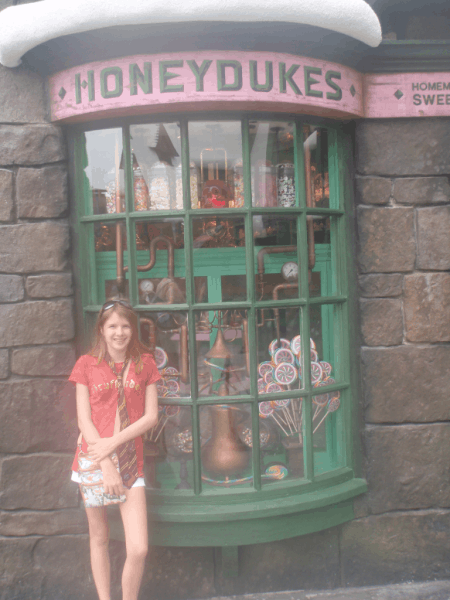 The Three Broomsticks is the restaurant in the park.  It is fast, efficient and the food is very good, especially for it being amusement park food.  The menu is all British foods such as Cornish Pasties and Fish and Chips.  The drink that is getting everyone excited is the park’s signature Butterbeer which is a recipe that was approved by J.K. Rowling herself.  Although the drink wasn’t something that I enjoyed, many people seemed to love it and I recommend buying one even if it is just so you can say that you have had one. 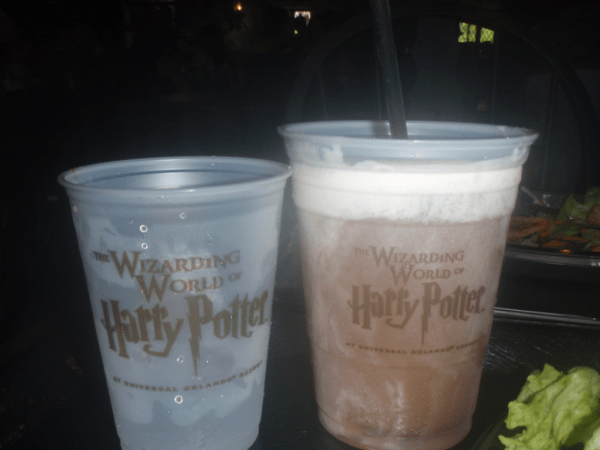 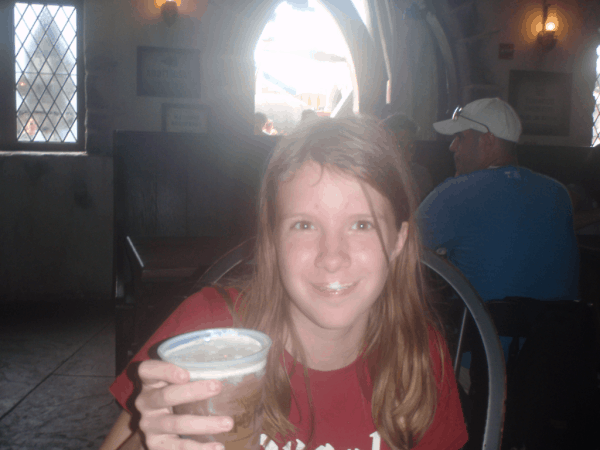 Dining at The Three Broomsticks

My Dad and I stayed at the Loews Portofino Bay Hotel which is one of the three resorts located at Universal Studios.  My advice would be that visitors should stay in one of the Universal Studio’s hotels if they can.  This gives you the benefit of being permitted in the park an hour before the general public.  Due to the insane masses of people visiting the park, this hour gives you the opportunity to roam around without bumping into people, zip through ride lines and quickly get into Ollivander’s Wand Shop.  If you aren’t staying at the park, then you must still try to get there as early as possible.  Visitors should also make sure to go back at night because Hogwarts is beautiful when lit up.

I would recommend the park for ages 8 and up, however, I did notice a number of younger children there as well.  Some were going on the rides, however, I did see one young girl who was very frightened even while in the lineup and park staff had to suggest to her parents that she shouldn’t be taken on the ride.  I think that parents need to carefully consider whether it is appropriate to take small children on an intense ride like Forbidden Journey.  Overall, my trip to The Wizarding World of Harry Potter was one of the best trips that I have ever been on and I would highly recommend it to any Harry Potter fan.  I would most definitely go back to the park anytime that my Mom or Dad are willing to take me.  The Wizarding World of Harry Potter is a truly magical experience that you don’t want to miss. A Day at The Wizarding World of Harry Potter