Our family’s day enjoying The Wizarding World of Harry Potter in Orlando, Florida.

Our family’s obsession with Harry Potter goes back a lot of years. I think Katie was about 6 years old when I first read Harry Potter and the Philosopher’s Stone to her, carefully editing as I read to take out any bits that I thought might be too scary. As each new book was released we would buy it straightaway and I would read it aloud to her even though she was, by then, quite capable of reading it herself.  After reading the book together she would then immediately re-read it herself multiple times.

The theatre release of each movie was eagerly anticipated and then watched countless times on DVD. Rarely a day would go by in our home without some discussion about Harry Potter and his friends.

You can imagine the excitement when Katie first learned that a Harry Potter theme park would be opening at Universal Studios in Orlando so a few days before she started grade 9 my husband flew down with her for a special father/daughter weekend at the Wizarding World of Harry Potter (WWOHP). She had been itching to go back ever since so she was ecstatic when she and Emma opened their present this past Christmas morning and discovered that it was a trip to Orlando for six nights. Now Emma and I would discover whether WWOHP was as amazing as Katie had described it to be.

We decided that we would spend New Year’s Eve day at Universal Studios and planned to wake early so that we would arrive at the park prior to opening.  Miraculously, we managed to get up and moving and were there ahead of schedule. As soon as the gates were opened we headed directly for The Wizarding World of Harry Potter with a large crowd of like-minded people. Emma and I had been instructed that we were not to stop to look at anything or take photos (particularly in Seuss Landing) but head directly to The Forbidden Journey ride before the lines became unbearably long. As hard as it was, we did as we were told.

WWOHP does not disappoint – from that first glimpse of Hogsmeade to the spectacular replica of Hogwarts, guests feel like they have been transported into the world that J.K. Rowling imagined. The grey buildings with snow-covered rooftops and crooked chimneys were begging to be photographed but I kept walking knowing that I would have lots of time over the course of the day to snap pictures. 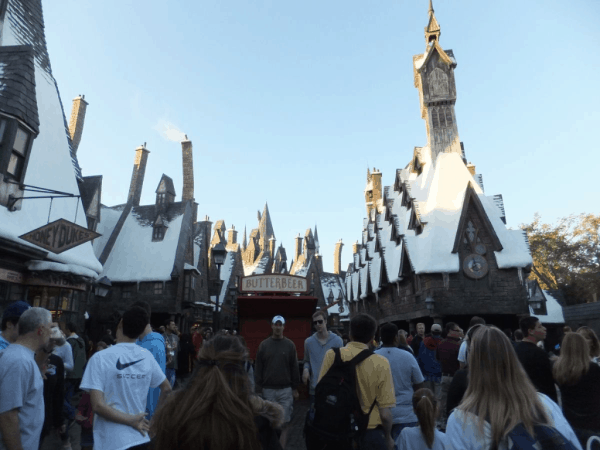 Harry Potter and the Forbidden Journey

As soon as she had learned about this trip, Katie started hounding me about riding Harry Potter and the Forbidden Journey with her.  I don’t like rides, however, I was pressured into agreeing to try this one. I hadn’t intended to let Emma ride but she insisted that she wanted to. I caved and our family lined up for the ride with me second-guessing myself the entire 30 minutes or so that we were in line.

The queuing area for Forbidden Journey has incredible details. Apparently people walk through the line-up with no intention of riding just to have the opportunity to see the elaborate design. The line winds past the door of the Potions Classroom and into Professor Sprout’s Greenhouse, heads inside Hogwarts Castle, into Dumbledore’s office and through the Defence Against the Dark Arts classroom. Along the way riders see potted mandrakes, the Mirror of Erised, Dumbledore’s pensieve and talking pictures.

Holograms of Harry, Ron & Hermione establish the narrative for the ride urging everyone to meet them in the Room of Requirement in order to sneak down to a Quidditch match. From there riders enter the Gryffindor Common Room through the fat lady picture where the talking pictures inside the room as well as the Sorting Hat provide safety precautions for the ride. The incredible details such as the Daily Prophet newspaper and the moving paintings capture the attention of the riders as the line moves forward. Since we had arrived at Hogwarts a few minutes after opening, our line was actually moving quite quickly which meant that we didn’t have as much time to absorb the details – slower moving lines have the benefit of taking it all in. Before you know it, you are boarding the ride and there’s no turning back. 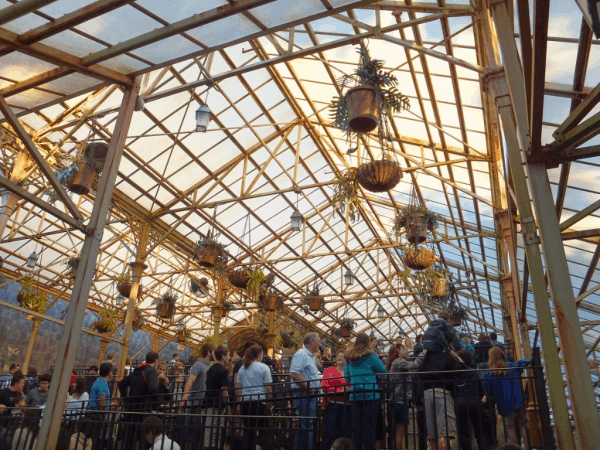 Queuing through the Greenhouse at Hogwarts 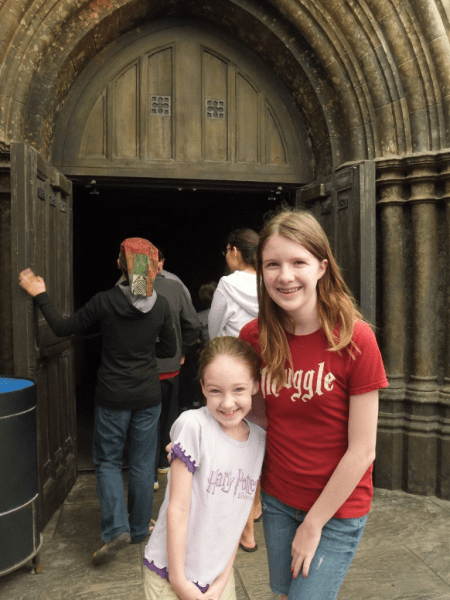 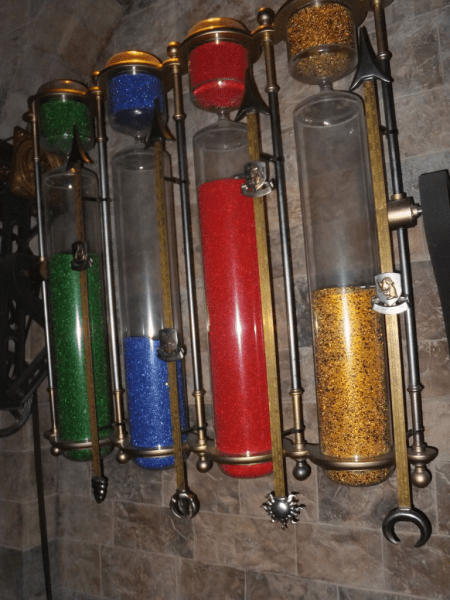 The Forbidden Journey ride itself is not a traditional rollercoaster but an intense multi-sensory experience. Passengers are strapped in groups of four onto an “enchanted bench” that is attached to a robotic arm which pivots to spin riders. You feel like you are flying on a broom along with Harry and as you swoop through the castle and over the grounds you meet up with Dementors, a fire-breathing dragon, spitting spiders and various characters from the story. It’s non-stop action and you are whipped around in every direction.

I couldn’t stand the motion and had to close my eyes a fair bit to ward off a spell of dizziness so I missed a fair bit of the plot. I wasn’t so much scared as just willing it to be over so that we could stop moving. Emma, on the other hand, was terrified by the experience although she recovered quickly enough once we were inside Filch’s Emporium of Confiscated Goods and she got a look at all the merchandise available for purchase – a stuffed version of Hermione’s cat Crookshanks was deemed adequate compensation for the terror she had endured.

Emma and I survived the ride – just barely – and once we had that over with then we were able to relax and enjoy the park safe in the knowledge that we never had to ride it again. Despite the crowds in the park that day, Katie and her Dad managed to ride Forbidden Journey 3 times which brought their grand total for two trips to 15 rides. (She can provide a second-by-second play by play of the ride but wasn’t inclined to tell me at which point a photo of riders is snapped – resulting in the most unattractive photo of me that has ever seen the light of day. I posted it on Facebook for anyone who wants to have a good laugh at my expense.)

Katie and my husband also rode The Flight of the Hippogriff, however, Emma and I had learned our lesson and were content to watch from the sidelines. 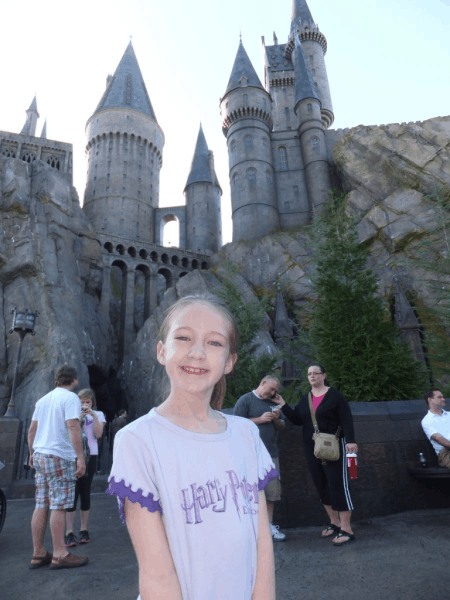 Walking around The Wizarding World of Harry Potter is entertaining even for visitors who don’t go on any of the rides. We stopped to watch performances by the Hogwarts’ choir with their singing frog and the Beauxbatons and Durmstrang students. 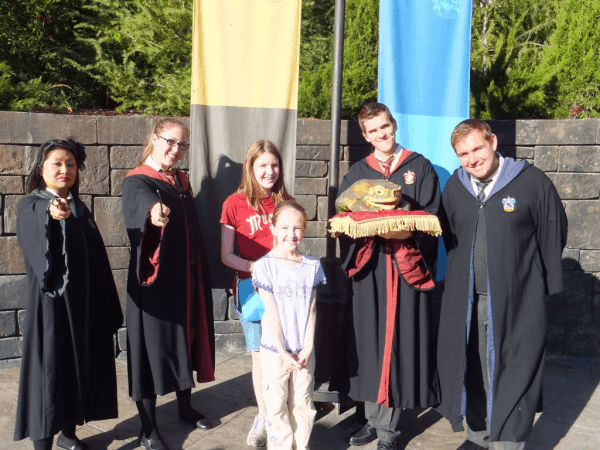 Katie and Emma with Hogwarts’ students 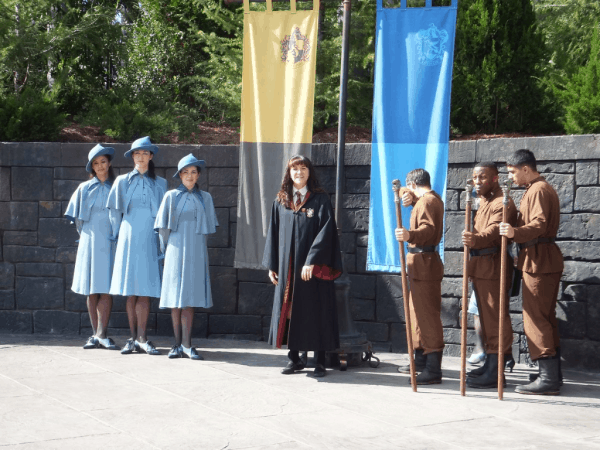 The Hogwarts Express engine is located just inside the entrance to WWOHP and photos with it are a highlight for most visitors. At certain times of the day the Conductor will be on hand and lucky guest can have their picture taken with him. Emma had a long chat with him while he showed her how his pocket watch worked. 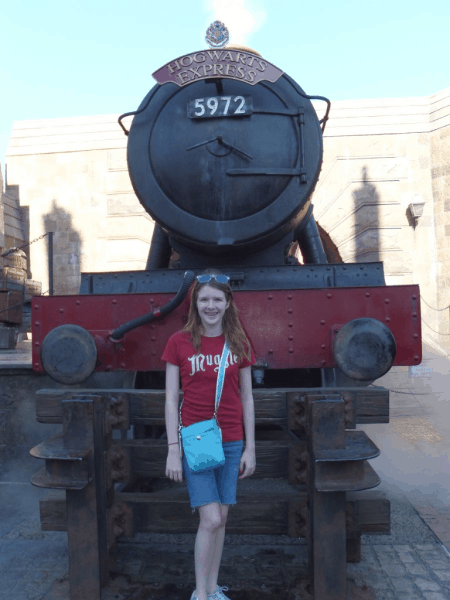 Katie in front of the Hogwarts Express 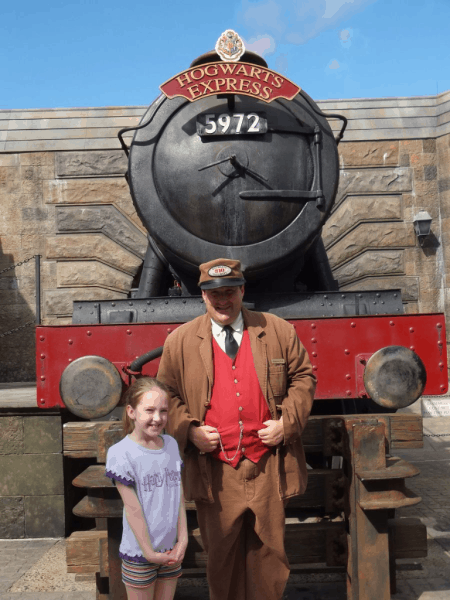 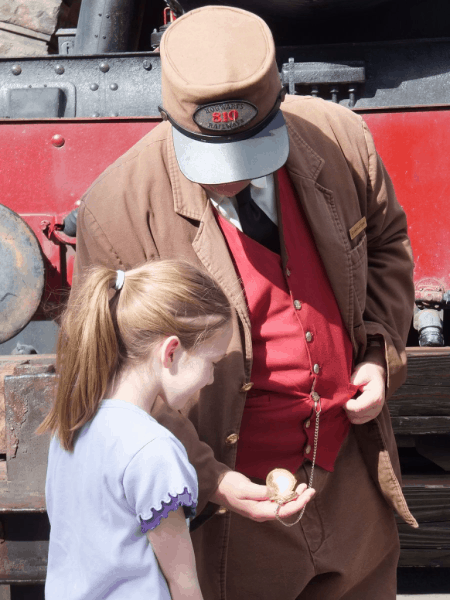 The Village of Hogsmeade

The village of Hogsmeade is exactly how I pictured it from reading the books apart from the fact that the shops from Diagon Alley are located here as well. Apparently there is an addition to WWOHP being built which will include Diagon Alley and Gringott’s Bank so I’m not certain if this will result in any changes in the current set up or not. Regardless the details of each shop and restaurant have been carefully thought out and are perfect. 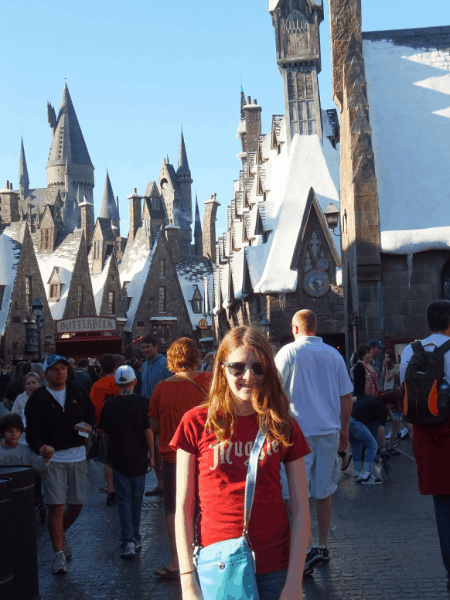 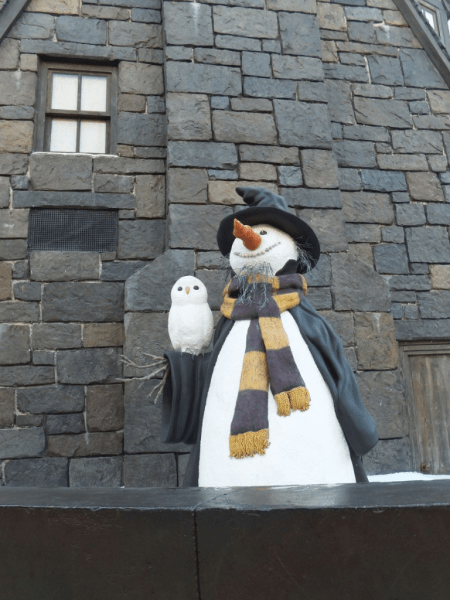 A snowman in Hogsmeade 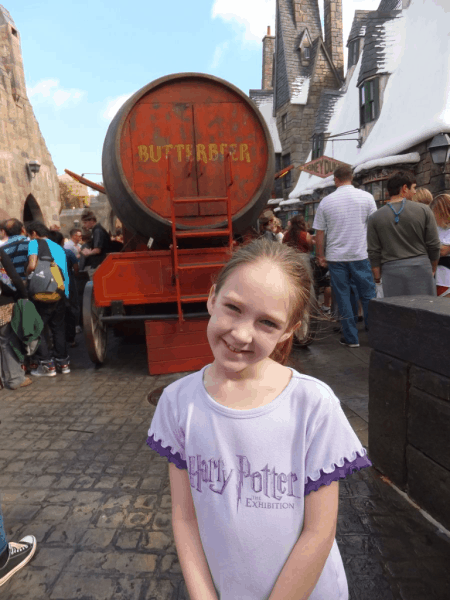 We ate lunch at The Three Broomsticks which is a cafeteria style eatery. Lunch consisted of fish and chips and Cornish Pastries which were surprisingly good for theme park fare. When in Hogsmeade, one must drink Butterbeer so Katie and I decided to partake – one regular and one frozen. I think it’s safe to say that Butterbeer is an acquired taste. A few sips are okay but it’s a very sweet drink. We don’t drink soft drinks though so we probably aren’t in the best position to judge the quality. Anyone who is of age and would like an alcoholic beverage can pop next door to the Hogshead Tavern for a fire whiskey. 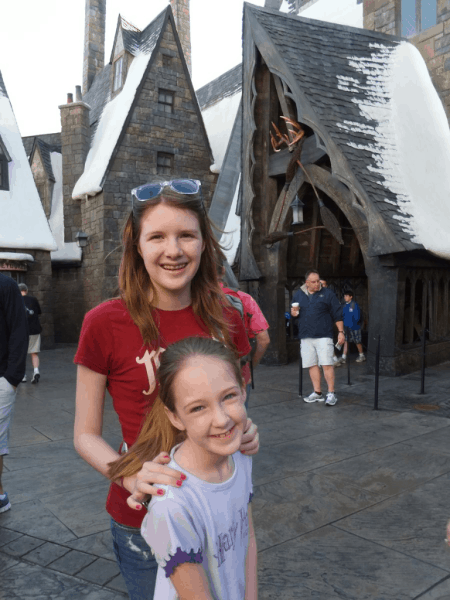 Outside The Three Broomsticks restaurant 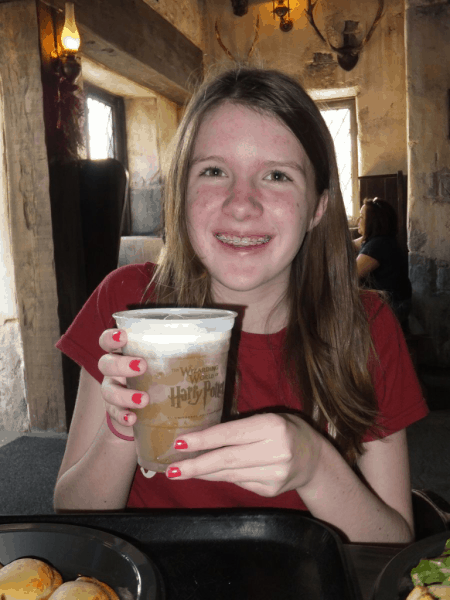 Katie and her butterbeer

The shops are excellent – fun to browse in even if you have no intention of purchasing any souvenirs! Filch’s Emporium of Confiscated Goods, Ollivanders Wand Shop, Dervish and Banges, Zonkos Jokes and Honeydukes Sweet Shop – we spent time in all of them. We even had to line up in order to be granted entrance to the crowded Dervish and Banges and it was absolutely worth the wait. 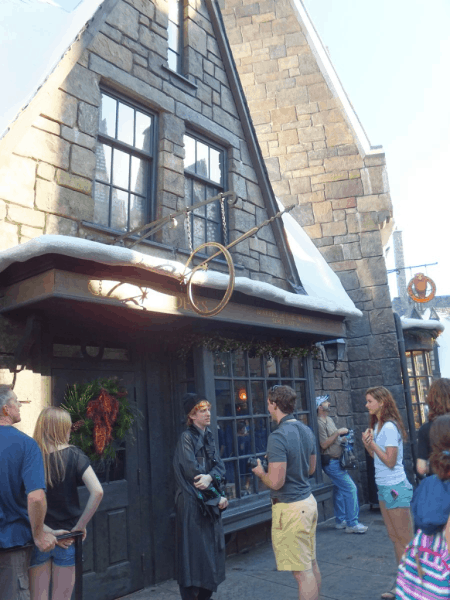 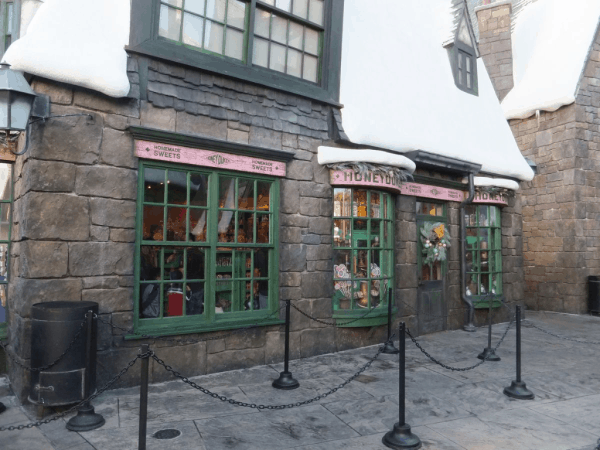 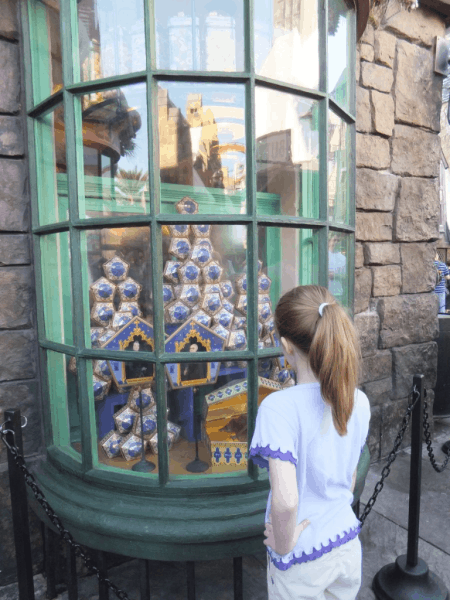 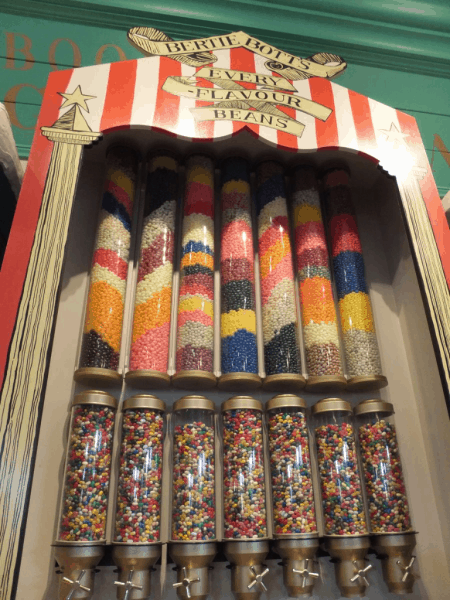 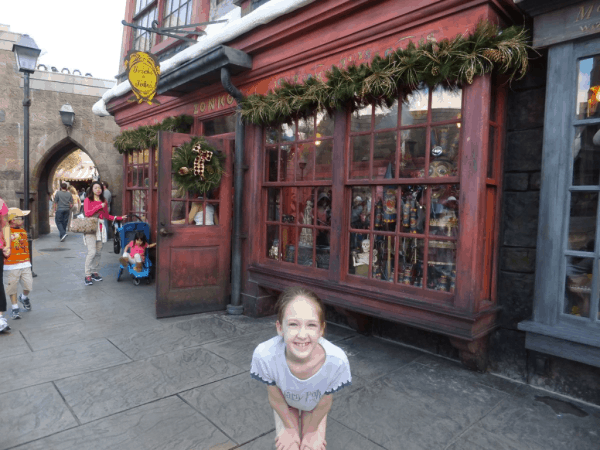 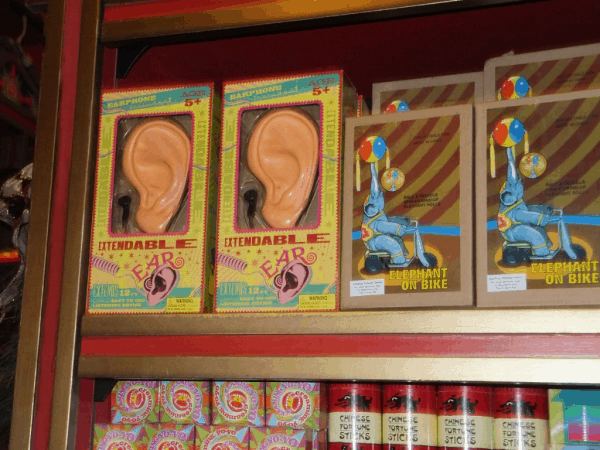 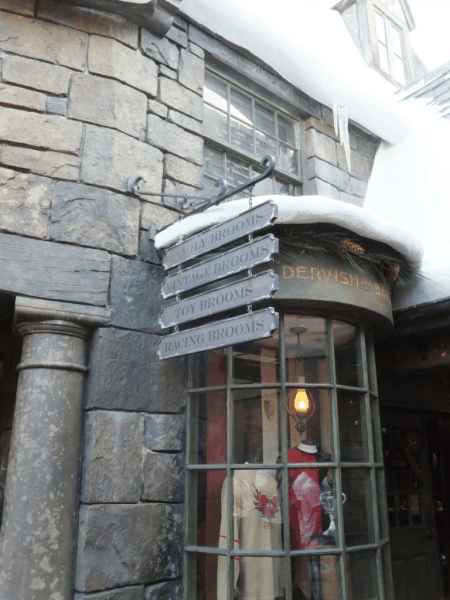 One of the special touches is that postcards purchased at Dervish and Banges can be specially stamped with a Hogsmeade Owl Post stamp before they are posted creating the perfect souvenir to send off to friends or family at home. 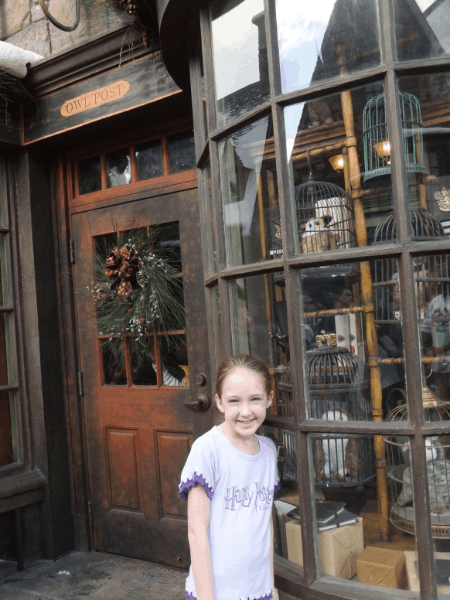 We loved the Wizarding World of Harry Potter – it is a definite must-see for die-hard Harry Potter fans and I would even recommend it for the casual fan.  Universal Studios has done an excellent job of bringing to life the world of J.K. Rowling’s imagination.  We are looking forward to a return visit after the expansion, however, I will be content to experience it without setting foot on any rides.

This article may contain affiliate links which help support this site at no additional cost to you. We are a participant in the Amazon Services LLC Associates Program, an affiliate advertising program designed to provide a means for us to earn fees by linking to Amazon.com and affiliated sites