Things to see and do on a one day visit to Geneva, Switzerland. A whirlwind day trip to Geneva from Paris left me longing to return to Switzerland as soon as possible.

While we were in Paris last spring break we managed to take several day trips out of the city and one of the most memorable was a day trip to Geneva to visit friends who had moved back there after living in Canada for several years. We only had a few hours for sightseeing but it was a wonderful introduction to this lovely city.

Travel from Paris to Geneva by Train

We booked tickets on the high-speed TGV Lyria train from Paris to Geneva departing from Gare de Lyon (in the 12e arrondissement) around 8am. We arrived at the train station far too early because we had anticipated that we might have difficulty finding the right platform or some other issue but it was as easy as could be. We boarded the train for the journey that took just over 3 hours and arrived later in the morning at the Cornavin station in Geneva where we were met by our friends.

I believe that I fell in love with this picturesque city within moments of our arrival. Geneva is the second-largest city in Switzerland and would have to be considered one of the loveliest with its beautiful location on the shores of Lake Geneva and view of both the Jura Mountains and the French Alps. Ideally we would have liked to have more time to spend but one day in Geneva was certainly better than none! This is what we were able to see and do in our one day itinerary for Geneva. 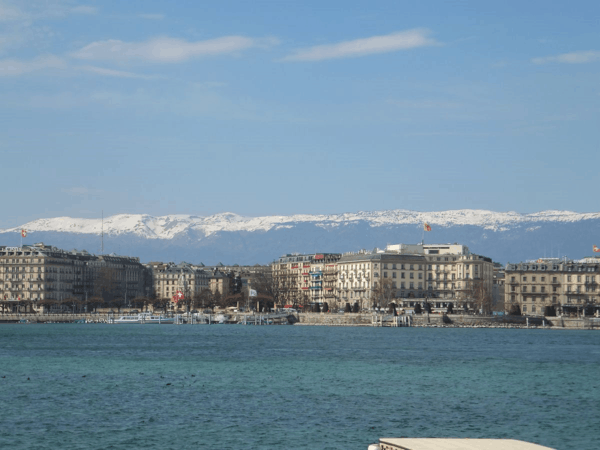 The waterfront in Geneva

The seven of us piled into our friend’s vehicle for a short sightseeing drive around the city. We passed by the United Nations European Headquarters at the Palais de Nations and saw The Broken Chair which is a poignant memorial to victims of landmines and cluster bombs. 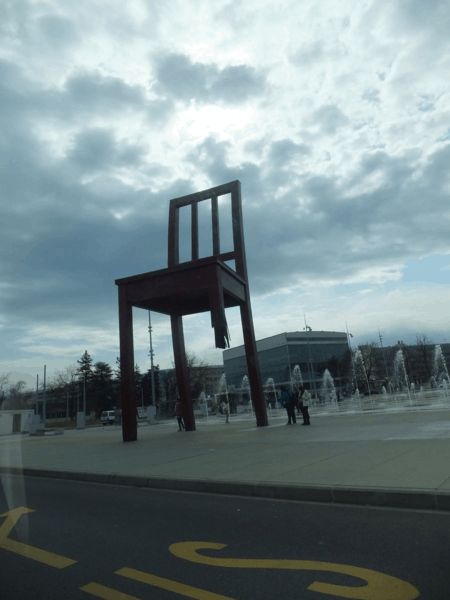 The Broken Chair outside UN Headquarters in Geneva

After parking the car, we strolled past the Horloge Fleurie (“Floral Clock”) and paused for photographs. The Floral Clock, located at the edge of the Jardin Anglais (“English Garden”), is a symbol of the Swiss watch industry and has been in place since 1955. The clock functions as an actual timepiece (it keeps precise time transmitted via satellite) and the second hand (2.5m long) is the largest in the world. The clock contains more than 6,000 flowers and plants which vary by season. 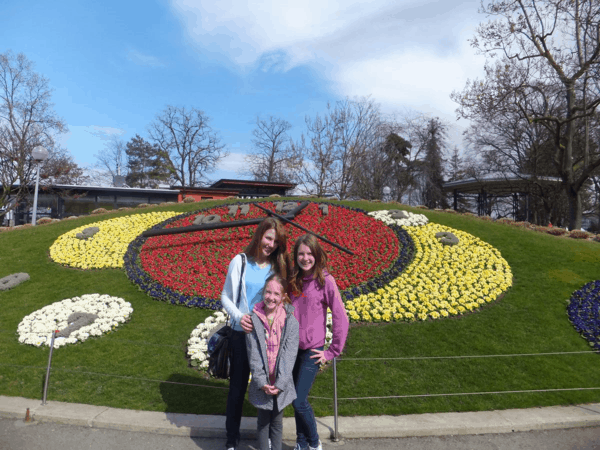 Posing by the Floral Clock in Geneva

From there we walked along the lakefront promenade to see Le Jet d’Eau (“the Fountain”). This fountain which is situated near the left bank of Lake Geneva is one of the largest fountains in the world and one of the most popular tourist attractions in the city. The fountain sprays water into the air at a rate of 200km/hr and if the wind changes direction suddenly then you might very well get wetter than you had intended. We had a lot of fun taking trick photos here and Emma did the best job by far. 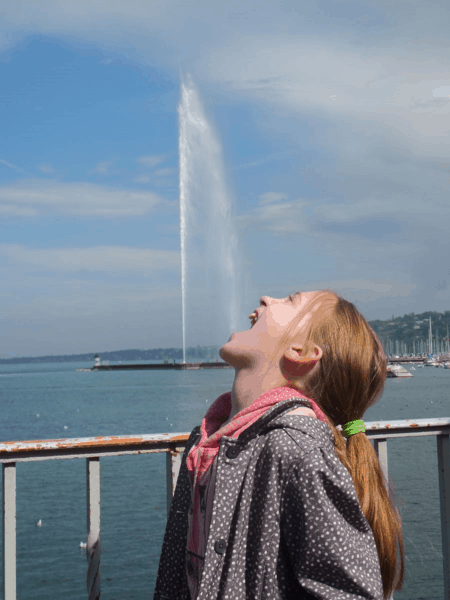 Emma and the Jet d’Eau

Of course, we didn’t get far before needing a gelato break at what is reputedly the best gelato shop in Geneva. 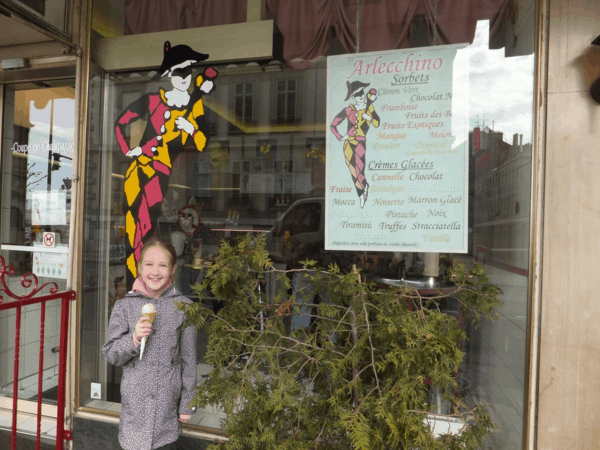 Re-energized by the gelato we commenced our a walking tour of the cobblestoned streets of Geneva’s Vieille-Ville (“Old Town”), pausing for some window shopping before getting down to the serious business of sightseeing. Like most European cities, Geneva’s city centre is compact and is best seen on foot. 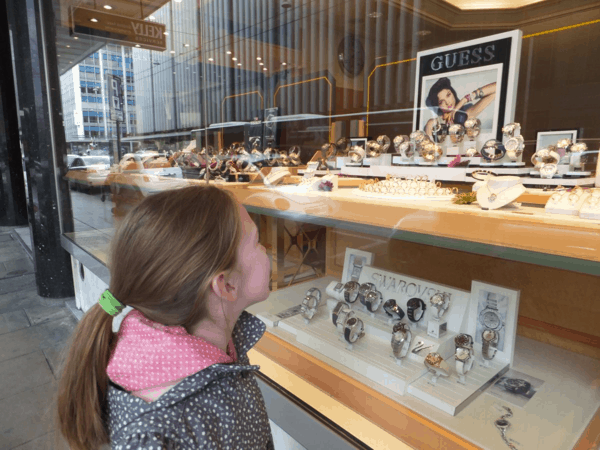 We paused to admire the golden dove in the courtyard of Maison Mallet which houses the Musée Internationale de la Réforme (the “International Museum of the Reformation”). 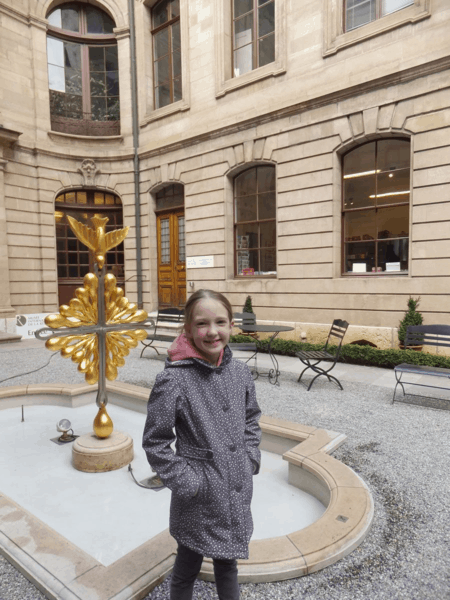 Lunch was enjoyed at Hôtel Les Armures, a luxury hotel situated in a 17th century residence. The restaurant is one of the oldest in the city and serves up delicious Swiss specialties such as raclette and fondue. 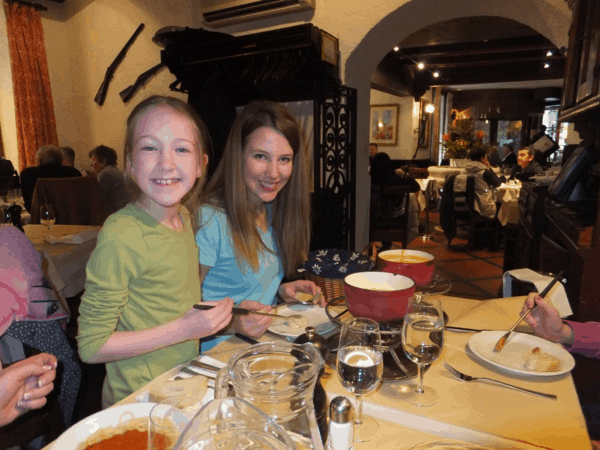 Continuing our walk through the Old Town, our next stop was the Old Arsenal which is another popular attraction in the city. This former battery is located across the street from the 15th century Hotel de Ville which still serves as Geneva’s city hall. There are five cannons on display here as well as mosaic frescoes by Alexandre Cingria depicting various periods in the history of Geneva.

Emma at the Old Arsenal in Geneva

Nearby is St-Pierre Cathedral which towers over Geneva’s historic area. Construction on the present building commenced in 1160, however, there is archaeological evidence that the site was occupied as early as the 4th century as a Christian sanctuary. From the outside the church is quite interesting for the variety of architectural styles it features but is best known for reformer John Calvin’s sermons which took place here in mid-16th century and Calvin’s Chair is on exhibit inside the building for visitors to see. 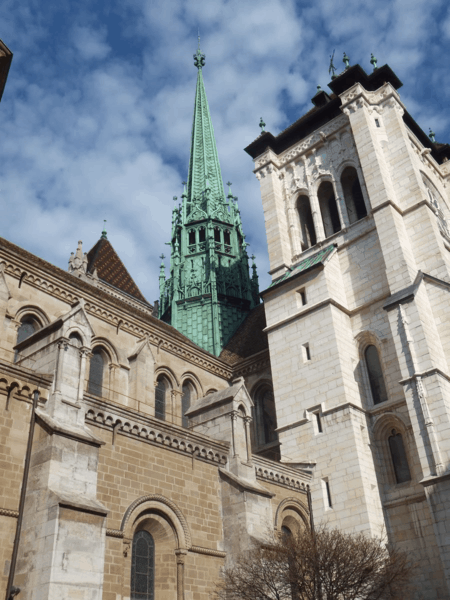 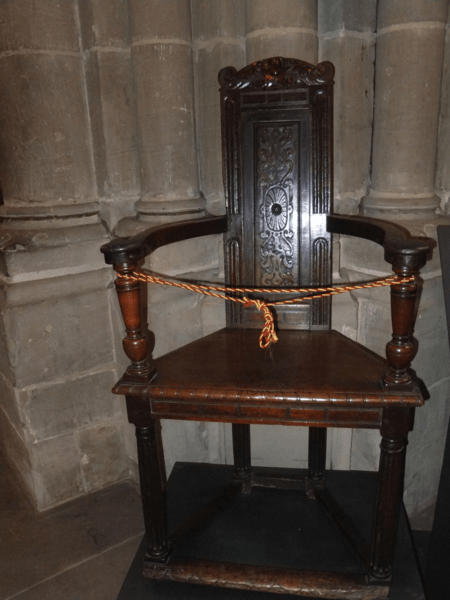 Our walking tour of the Old Town continued pas La Clémence which is an institution in Geneva. This is one of the city’s most popular bars especially during the warmer weather when patrons enjoy sitting out on the very large terrace. 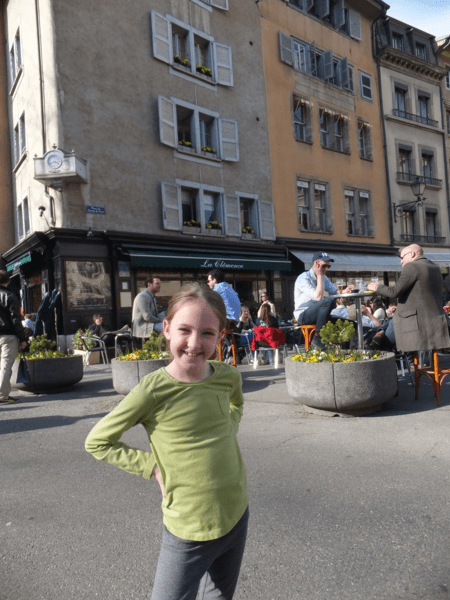 Bastions Park and the Reformation Wall

From there we headed to Bastions Park to view the Reformation Wall. The lovely tree-lined Bastions Park was a botanical garden at one time and is now a popular place for relaxation – or to play a game of chess on the life-size boards. The Reformation Wall was built into the wall of the Old Town as a tribute to the founders of the reformation movement – John Calvin, John Knox, Guillaume Farel, and Théodore de Bèze (the large statues in the centre of the wall). The monument was carved in the early 20th century and stretches for approximately 100m. The wall also depicts other figures from the European Protestant movement (smaller statues) as well as bas-reliefs of important moments in Protestant history. 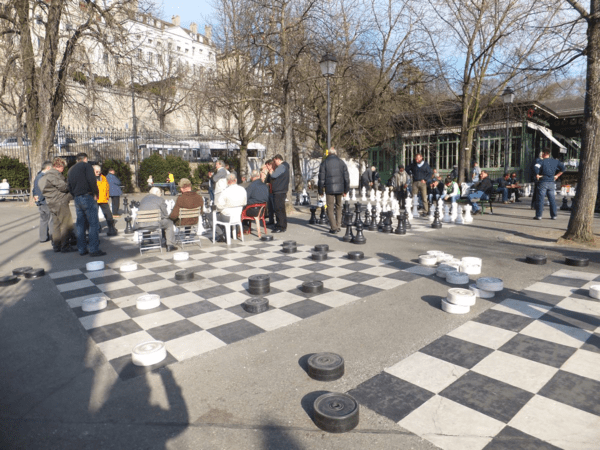 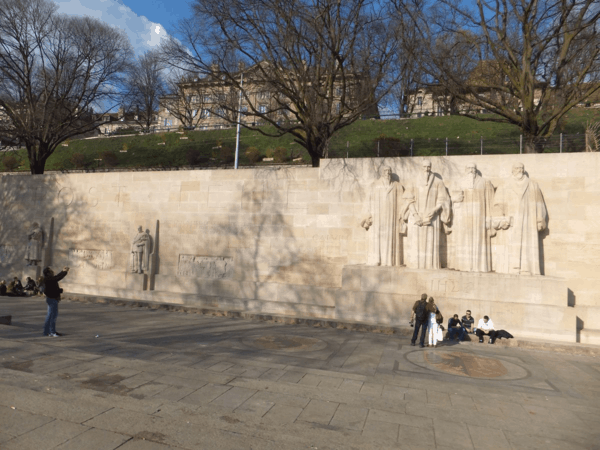 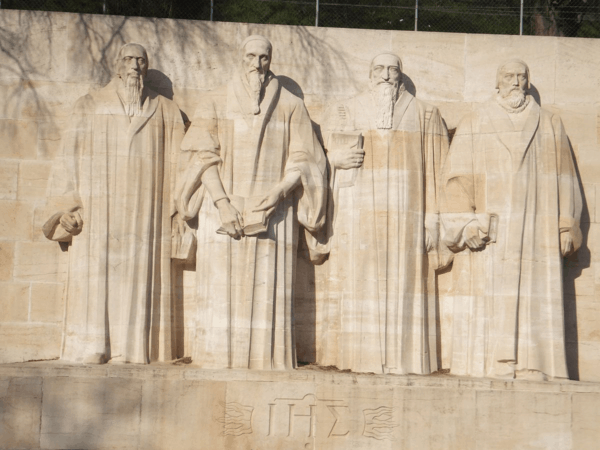 The Old Town of Geneva was once a walled city and the last remaining wall can be found on the south side where the Treille Promenade provides a view over the rest of the city. (The Treille Promenade also boasts what is said to be the longest wooden bench in the world. It was built in 1767 and measures more than 120 metres in length.) 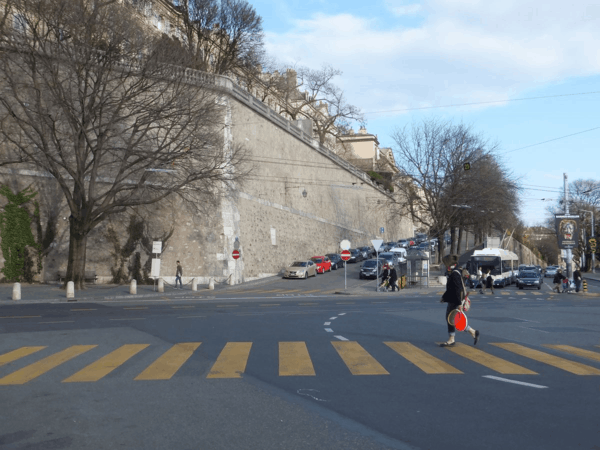 One of the more interesting streets that we saw was this one flying the flags of Switzerland and of the canton of Geneva from one end to the other. 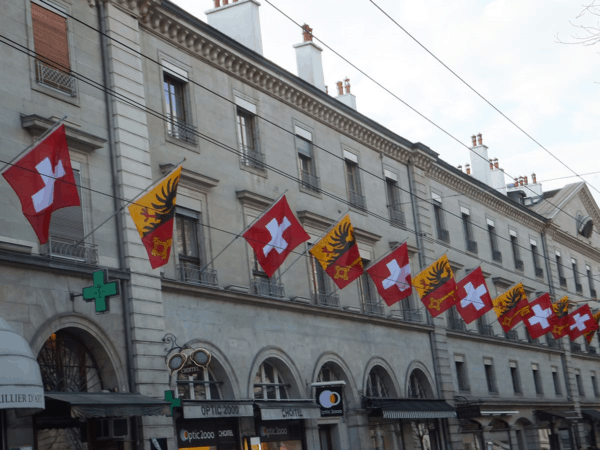 Street of flags in Geneva

The Tour de L’Île is now part of a private building but is notable as the tower is all that remains of a 13th century château that had been built on the southern side of the Rhône River to protect Geneva from an attack via the bridge. 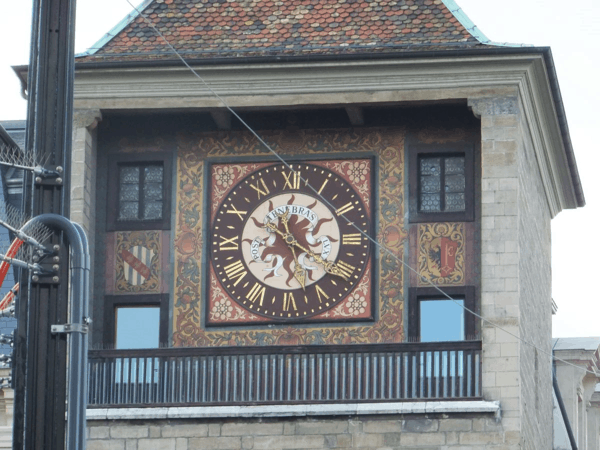 Of course, we could not leave Geneva without shopping for Swiss chocolate.

Check out that Toblerone bar – and only 99 Swiss Francs!!! 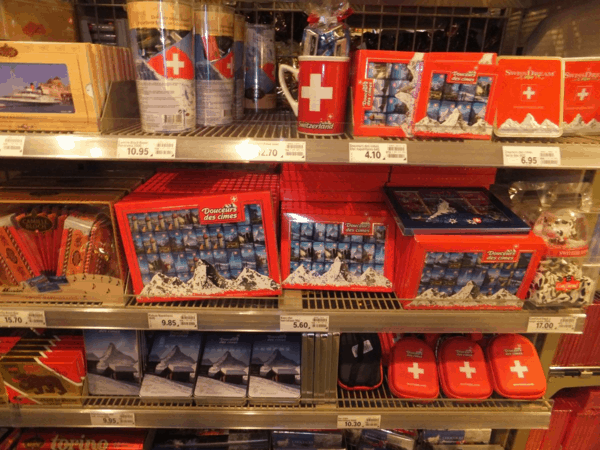 We finished our day in Geneva with a Swiss hot chocolate before catching the train back to Paris – hoping to return soon and spend more time exploring Geneva and the rest of Switzerland.