Photos from our visit to the south rim of the Grand Canyon.

We have just returned from a visit to Las Vegas that included a road trip to spend two nights at the Grand Canyon’s south rim. It was a highly-anticipated first-time visit and I will never forget the feelings evoked as I approached the canyon edge and caught that first glimpse of one of the world’s natural wonders.

Photos can’t begin to do justice to the breathtaking beauty and grandeur of the Grand Canyon but these are a few of my favourites from our two day stay.

Arriving at our hotel in Tusayan, Arizona toward the end of the day after a long drive from Las Vegas and a stop at the Hoover Dam, we paused only long enough to drop off our luggage before heading to the National Park to see the canyon for the first time. Fortunately, we made it just in time for sunset.

Upon arrival, we parked the car and headed to Mather Point which is quite close to the Grand Canyon Visitor’s Center. I was simply awestruck by my first view of the canyon. We have all seen images of the canyon in print and on screen but nothing can compare to the experience of seeing it in person. My 9 year-old daughter’s immediate reaction was “Wow! The Grand Canyon rocks!!” and that summed it up quite perfectly. The sun was starting to set when we arrived which made the lighting difficult for taking photos but just seeing the canyon at that time of the day was incredible. My first glimpse of the Grand Canyon 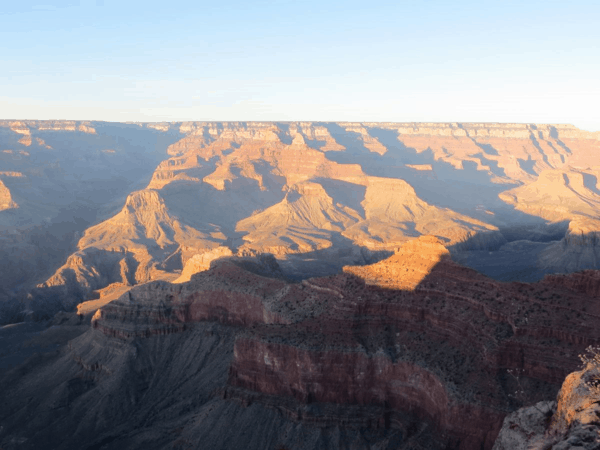 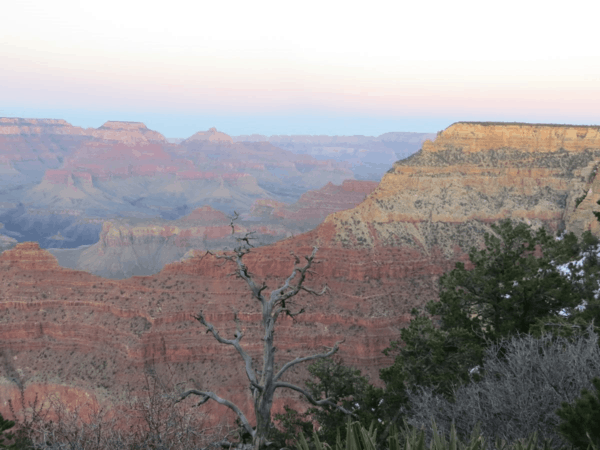 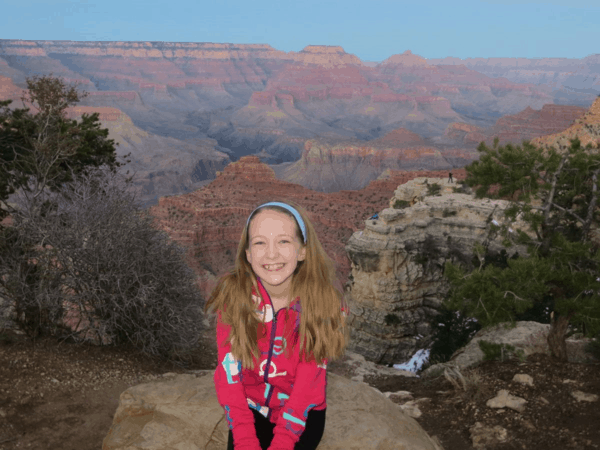 Enjoying the fading light at the Grand Canyon

We returned the next morning and stopped for the obligatory photo at the Grand Canyon National Park sign. 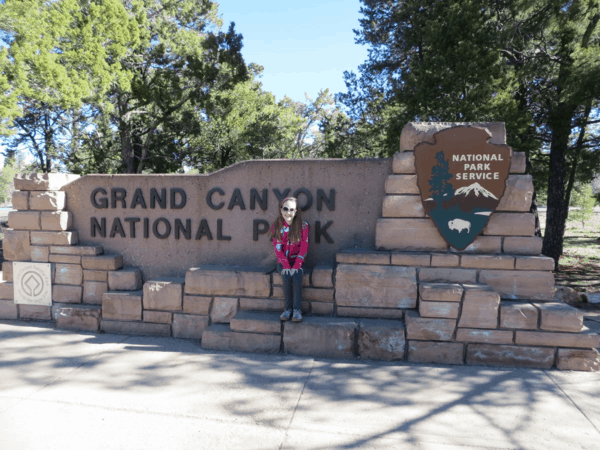 At the entrance to Grand Canyon National Park

We spent some time in the morning walking around Mather Point again as we were waiting to attend a presentation by one of the Rangers on wildlife in the Grand Canyon. 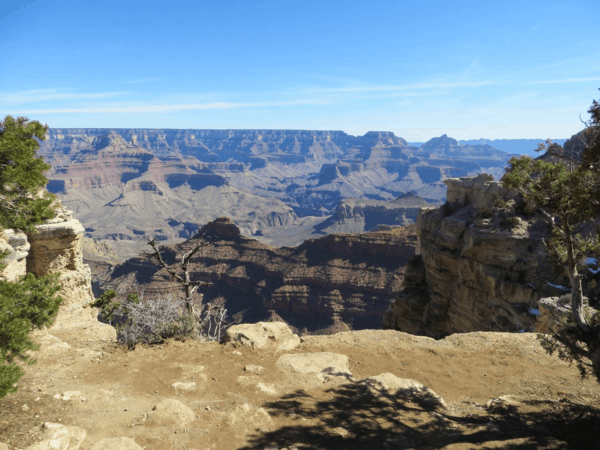 Near Mather Point in the morning 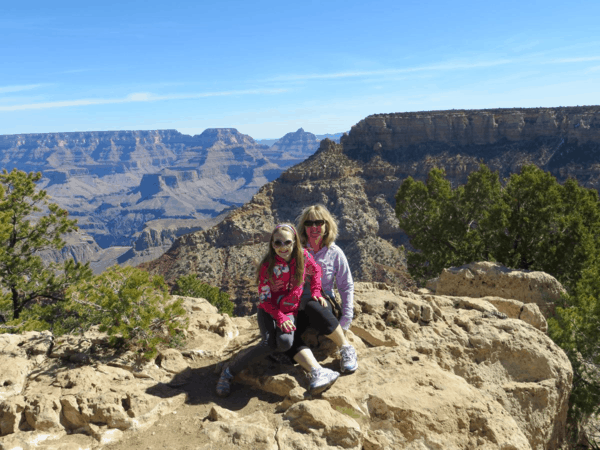 Two of us at the Grand Canyon

Emma was excited to earn her first Junior Ranger badge at Grand Canyon National Park and is keen to visit more parks so that she can collect additional badges. 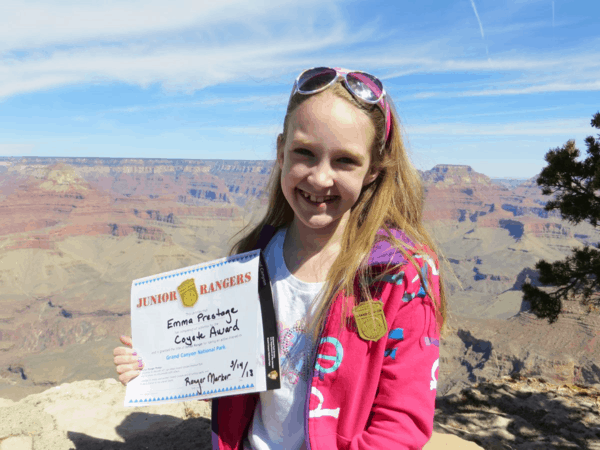 After Emma had earned her badge, we boarded one of the shuttle buses heading to Yaki Point and South Kaibab Trailhead to take in different viewpoints. At Yaki Point – South Rim of the Grand Canyon One of my favourite photos from our two days at the canyon is this one of a squirrel sitting on a ledge overlooking the canyon near Yaki Point apparently enjoying the view as much as we were. 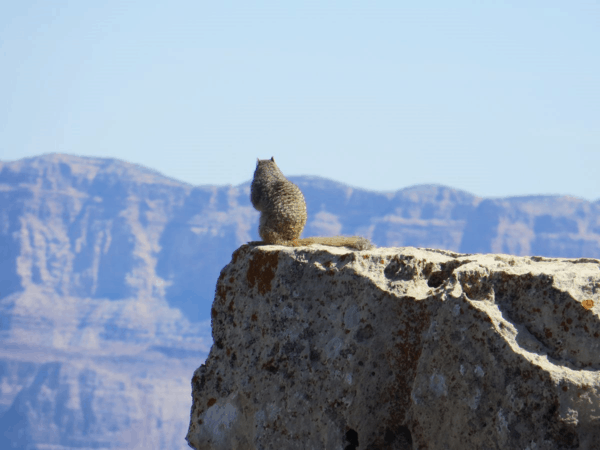 After returning to the Visitor’s Center, we transferred to another shuttle bus that transported us to Grand Canyon Village where we walked along the rim near the El Tovar Hotel, had an ice cream break, purchased a cap to protect Emma’s head from the sun and shopped for souvenirs at the Verkamp’s Visitor Center. View of Grand Canyon from rim near El Tovar Hotel

We were starting to tire at this point as it was getting on into the afternoon, but decided to take the Hermit’s Rest shuttle to Hopi Point in order to get a view of the Colorado River. 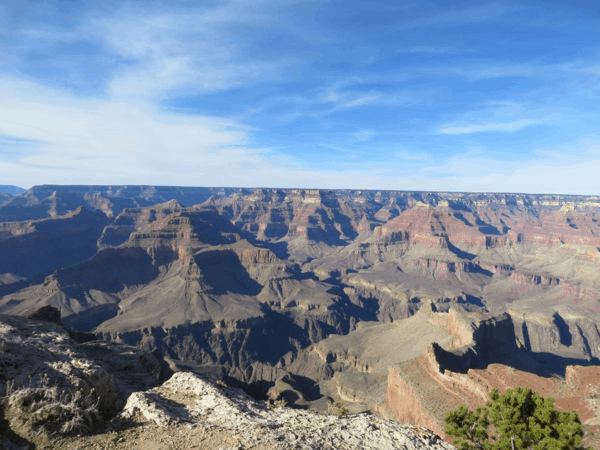 We opted to hike between Hopi Point and Mojave Point and the path was a bit narrow, icy and slippery in parts but we made it safely and the views were spectacular. Wildlife sightings were an unexpected highlight of our visit as well. Wildlife sightings in the park

We were spoiled by picture-perfect weather for the length of our visit to the Grand Canyon and enjoyed every moment of our stay. I am thankful to have had this opportunity to experience one of the world’s natural wonders firsthand.

A Family Holiday at the Four Seasons Las Vegas