A sample itinerary for a family visit to New York City on a long winter weekend including the Museum of Modern Art, the Metropolitan Museum of Art, the Empire State Building and Broadway shows.

Last July we gave our theatre-loving daughter a trip to New York City to see a couple of Broadway shows for her birthday. Her schedule was filled with rehearsals from early August until the end of January though so we weren’t able to get away until our Ontario Family Day long weekend which coincides with President’s Day in the U.S. on the third Monday in February.

This article may contain affiliate links which help support the site. If you click on an affiliate link and make a purchase then we receive a small commission at no additional cost to you.

We arrived in New York City around noon on Friday and were departing Monday afternoon with plans to jam as much as possible into our short visit. We had to adjust our expectations a bit though due to less than ideal weather conditions. The weather during our time in New York City could best be described as frigid with record low temperatures and face-numbing wind chill. There was an upside though as it was even colder back home in Toronto! As a result we spent more time at indoor attractions than we otherwise would have. 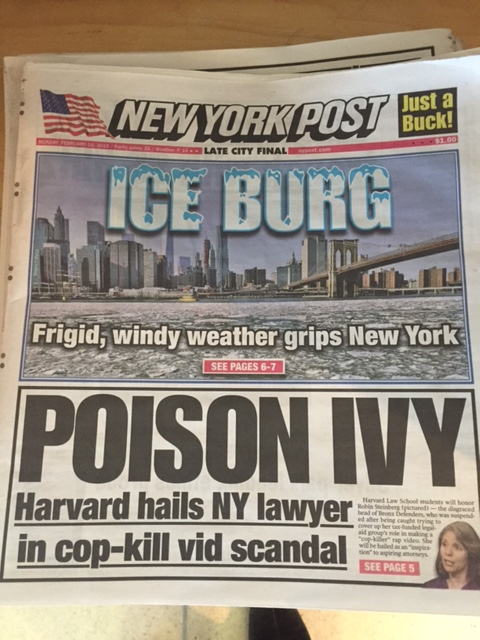 Newspaper headline during our stay in New York

We still walked a fair bit because it was easier than trying to hail a cab most of the time. We just bundled up and headed directly to our destination with no dawdling along the way. It’s quite possible to see and do a lot in New York in just 2.5 days provided that you are willing to be on the go. There was no down time during our stay as we visited two museums and the Empire State Building, saw three Broadway shows and shopped at some of our favourite stores. Despite the bitter cold, Emma was thrilled with her birthday weekend!

This was our 5th family trip to New York City and we had yet to visit the Museum of Modern Art (MoMA). We headed directly there (53rd Street between 5th and 6th Avenues) after checking into our hotel and were able to skip the lines since we were using a CityPASS. We didn’t have a great deal of time as we were meeting friends for dinner near Times Square before attending a Broadway show so we focused on seeing some of the museum’s most famous works by our favourite artists – Monet, Van Gogh and Picasso primarily. We also enjoyed the fabulous exhibition The Paris of Toulouse-Lautrec: Prints and Posters as well as the Andy Warhol works that were on display. 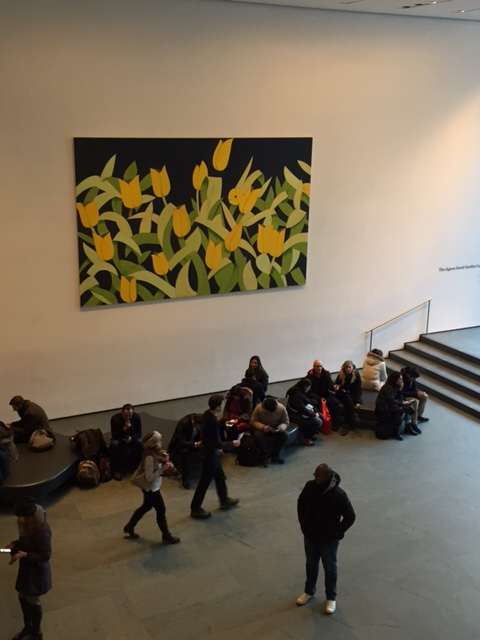 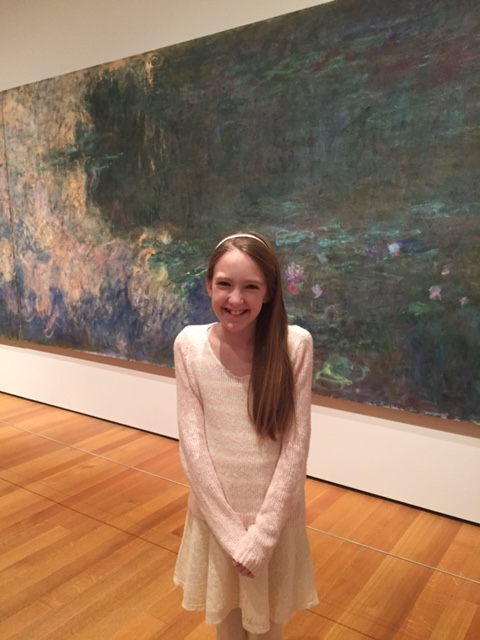 The Metropolitan Museum of Art

The Metropolitan Museum of Art on the Upper East Side (5th Avenue at 82nd Street) is another museum that we had never taken the time to visit on previous trips to New York and admission to it was also included with our CityPASS. Emma has been obsessed with Greek Mythology since first reading the Percy Jackson series a few years ago and The Met is featured in both the books and the first movie. We found a Percy Jackson-themed scavenger hunt for The Met online and used that as our starting point for visiting the museum on Saturday morning. 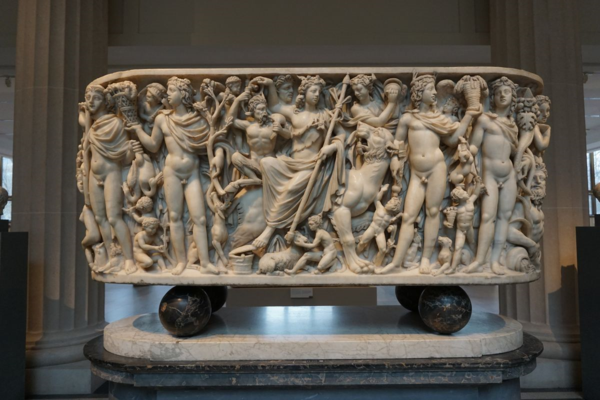 Marble Sarcophagus – Triumph of Dionysos and the Seasons

Once Emma had completed the questions on the Family Guide, we visited a few other galleries that she was interested in seeing. A favourite was the museum’s collection of Musical Instruments which includes approximately 5,000 examples from six continents dating from about 300 B.C. until present time. We also enjoyed a snack in the American Wing Café located alongside the Charles Engelhard Court on the first floor. Contrabass in the Musical Instrument Collection 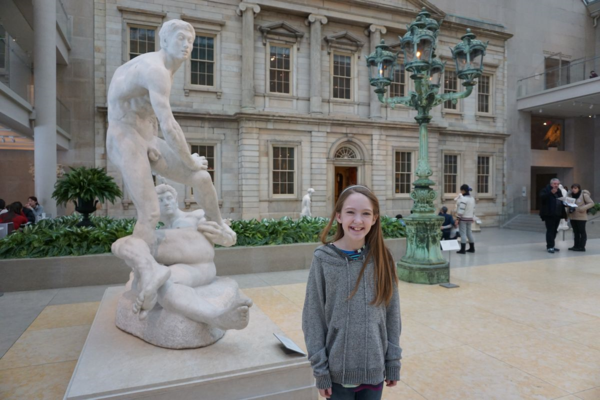 One of our priorities for this trip to New York was a visit to the Empire State Building. We stopped there while on a hop-on, hop-off sightseeing tour on our first family trip to New York City eight years ago but the line-ups were so long that we skipped it and went to the Top of the Rock Observation Deck at the Rockefeller Center instead. We had been warned that it would be really cold on the 86th Floor Observatory but admission was included with our CityPASS and we really wanted to experience it.

We took a cab down to the Empire State Building Sunday morning around 10am and there was essentially no queue whatsoever. We went directly to security and continued all the way to the 80th floor elevators without pausing at all so there was some advantage to visiting on a frigid winter day. We then took the stairs to the 86th floor in order to avoid the line for the elevators and had a fairly quick walk around the outdoor observatory as it was far too cold to linger. The elevator attendant informed us that it was about 15 degrees colder at that level (1,050 feet above the streets) and Emma could barely walk against the blowing wind. We had purchased the upgrade for the indoor 102nd floor observatory and it was well worth it to be able to enjoy the views of the New York skyline in out of the cold. One of the main reasons that we love New York City so much is the Broadway shows. We had promised Emma two shows as part of her birthday gift and she chose Aladdin and On the 20th Century starring Peter Gallagher and Kristin Chenoweth (a revival that was still in previews at the time of our visit). We decided to add on a third show since it was my husband’s birthday weekend and took in a performance of A Gentleman’s Guide to Love and Murder as well. The three shows are quite different but we enjoyed each of them. Disney’s Aladdin is, of course, suitable for all ages whereas the other two are probably best for those aged 10 and up. Emma’s highlight for the entire weekend was meeting the lovely Kristin Chenoweth outside the stage door after the performance. We waited about 45 minutes in the freezing cold and falling snow for her to make an appearance but it was absolutely worth it! 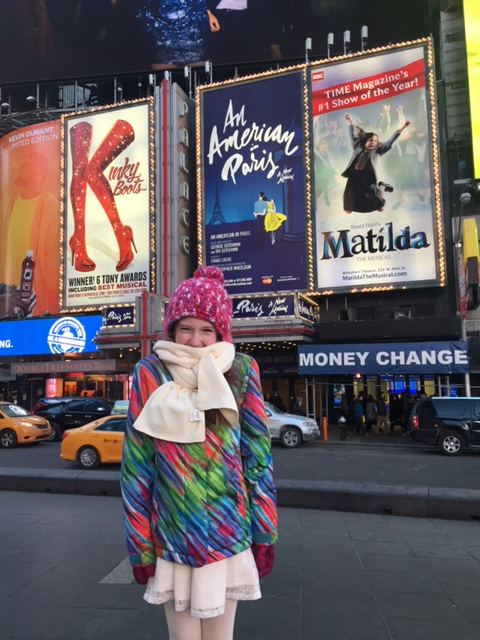 Meeting Kristin Chenoweth after the show

This was our fifth trip to New York City and the first time that we have returned to a hotel for a repeat stay. We stayed at the J.W. Marriott Essex House on our last visit to the city and I loved the location near Central Park and the amount of space that we had in our modern and luxurious Junior Suite. The art-deco style Essex House is an elegant and sophisticated historic hotel that first opened in New York in 1931 and was refurbished and rebranded as a J.W. Marriott hotel in the fall of 2012. The hotel is on Central Park South which is the ideal location for anyone who enjoys seeing the city on foot. We walked down to Times Square every day for shows and although we took a cab to The Met on Saturday morning to save time, we did walk back from there as well. 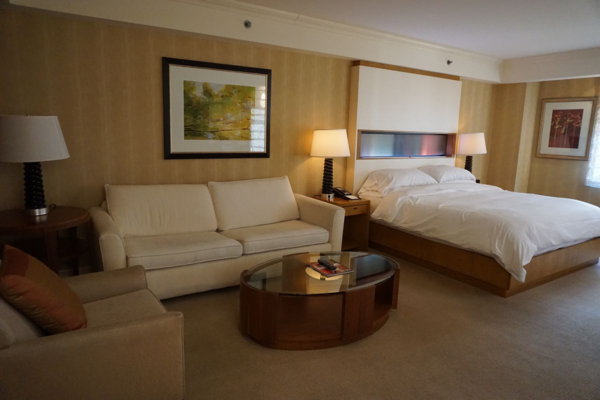 Our Junior Suite at Essex House
Powered by GetYourGuide. Become a partner.

Prior to our visit, I contacted the concierge at our hotel for restaurant recommendations primarily because we were concerned about finding an appropriate restaurant for the three of us to dine at on Valentine’s Day. He provided me with several suggestions near our hotel as well as several in the theatre district and they all sounded so good that it was difficult to choose.

On Friday evening we met friends for a lovely pre-show dinner at Thalia which was located on 8th Avenue at 50th very near to our theatre. Saturday was Valentine’s evening and we chose to dine pre-show at the RedEye Grill which is on 7th Avenue just a short walk from our hotel and Emma wasn’t even the only child in the restaurant. We have eaten a couple of times before at the retro 1950s themed Ellen’s Stardust Diner which is known for the singing wait staff. We had no plans to return but Emma really wanted to and this was her birthday weekend so we headed there for a very early dinner before the 6:30pm performance of Aladdin on Sunday. Dining at Thalia in the Theatre District 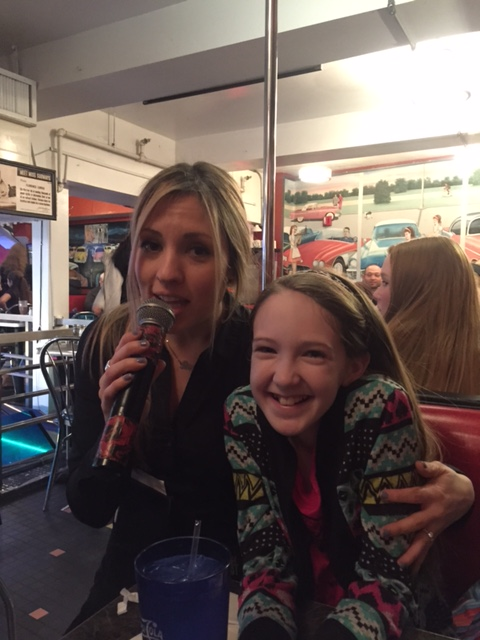 It wouldn’t be a trip to New York City without some shopping so we hit up a few of Emma’s favourites including M&M’s World, Dylan’s Candy Bar, Hershey’s World and F.A.O. Schwarz. Emma has almost outgrown American Girl Place (which is a little sad for me to tell the truth) but still insisted on having a look around the store. A new favourite was the LittleMissMatched store that we found on 5th Avenue (at 46th) when walking back from the Empire State Building. Emma fell in love with the brand’s colourful mixed pattern socks when we came across the store in Downtown Disney a few years ago and was delighted to discover that they now have an entire line of creative clothes and accessories. 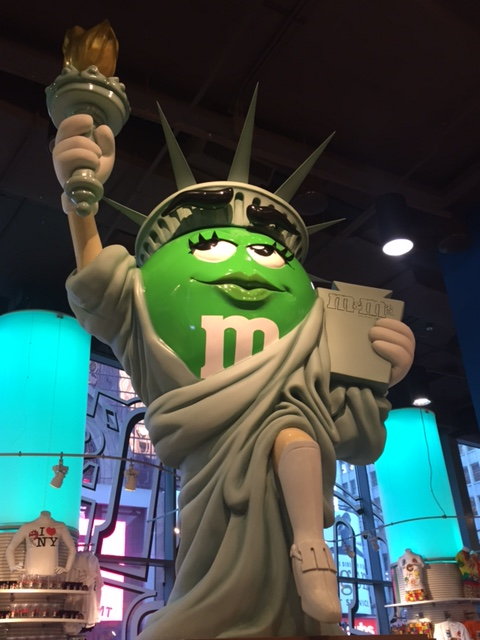 I had wanted to walk through a snowy Central Park on our last morning in the city but it was just too cold so we lounged around our warm hotel room until it was time to check out and head to the airport. Unfortunately, Emma still didn’t get her promised frozen hot chocolate at Serendipity. We stopped by while walking back from The Met but the wait was an hour and a half long so we opted to keep going. The next time we are in the city it will be a priority so I will have to find out if there are less busy times to visit. We had a fabulous getaway but the weekend went by far too fast and we are already thinking ahead to the next time we visit New York City.

Do you have recommendations for things to see and do in New York City? Let us know in the comments below.

My Goldilocks Weekend at the JW Marriott Essex House

Thank you to CityPass for providing complimentary media passes to use during our visit to New York City.