While visiting Amsterdam we arranged a private tour for our family with Holland Personal Tour Guide Gerk Kazemier. The Windmills and Traditions tour took us to Alkmaar, Edam, Marken and Zaanse Schans (the Windmill Park).

I have never enjoyed large group tours but have discovered over the last few years that a private tour can be the ideal way to explore and learn more about a destination particularly when travelling with kids. On our recent spring break trip to the Netherlands we wanted to see more than just the city of Amsterdam so we booked a private day tour with Gerk Kazemier of Holland Personal Tour Guide.

This article may contain affiliate links which help support the site. If you click on an affiliate link and make a purchase then we receive a small commission at no additional cost to you.

When we were planning the trip we debated using public transportation to explore outside of the city but concluded that it would have limited how much of the countryside we could see in one day if we were dependent on train schedules. We have enjoyed private tours in several other countries for the ease of transportation, the knowledge of a local guide and the ability to tailor the tour to our family’s needs so we opted to go that route in the Netherlands as well.

A quick Google search turned up Gerk’s website and great reviews of his services on Trip Advisor where he was a Certificate of Excellence winner for 2014. Gerk offers several private day tours in the Netherlands as well as walking tours in the city of Amsterdam. It was hard to choose because I wanted to see so many places but we opted for the Windmills & Traditions tour.

We chose the Windmills & Traditions tour because it offered a variety of stops that we thought would appeal to both us and our 11 year-old daughter. Emma is a bit of a cheese fanatic and was keen on the cheese tasting as well as trying on wooden shoes, whereas my husband and I were interested in seeing the Dutch countryside and some of the country’s famous windmills. This tour took us north of Amsterdam to Alkmaar, Edam, the island of Marken and to Zaanse Schans (a windmill park just outside of Amsterdam).

Gerk picked us up at our hotel at 9:30 and we headed out of the city to Alkmaar which was our first stop of the day. The city is primarily known for the traditional Cheese Market which is held Friday mornings during the spring and summer months from early April through early September. The market takes place on the Waagplein and historically dates back several centuries but today is primarily a display put on for tourists visiting the city.

As we were there in March, the market was not yet in session but we did visit the square where it takes place and Gerk explained the workings of a cheese market to us – how cheese is weighed, how bargaining takes place etc. The Waag (weighing house) on the market square now houses a cheese museum and a tourism information office.

We were in the square when the clock in the tower of the Waag struck the hour so were able to witness the display that includes music, miniature horses circling, and a trumpeter who raises his instrument to play.

We also enjoyed walking through the lovely historic streets of Alkmaar and doing a bit of shopping. Emma had a difficult time choosing from all of the delicious merchandise both at the BonChoco Chocolaterie  and at Kaan’s Kaashandel cheese shop. We put the brakes on when she wanted to buy all of the various cheeses she sampled because we were unsure of custom regulations but thoroughly enjoyed the cheese that she chose during our stay in London a few days later. 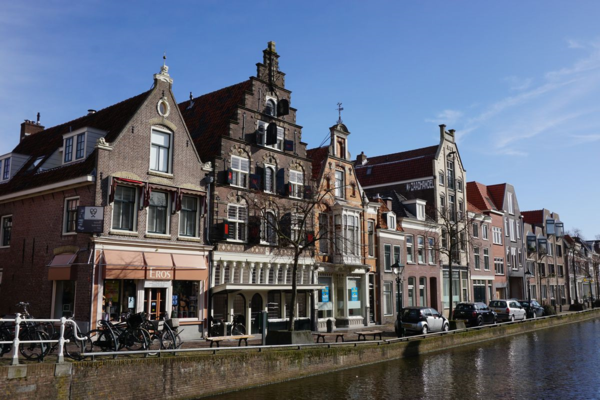 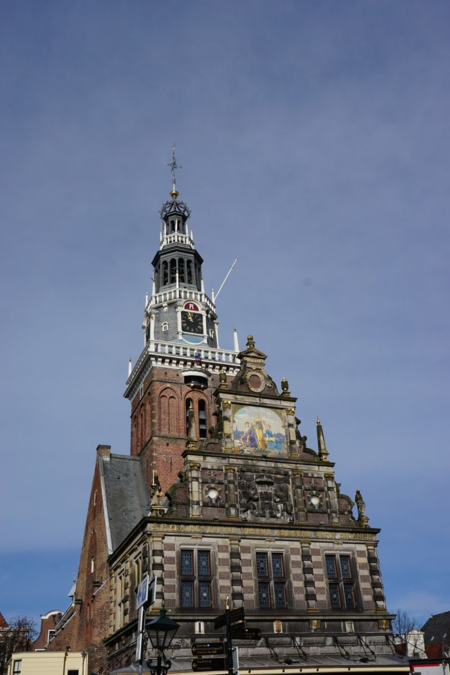 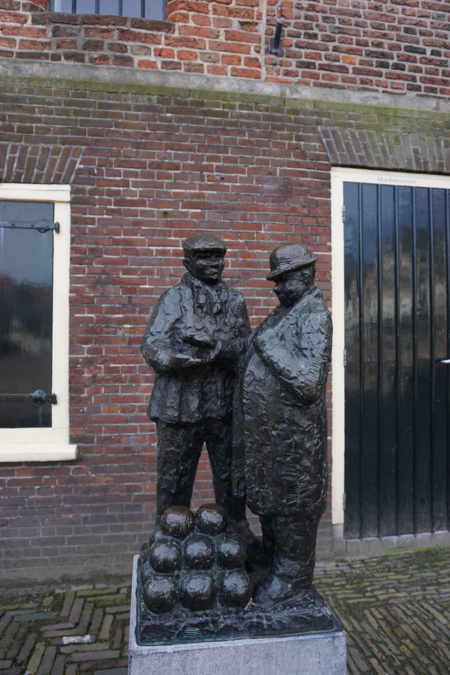 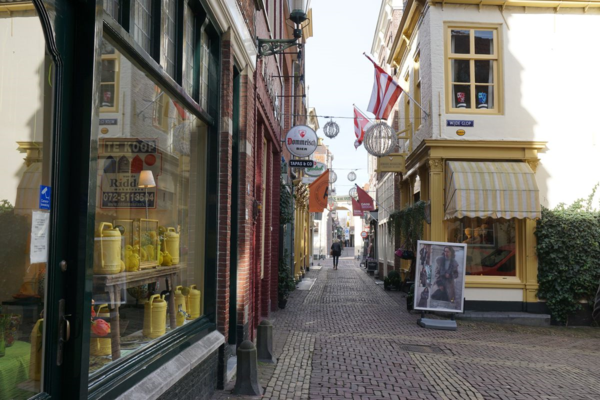 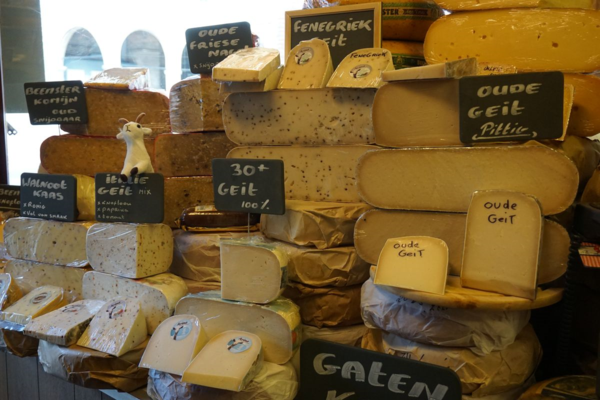 When we finished in Alkmaar we enjoyed a picturesque drive to Edam through the Dutch countryside seeing dikes and windmills along the way. This was one of my favourite parts of the day as I enjoyed learning more about the history of the country and the construction of the dikes. I had never really understand how the dike system worked to control flooding and reclaim land until I actually saw it for myself. 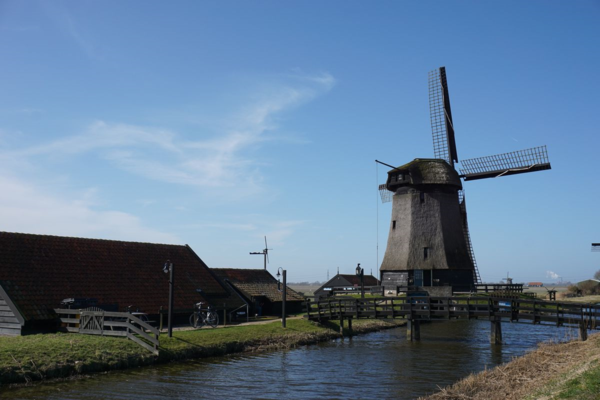 Windmill in the Dutch countryside

Lunch and a Walking Tour of Edam

Our visit to Edam started with a delicious traditional Dutch lunch at the lovely Hof Van Holland Cafe Restaurant followed by a walking tour of the town. I hadn’t had an opportunity to try Dutch pancakes yet so I chose the apple and cinnamon sugar pancake for my lunch and it was delicious!

Our walk through town took us through Dutch neighbourhoods, to the Cheese Market which is much smaller than the one in Alkmaar, and to Dam Square where we were able to stand atop the dam and look over the square. 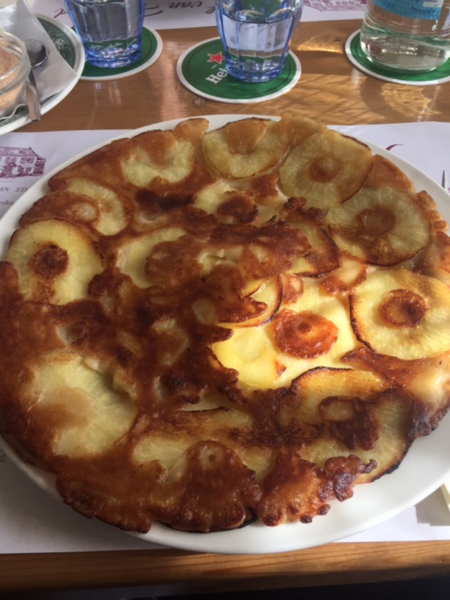 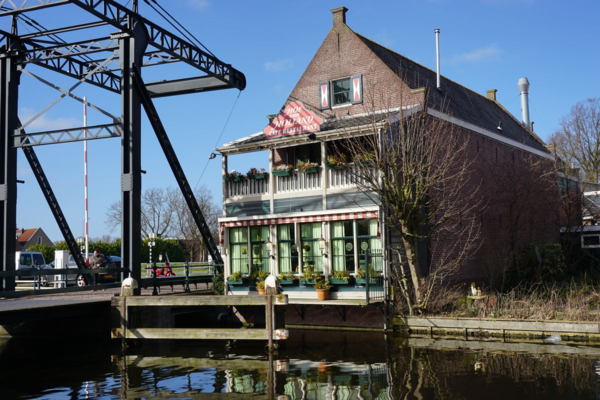 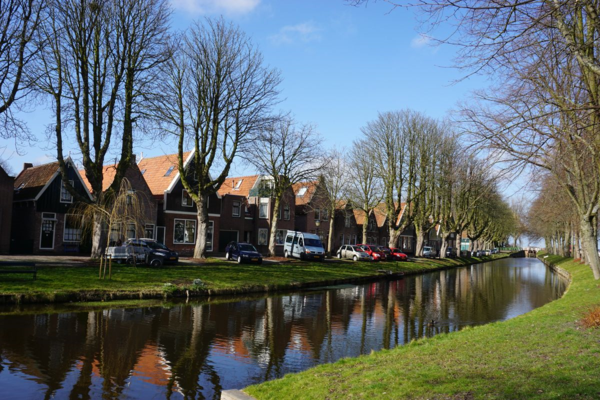 Homes along a canal in Edam 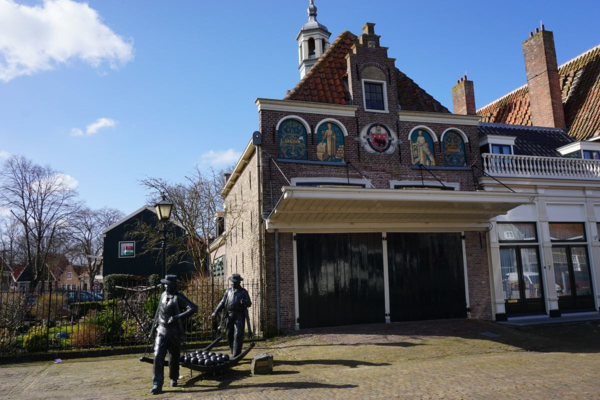 The Cheese Market in Edam 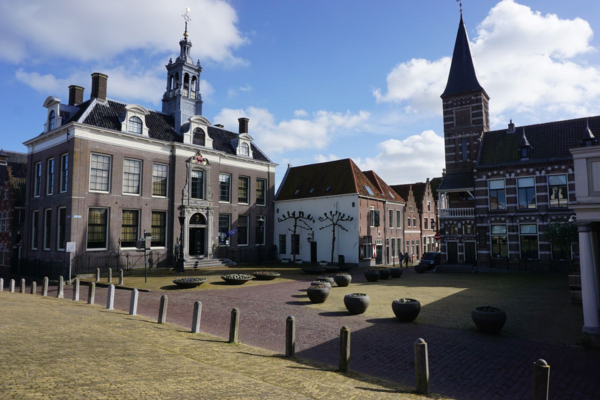 Dam Square (from atop the dam) 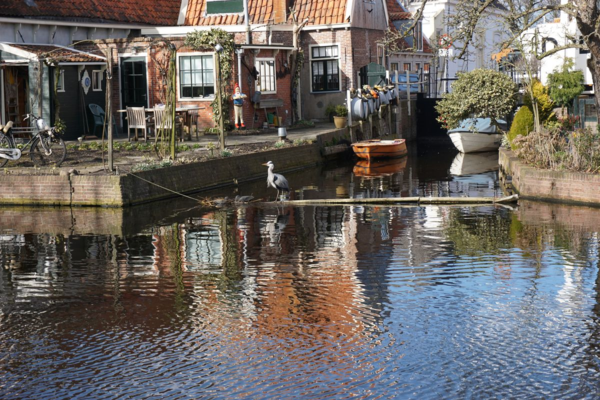 Walking along neighbourhood canals in Edam

The Village of Marken

Our third stop was the charming village of Marken which was once an island in the Zuiderzee separated from mainland Netherlands. For many centuries, Marken was an isolated fishing village with a distinctive culture, dialect, style of clothing and architecture. The completion of a dike cut access to the sea and the fishing industry was lost as a result.

A causeway now links Marken to the mainland and tourism is a thriving industry particularly during the summer months when busloads of tourists arrive each day. The village is much quieter during the winter months so we just had a quick walk around and headed on our way again. 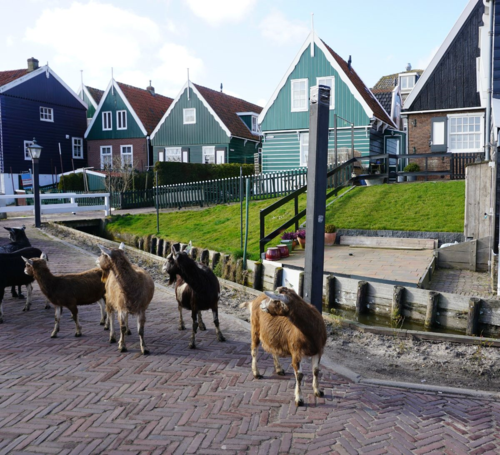 Escapee goats greeted us on arrival in Marken 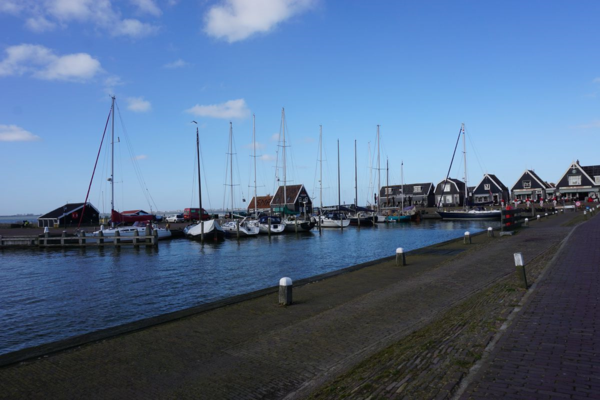 The village of Marken 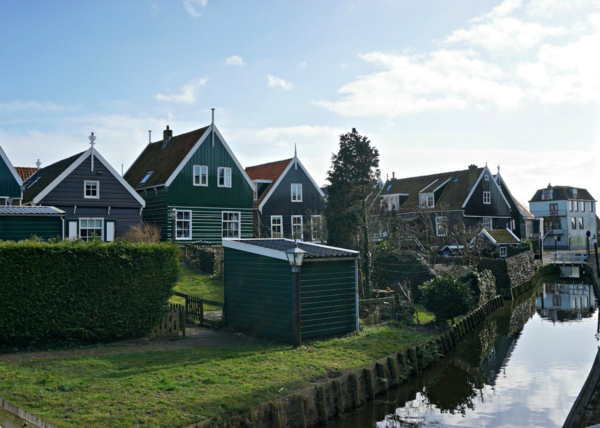 The final stop of the day was at Zaanse Schans (The Windmill Park) which is located just outside of Amsterdam. Zaanse Schans is a community of historic windmills, houses, barns and museums (many dating to the 16th and 17th century) that were reconstructed here beginning in the 1960s in order to preserve the unique heritage of the area. Visitors could easily spend half a day here touring the many buildings and museums but we arrived toward the end of the day and only had about an hour.

The windmills at Zaanse Schans are working windmills engaged in the production of a variety of industrial products. We were lucky that a strong breeze was blowing when we arrived and the sails of the windmills were turning so we were able to see the machines at work.

We visited a mill which grinds materials to be used in the production of paint and the more intrepid members of our family climbed the narrow staircase to the upper level for a look around outside (I waited on the main level). We also saw the cheesemaker’s shop as well as the clog museum and wooden shoe shop where Emma insisted that she needed a pair of wooden clogs to bring home. I’m not sure how comfortable they are but they are certainly cute! 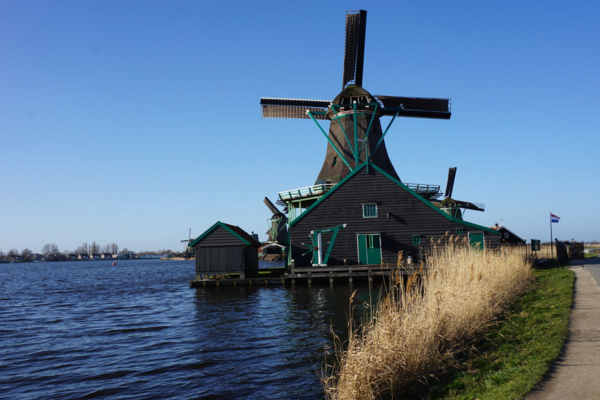 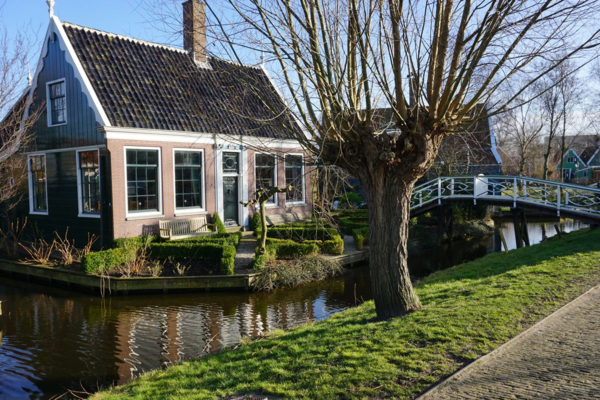 One of the homes in Zaanse Schans 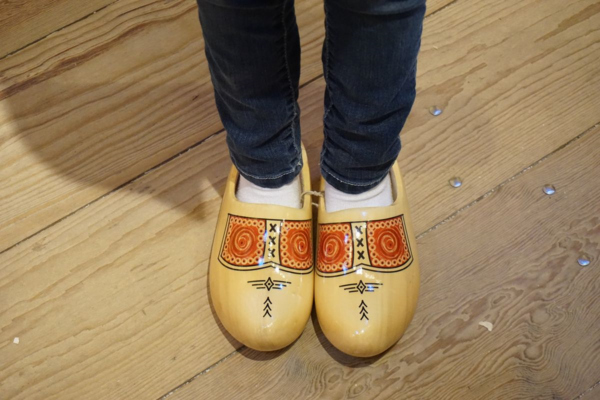 Showing off her new clogs

As lovely as it was to visit all of these sites, the highlight was spending our day with Gerk learning about the history of the Netherlands. I highly recommend this tour for anyone who is visiting Amsterdam and wanting to see a little more of the country as well.

10 Destinations for Spring Break in Europe

3 Quirky Museums to Visit in Amsterdam

A Long Weekend in Amsterdam with Kids