Our day trip with London Taxi Tour to Canterbury Cathedral, Dover Castle and to see the white cliffs of Dover.

While in London for spring break we decided to book a tour with London Taxi Tour as we had used them on previous trips for a Harry Potter tour and a day trip to Stratford-upon-Avon. This time we opted for a tour that would take us to Canterbury Cathedral as well as Dover where we could visit Dover Castle and see the famous white cliffs.

London Taxi Tour is a small family-run business that offers tours as well as airport and cruise transfers. Among the tours offered are Harry Potter, James Bond and Sherlock Holmes themed tours as well as tours within London and outside London to places such as Windsor Castle, Dover Castle, Bath, Stonehenge, Stratford-upon-Avon and more.

Our tour guide again this trip was Gordon who runs the business along with his wife, Carol. This was our third tour with him in 5 years so it was a bit like meeting up with an old friend. Gordon picked us up at our hotel, the Citadines Trafalgar Square, bright and early and we headed out of the city toward Canterbury.

We arrived in Canterbury first thing in the morning thanks to our early start from London and there were only a couple of other people visiting Canterbury Cathedral at the time. The cathedral is one of the oldest and best-known in the world and I have wanted to visit it since reading Chaucer’s The Canterbury Tales about pilgrims traveling to Canterbury when I was in highschool.

The cathedral was undergoing renovation so there was some scaffolding around the exterior but this no longer disappoints me as it once did since there seems to be repair work taking place on historic buildings wherever we go in Europe.

The cathedral is open to the public but is still a working church so may close to visitors if there is a service taking place. Guided tours are available beginning at 10:30, however, we opted for a self-guided tour as we were pressed for time given how much we wanted to see over the course of the day. We arrived shortly after the 9:00am opening so we also would have had to wait quite some time before the first tour of the day.

We spent perhaps an hour or so walking through the Cathedral including the Trinity Chapel which was built over 800 years ago for the Shrine of St. Thomas Becket, the Martyrdom, the Cloister and Chapter House, and the Crypt which is the oldest part of the cathedral.

Photography is permitted in all areas of the cathedral except for the Crypt which is a silent place for solemn reflection or prayer. Following this we had just a few minutes to walk around the property before meeting Gordon again to drive to Dover. There is so much history here that I would have loved to have had a tour by a knowledgeable guide who could have explained to us everything we were seeing but that will have to wait for another trip.

The cathedral in Canterbury, established in 597AD when Pope Gregory sent Augustine to England as a missionary, has been a holy place of worship for more than 1,400 years and has also been designated a World Heritage Site. Visitors enter through the Christ Church Gate and begin the tour inside. 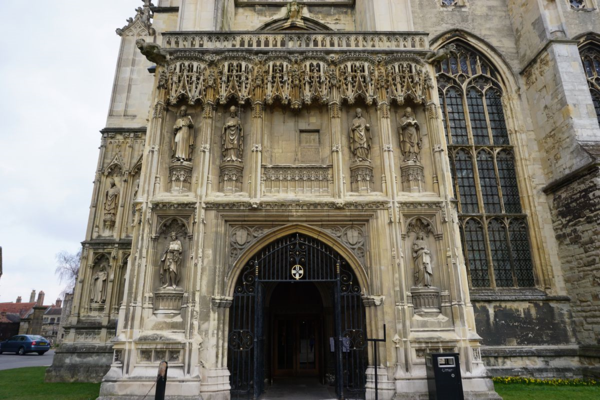 Many people are familiar with Canterbury Cathedral primarily because of the 12th century murder of the church’s Archbishop. In 1170, following a longstanding dispute with King Henry II, Archbishop Thomas Becket was murdered in the cathedral in the spot now referred to as the Martyrdom. After his death, Becket was canonized by the Pope and elevated to sainthood and his shrine at Canterbury soon became one of the most popular places for pilgrims to visit.

The Trinity Chapel housed St. Thomas’ shrine from 1220 until it was destroyed in 1538 by order of Henry VIII. A stone staircase worn by the knees and feet of pilgrims over many centuries leads to the Trinity Chapel where a simple candle now burns on the spot where the shrine once stood. Trinity Chapel also houses the tombs of King Henry IV and Edward, Prince of Wales, known as ‘The Black Prince’. 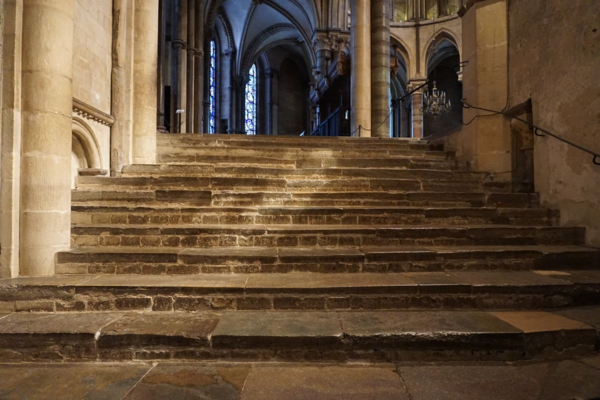 The Pilgrim’s Steps leading to the Shrine of St. Thomas 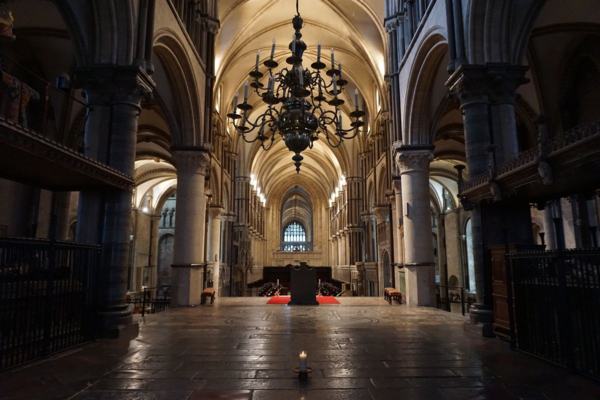 A glowing candle marks the site where the Shrine of St. Thomas once stood 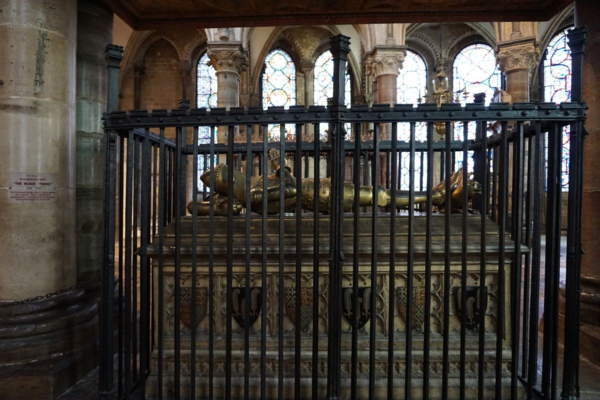 Tomb of The Black Prince 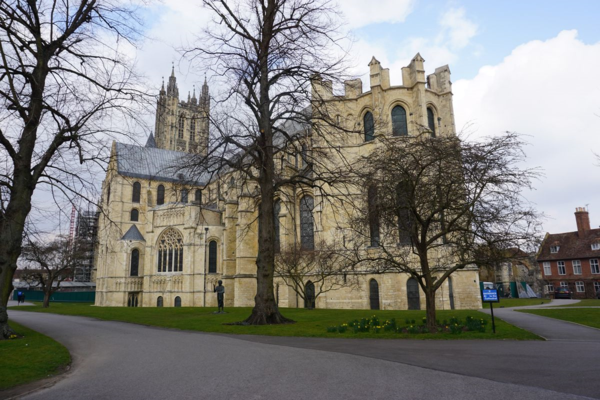 The grounds of Canterbury Cathedral

Upon arrival in Dover, Gordon dropped us off so that we could spend a couple of hours exploring Dover Castle. It was close to lunch time when we arrived in Dover and there’s a restaurant near the entrance but we opted to just have a snack so as not to waste valuable sightseeing time.

Dover Castle is located along the English coastline on the Strait of Dover. The strait is the narrowest point of the English Channel and thus the shortest sea crossing between England and the continent. There have been fortifications of some sort here for over 2,000 years as the site high above on the white cliffs is ideal for defence.

When the Romans invaded England in 43 AD they built a lighthouse on this site to guide ships into the harbour and it remains one of the best-preserved Roman lighthouses in Europe. After the Battle of Hastings in 1066, William the Conqueror built a castle here and around 1180 AD, Henry II began reconstructing that castle (and the work was continued by his successors) to create the grand medieval castle that still stands today.

When we arrived at the site, we purchased tickets at the Ticket Office and then headed uphill to the entrances for the wartime tunnels and the underground hospital. Both of these are only accessible by guided tour. There are two separate tours – Operation Dynamo: Rescue from Dunkirk lasts approximately 60 minutes and the tour of the Underground Hospital Annexe lasts approximately 20 minutes.

Numbers are capped on the tours and there was already a queue for the Operation Dynamo tour so we opted to wait in line for that one and skip the hospital tour as we weren’t certain that we would have time for both.

In the 18th century when England was under threat of invasion by Napoleon, a network of tunnels was dug in the cliffs in order to serve as barracks. These tunnels were brought back into service in World War II when a command centre for British navy operations was set up and Operation Dynamo was organized from here. Operation Dynamo was the code-name for the 1940 evacuation of troops from the beaches and harbour of Dunkirk, France.

A tour guide leads visitors through the rooms that have been recreated to what they would have been in 1940. Multimedia presentations and film footage from the time assist the guide in bringing the story to life for visitors. Photography is not allowed inside the tunnels. 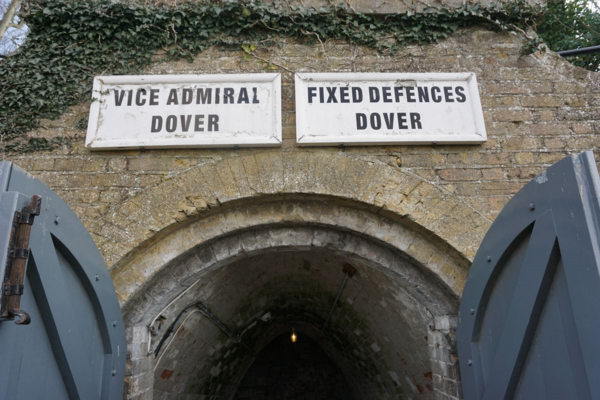 After learning about the role that Dover Castle played in World War II we headed to the Great Tower to learn more about the medieval history of the site. The Great Tower was designed by King Henry II as a place to entertain distinguished visitors. The rooms have now been recreated so visitors can see what the medieval palace would have looked like in the 12th century.

When we visited there were historical interpreters available to answer questions and offer details about the furnishings and the history of the castle itself. It’s all very hands-on and kid-friendly as the furnishings and objects are replicas and not the real thing. Apparently there are also costumed actors playing medieval characters including the King around at certain times but there were none in sight when we visited in mid-March. 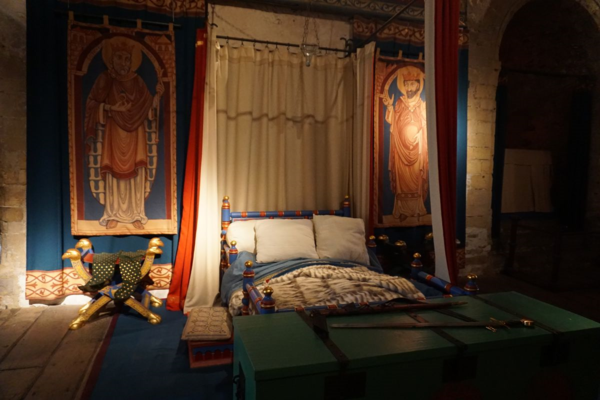 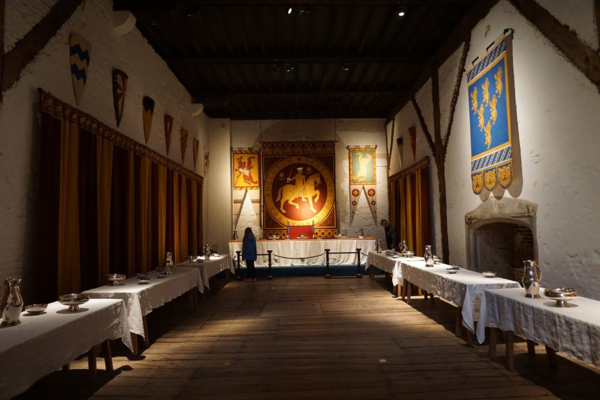 I also recommend climbing the spiral staircase to the roof where you will be treated to a great view over the English Channel. It was a bit overcast on the day we visited but you can see France on the other side of the Channel. 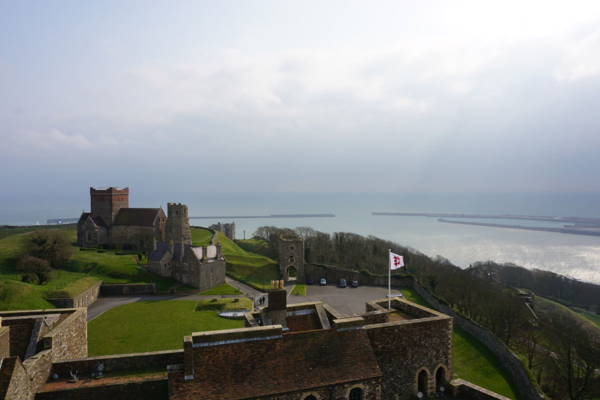 View from the roof of the Great Tower

Dover Castle is a popular filming site and we were quite excited to learn that some scenes from the movie Into the Woods had been filmed here. We had read online that there were Into the Woods tours held on certain dates but, unfortunately, they didn’t coincide with the dates of our visit. We asked a staff member about the filming locations and he told us that the scene with Cinderella on the steps of the palace was filmed on the steps leading into the Great Tower. I wasn’t entirely convinced because it didn’t look the same to me but we posed for photos there anyway! 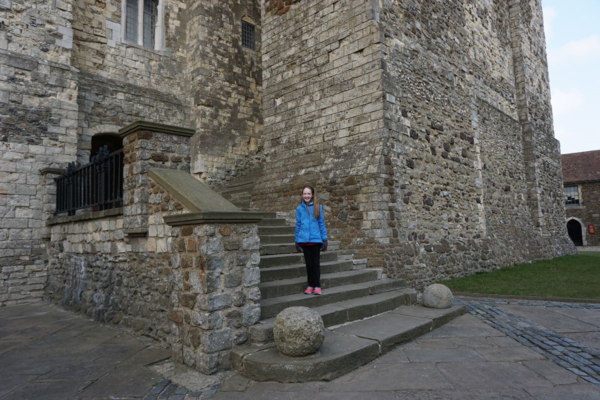 “On the steps of the palace”

Dover Castle is a fun family-friendly attraction that is great for all ages of visitors. We easily could have spent an entire day here if we hadn’t been on a tight sightseeing schedule.

After leaving Dover Castle, Gordon took us to a spot where we could walk along the coast and look up at the white chalk cliffs rather than taking us to the top which is what is done on most tours of the White Cliffs of Dover. The day had turned quite cool and windy so we kept our walk fairly brief while I snapped a few photos of the cliffs, the grazing sheep and the view of the English Channel.

We were running ahead of schedule when we departed from Dover so had time to stop at the Battle of Britain Memorial at Capel-le-Ferne as well. The National Memorial to the Few is located on the white cliffs between Dover and Folkestone in Kent and is dedicated to Churchill’s “few” who fought in the skies along the coast to prevent the invasion of England.

Arriving at the memorial site, visitors are greeted by a low wall bearing Churchill’s famous quote from one of his wartime speeches, “Never in the field of human conflict was so much owed by so many to so few“. The Memorial also includes the Christopher Foxley-Norris Memorial Wall which lists the names of all those who took part in the Battle of Britain, a replica of a Hurricane and of a Spitfire fighter plane, and a statue of an airman gazing across the Channel toward France.

After a walk around the memorial site, it was back into the car for the drive back to London. We have enjoyed each of the tours that we have taken with London Taxi Tour immensely and I have no hesitation in recommending their tours. Gordon is professional, friendly and knowledgeable which is precisely what we are looking for when hiring a private guide.