Highlights of a family visit to New Brunswick.

New Brunswick is another great destination for families visiting Atlantic Canada with its wide variety of things to do.  In August of 2002 we spent 4 nights in New Brunswick prior to a week long vacation in Prince Edward Island.  At the time of this vacation our daughter, Katie, was 5 years old.  We flew from Toronto to St. John, New Brunswick and a delayed flight meant a much later arrival in St. Andrews-by-the-Sea than we had anticipated.  We even drove through one of the famous fogs (which was absolutely as thick as soup) rolling in off the Bay of Fundy.

We stayed for three nights at the historic seaside resort The Fairmont Algonquin (Editor’s Note: the resort is no longer managed by the Fairmont chain of hotels and is now known as The Algonquin Resort). The historic tudor-style hotel which overlooks Passamaquoddy Bay has been welcoming travelers since 1889 with its perfect blend of tradition and modern luxury. 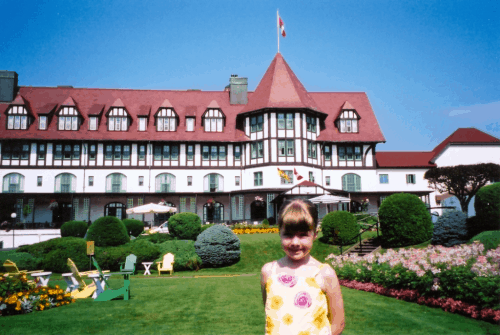 Katie at The Fairmont Algonquin in St. Andrews-by-the-Sea, New Brunswick

St. Andrews-by-the-Sea, which has been named a National Historic District, is a charming seaside village whose main street is lined with shops, art galleries and boutiques.  The village is so beautiful that it is virtually impossible not to fall immediately in love with it.  And if you tire of the charming architecture of the village there is always the natural beauty of the sea shore to gaze upon.

On the pier in St. Andrews-by-the-Sea at low tide

One of the attractions that we enjoyed in St. Andrews-by-the-Sea was Kingsbrae Gardens.  Kingsbrae is a 27 acre horticultural garden which includes themed gardens, ponds and a children’s area.  The gardens are open seasonally (generally May through October) and guided tours are available. 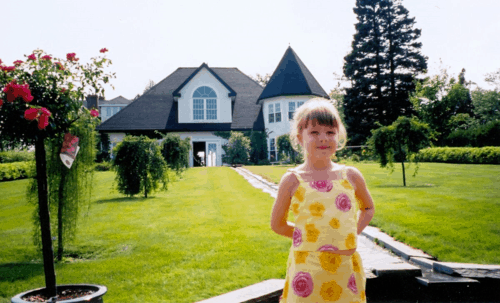 While staying in St. Andrews we drove to Campobello Island to see the summer home of Franklin Delano Roosevelt in Roosevelt Campobello International Park.  The park which is located on the southern end of Campobello Island in New Brunswick, Canada can only be reached by car by crossing the border into Calais, Maine.  (If you are planning to travel to Campobello by car then make sure to factor a wait at the border crossing into the plans for the day.)  During the summer season there is also a car ferry service available from Deer Island.  We chose to drive to Campobello through Maine and return via ferry.

The Park is unique in that it was established by international treaty and is operated by a commission with members from both Canada and the United States.  The Park includes The Roosevelt Cottage which was FDR’s summer home as well as many walking trails that allow visitors to commune with nature in the place that meant so much to the President.  The Grounds and Park Natural Area are open to visitors year-round while the Roosevelt Cottage and Visitor Center are open from late May into October (see the website for exact dates and times).

Another popular attraction on Campobello Island is the East Quoddy Lighthouse which looks out over the Bay of Fundy and is considered to be one of the most photographed lighthouses in the world. 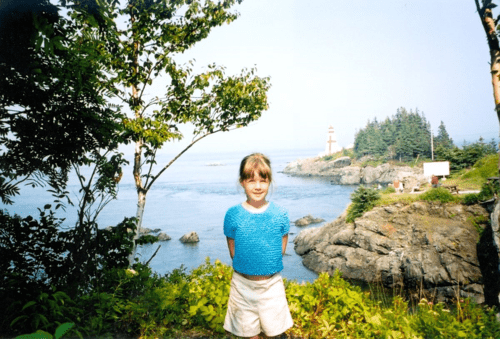 Another memorable activity was the whale-watching cruise in the Bay of Fundy that we took from St. Andrews-by-the-Sea. It was my first time in a boat on the ocean and I was a bit nervous but the excitement of seeing whales and porpoises soon vanquished any reservations that I had. 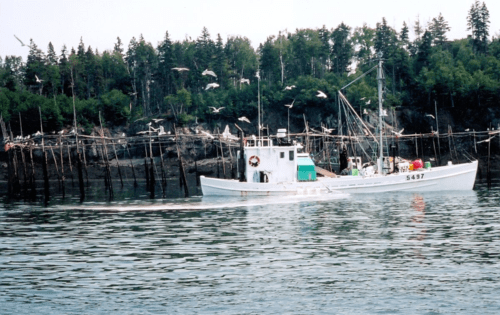 Herring weirs in the Bay of Fundy

After three days we left St. Andrews-by-the-Sea and drove to Moncton to spend two nights at The Delta Beausejour in downtown Moncton.  The following morning we drove out of the city to the  The Hopewell Rocks to see them at low tide.  The Hopewell Rocks are located in The Bay of Fundy which experiences the highest tides in the world.  The Bay of Fundy is currently an official finalist to be named one of the New 7 Wonders of Nature.  The 7 Wonders of Nature are being determined by popular vote and will be announced on November 11, 2011.

It is such a cool experience to walk around on the ocean floor and then come back later and see the high water level.  Katie particularly liked playing with the seaweed that littered the ocean floor.  The shapes of the rocks with the trees growing on tops of some are amazing.  (Hence the nickname – “The Flowerpot Rocks”)  After thoroughly exploring the ocean floor we spent the better part of the day sightseeing in the area and stopping to see some of the covered bridges that this area is well-known for.  Later we came back to marvel at how the high tide now completely covered the area where we had walked earlier in the day. 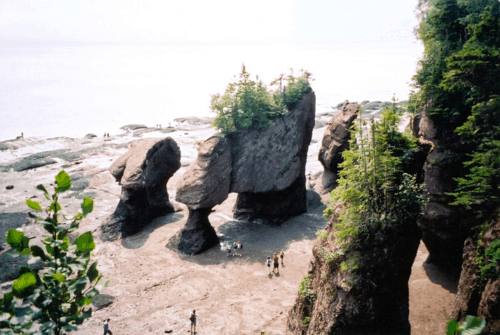 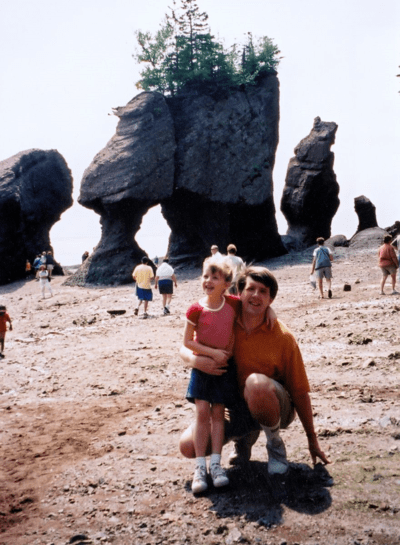 On the ocean floor of the Bay of Fundy (Hopewell Rocks) 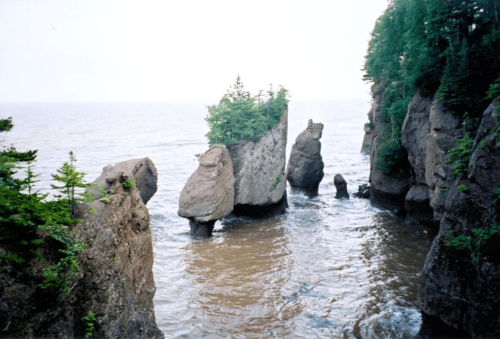 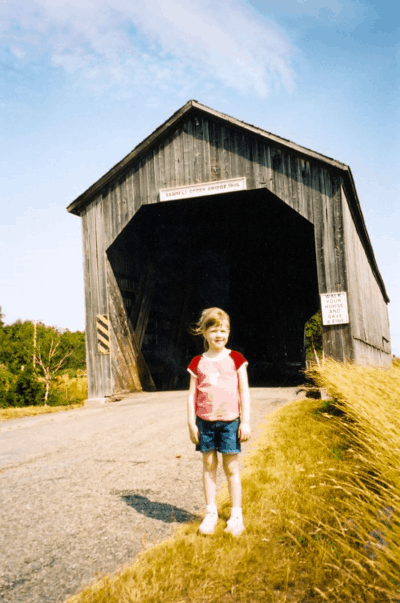 After spending the night in Moncton we made a brief stop at The Magnetic Hill before continuing our vacation in Prince Edward Island.  The Magnetic Hill which is located just outside the city of Moncton is an example of a “gravity hill” where the rising and descending terrain creates the optical illusion that a car placed in neutral rolls back up hill.  (No need to spoil the fun by telling the kids that it’s just an illusion.)  There is also a water park and a zoo in the area. 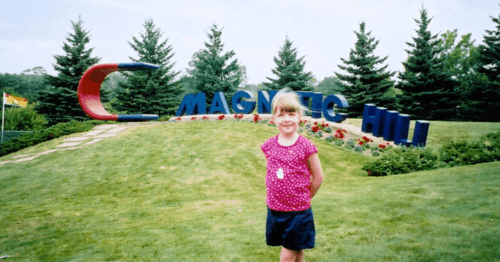 From the Magnetic Hill we drove to The Confederation Bridge to cross from New Brunswick to Prince Edward Island.  The Confederation Bridge was constructed after a great deal of debate about whether a fixed link between PEI and the mainland was a good idea and was opened to traffic in the spring of 1997.  The bridge spans the Abegweit Passage of the Northumberland Strait crossing from the province of New Brunswick to Prince Edward Island.  At 12.9km long the bridge is the world’s largest bridge over ice-covered water and takes approximately ten minutes to cross at the posted speed limit of 80km/hr.  An interesting fact about the toll on the bridge is that payment is for leaving Prince Edward Island only – no toll is charged to drive onto the island.  The bridge operates 24 hours a day, seven days a week.  Current information about tolls for vehicles and shuttles for pedestrians and cyclists can be found at the website.

A visit to Atlantic Canada wouldn’t be complete without spending some time in New Brunswick to experience the natural beauty and charm of the province.  Drive along the coast of the Bay of Fundy to experience the highest tides in the world, explore the cities of St. John and Moncton, fish in the Miramichi River, learn about Acadian culture or just play on warm, saltwater beaches.  Plenty of activities and attractions to keep a family entertained and busy on a vacation in the province of New Brunswick that will leave everyone wanting to come back for more.  Visit the website for Tourism New Brunswick for more information about the province’s diverse attractions.

Exploring the Bay of Fundy at Hopewell Rocks