It has been almost exactly two years since we spent a day in Oslo while on a Baltic cruise.  Our ship was only docked in Oslo from 7am – 2pm – the shortest day of any of our ports of call – and as a result Oslo was the one port on our cruise where I got back on the ship feeling shortchanged.  I really felt that we hadn’t even begun to see Oslo and I wanted to see so much more.  We sailed away from Oslo already dreaming about a return trip to spend a few days in the city and cruise the Norwegian fjords which we had heard were incredibly beautiful.

Perhaps because we had visited Oslo so recently, and because we had fallen for it so completely, the terror attacks of July 22nd felt very much closer to home than many of the similar incidents that have occurred in other countries.  No country deserves to endure what Oslo has but it seems particularly tragic to have taken place so close to the Nobel Peace Centre which represents the world’s hope for peace.  Since that horrific Friday, I have been remembering the wonderful day that we spent in Oslo and dreaming again of a return trip to see the beautiful city, the friendly Norwegians and the dramatic fjords.

One of our favourite spots in Oslo was the Vigeland Sculpture Park.  The work is breathtaking and unlike anything I have ever seen before.  On a longer visit to Oslo we would definitely plan on spending part of a day here, taking the time to fully appreciate the statues before picnicking in the park like the locals do. Downtown Oslo is home to the Nobel Peace Center where the Nobel Peace Prize is awarded each year.   The Center houses fascinating exhibits which allow visitors to navigate through information, photos, texts and videos about each of the Nobel Peace laureates.  Our visit was rushed, however, when we return much more time will be devoted to exploring the exhibits and discussing them with our children. 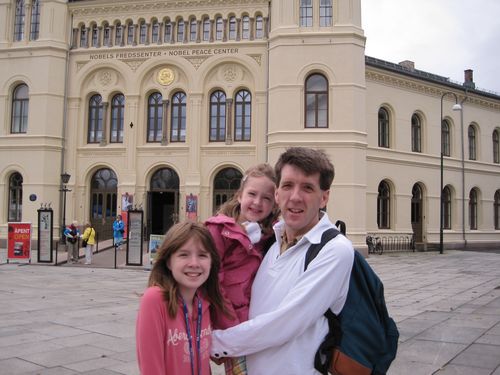 Outside the Nobel Peace Center

Our remaining time in Oslo was spent walking around town before heading back towards our ship which was docked by Akershus Fortress.  We walked by the Royal Palace, the Norwegian Parliament (Stortinget) and the Grand Hotel which are all impressive structures.  We were quite disappointed that we didn’t have time to visit the Viking Museum or the Munch Museum to see the famous painting “The Scream” which was painted by Edvard Munch, one of Norway’s best-known artists.   They will have to be priorities on a future visit as well. 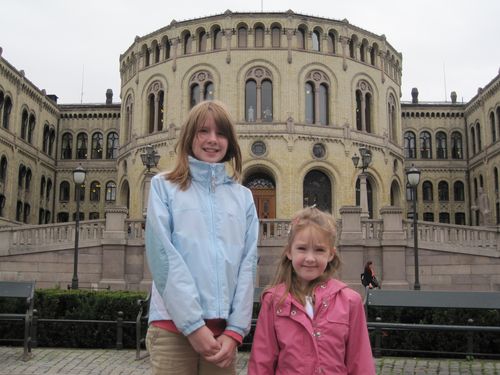 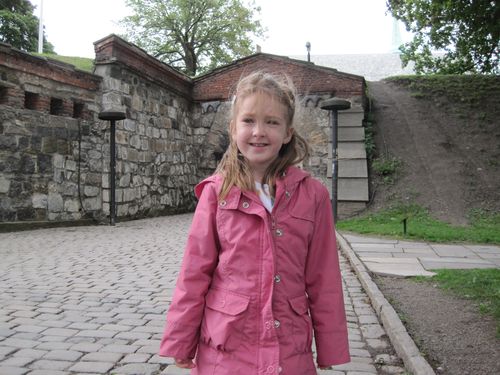 My thoughts are with the residents of Oslo, and all Norwegians, as they attempt to recover from the tragic deaths of so many young people.  This was a sharp reminder that even though a terror attack can happen  in the most unexpected of places we cannot let fear stop us from living our lives or from traveling the world.  I agree with the Norwegian Prime Minister who has said that the answer to terrorism is more democracy and openness not less and I truly believe that the more people travel and are exposed to other cultures the more they realize that people the world over are essentially the same and want the same things from life.  As Mark Twain once said, “travel is fatal to prejudice, bigotry, and narrow-mindedness” and if there is one thing that we need more of in today’s world it is open-mindedness and acceptance of others.  This attack in no way will deter us from returning to Norway – we will definitely be going back to visit this amazing, beautiful and resilient country again.