Visitors need only take a short walk from the road in Elliston to reach one of the most accessible puffin colonies in Newfoundland.

One of the priorities for our Newfoundland trip this past summer was to see Atlantic puffins.  While we were in St. John’s we went on a boat tour to the Witless Bay Ecological Reserve for the express purpose of seeing these birds but that didn’t go quite as planned.  Thankfully, we were given a second chance a few days later.

The Atlantic Puffin is the only species of puffin that lives on the North Atlantic ocean and is the official bird of the province of Newfoundland and Labrador.  The birds live at sea most of the year but return to land over the summer months to breed and raise their young.  The puffins nest on steep grassy clifftops for the protection from predators.  They build their nests either between rocky crevices or by burrowing a hole in the soil and tend to return to the same burrow year after year.  The puffins are easy to spot because of the distinctive triangular bill which turns bright orange during breeding season.

Emma and I had both been so excited about the prospect of seeing puffins in Witless Bay but the rough seas on our boat tour had upset her so much that she hadn’t been able to focus on the birds.  It was disappointing but I didn’t see any solution so we left St. John’s for Terra Nova National Park thinking that we wouldn’t have another opportunity to see puffins.  While planning out a day trip from Terra Nova, however, we happened upon a mention of Elliston’s Puffin Viewing Site where puffins could be seen from dry land.  We were planning to spend the next day driving to Trinity and Bonavista and Elliston was en route so we were hopeful that she might see puffins yet. 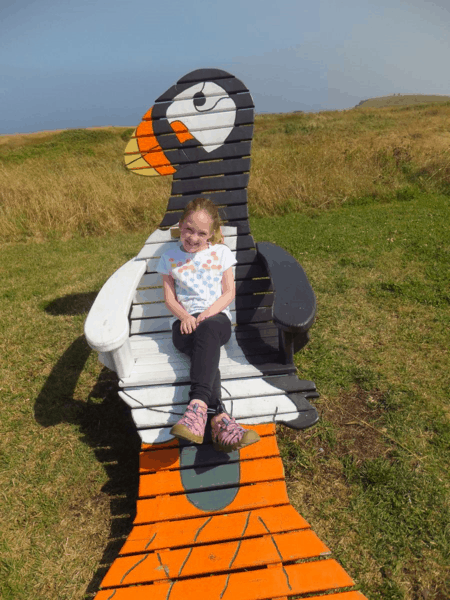 Arriving at the Elliston Puffin Site

Elliston is located on the Bonavista Peninsula, a short drive from Trinity, and has one of the most accessible puffin colonies in Newfoundland.  This is simply the best spot to see puffins in their natural habitat without ever leaving dry land.  Driving into Elliston there is a welcome sign proclaiming the town to be The Root Cellar Capital of the World which left me a little confused.  Why would the town choose to brag about root cellars when they have this amazing access to puffins that they should be shouting about?

When we arrived there was a dense fog hanging over the bay and I was worried that we wouldn’t be able to see any birds but it lifted, as if on cue, while we walked toward the puffin site.  Even without the prospect of seeing sea birds up close, this place is worth the stop – the scenery is absolutely breathtaking. A short hike to the Puffin Site 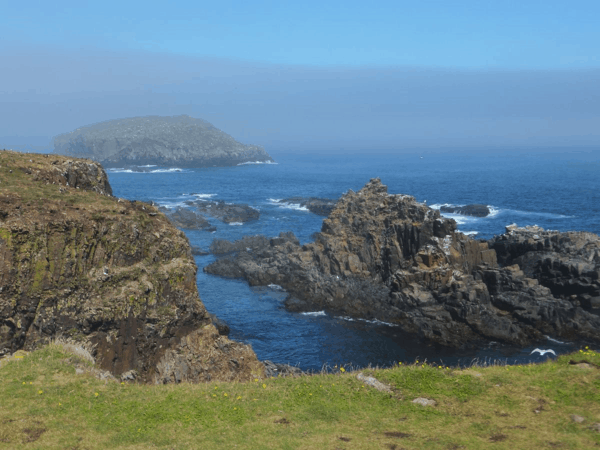 Excitement began to build as we approached and could see puffins flying through the air and nesting on the cliffs.

First glimpse of the puffins 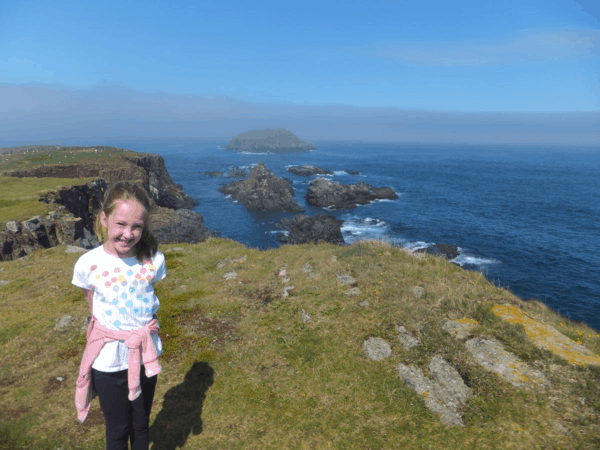 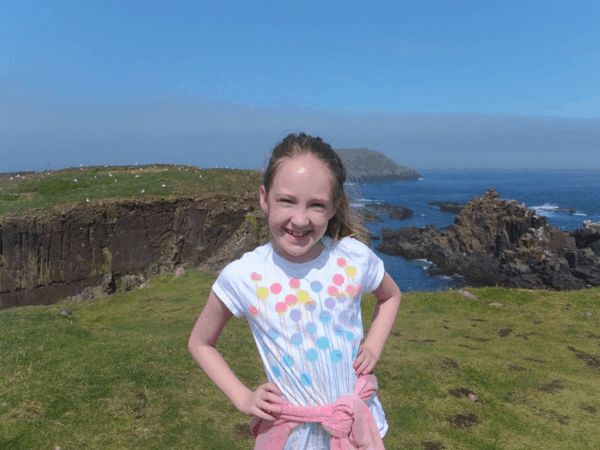 A mere 5 minute walk from where we parked our car and we could see hundreds and hundreds of puffins just a short distance away.  No need for binoculars here. 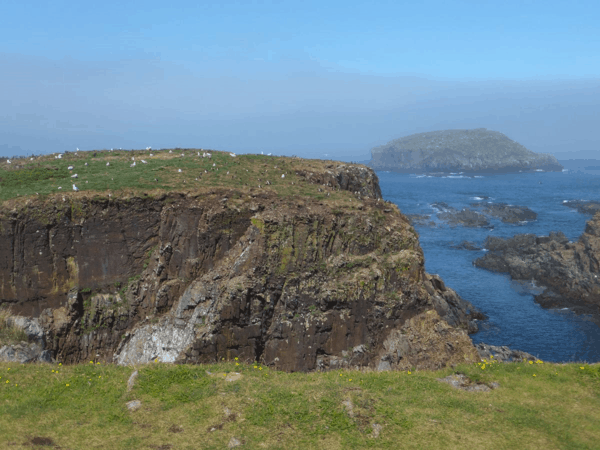 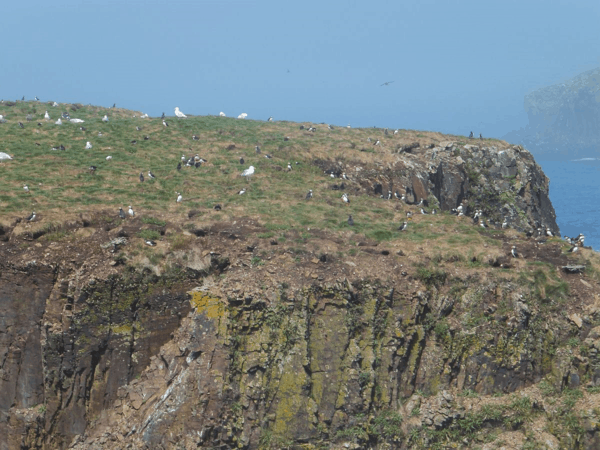 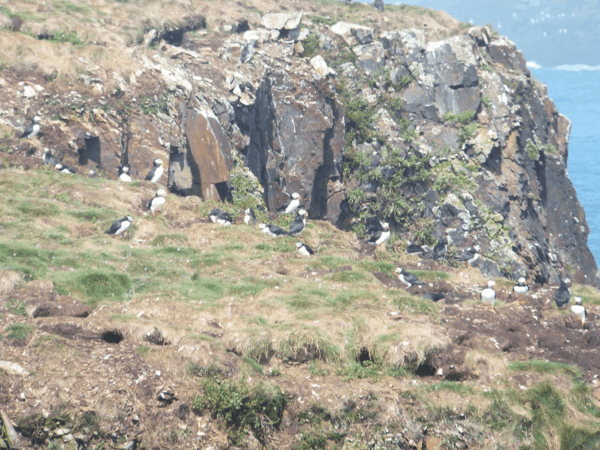 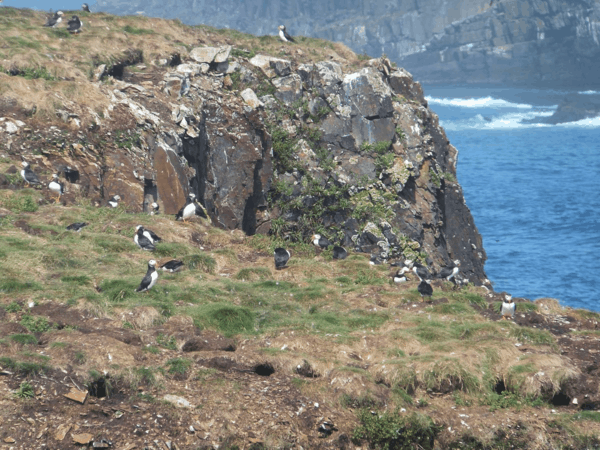 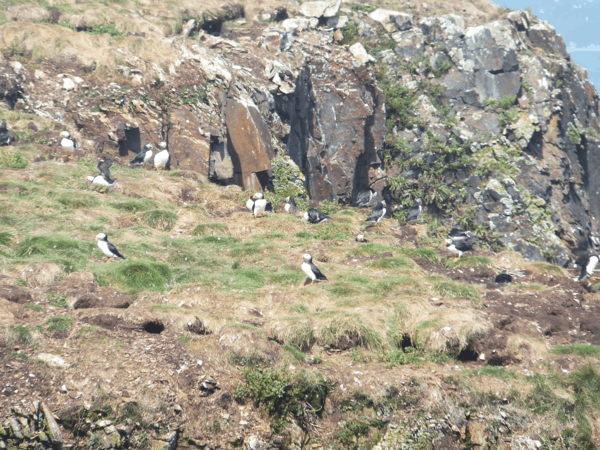 Emma was thrilled to see the puffins that she had so desperately wanted to see without having to endure another boat ride and we were much closer to the birds than we ever could have been on the water.  Thank goodness for second chances!