One of our family’s traditions is to gift ourselves with a holiday getaway – and keep the destination a secret from the girls until Christmas morning.

A number of years ago, my husband and I thought that it might be fun for our family to go away for a few days after Christmas. That decision was the start of a family holiday tradition that we have continued ever since.

We had so much fun on that first holiday getaway to Chicago that I didn’t hesitate the following year to plan a trip to New York City for New Year’s Eve or the year after to plan a post-Christmas road trip to Montebello, Québec. Not long after that third trip it occurred to me that traveling was far better than unwrapping a lot of presents on Christmas morning and a plan began to form in my mind.

In the lead-up to Christmas in 2008, we decided to cut back on the number of gifts that we were buying for our family and to focus on a trip being our family gift. I thought that it would be fun to surprise Katie and Emma so I wrapped up clues to our destination for them to open on Christmas morning. The clues were a big hit, the girls were thrilled that we were returning to Chicago and since then our holiday trip has been a surprise gift that is opened on Christmas. 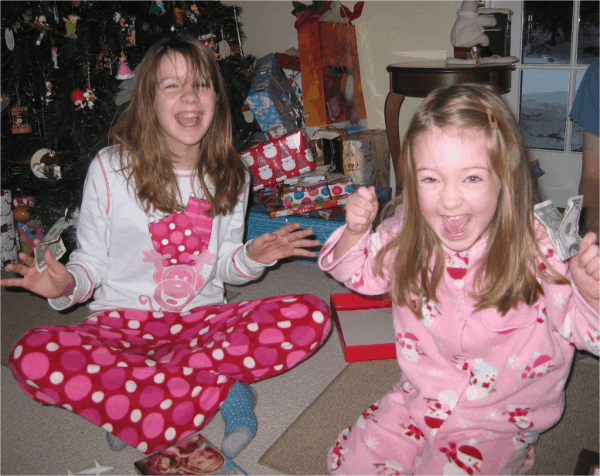 The reaction that I had been hoping for

Each passing year I become more frustrated with the commercialization of Christmas and try to cut back a little more on the buying in order to focus more on the travel experience that we will be having post-Christmas.  We’re not perfect – we still buy more than we need – but we do make a conscious effort at reduction year over year and the most anticipated present under the tree is the one that contains the gift of travel.

For anyone else who is growing tired of the excessive shopping that takes place at this time of year, I would recommend giving family members the gift of an experience this Christmas – whether it’s travel, a membership for the local museum, or a family trip to the zoo – it will be far more meaningful than anything that is for sale at the mall.

These photos represent a few of our holiday memories – far better than a soon-forgotten toy!

In 2005 we traveled to Chicago and visited favourites like the Shedd Aquarium and the Field Museum as well as American Girl Place where the girls posed with their dolls in front of this exquisite Christmas tree. At American Girl Place in Chicago

In 2006 we visited New York City for the first time and saw the magnificent Christmas tree in Rockefeller Plaza, shopped on 5th Avenue, attended a performance of Mary Poppins on Broadway and went for a carriage ride in Central Park. 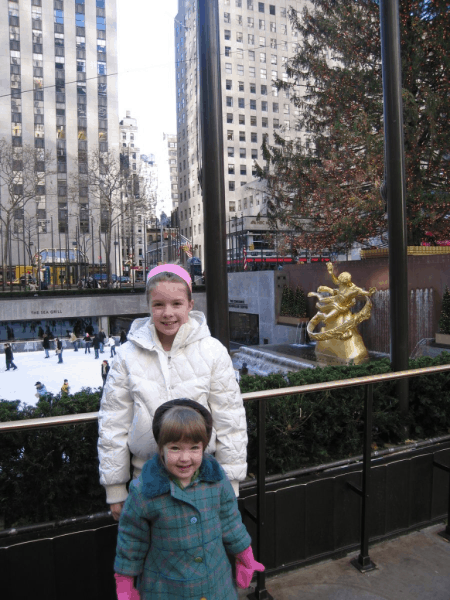 We stayed in Canada for the 2007 holidays and drove to Québec to spend a few days at Fairmont Le Château Montebello where we learned to cross-country ski, had a horse-drawn sleigh ride through the woods, went dogsledding and introduced the kids to the great Canadian sport of curling.  We spent New Year’s Eve in the nation’s capital, Ottawa, and watched fireworks near Parliament Hill at an early evening celebration. Checking out the ice sculpture at Fairmont Le Château Montebello

We returned to Chicago in 2008 – a city that we go back to again and again without ever tiring of it.  This time we visited Millennium Park to see our reflections in the Cloud Gate sculpture, browsed some famous works of art at The Art Institute of Chicago, and, believe it or not, managed to fit in yet another visit to American Girl Place. 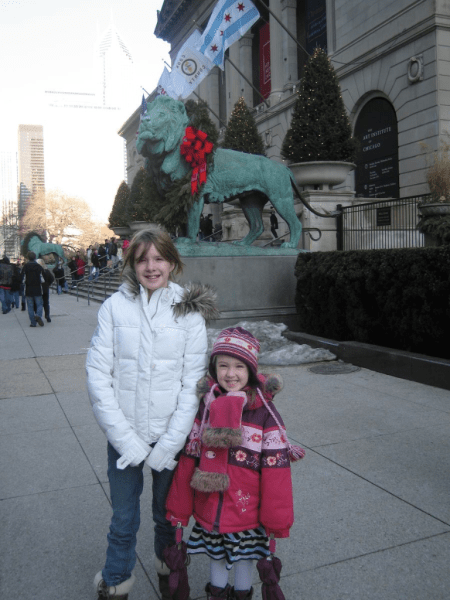 The Art Institute of Chicago

It was oh so cold when we flew to New York City for the 2009/10 holidays but we still had fun sightseeing, shopping, searching for Sacagawea at the American Museum of Natural History, and seeing Shrek and his pals on Broadway. 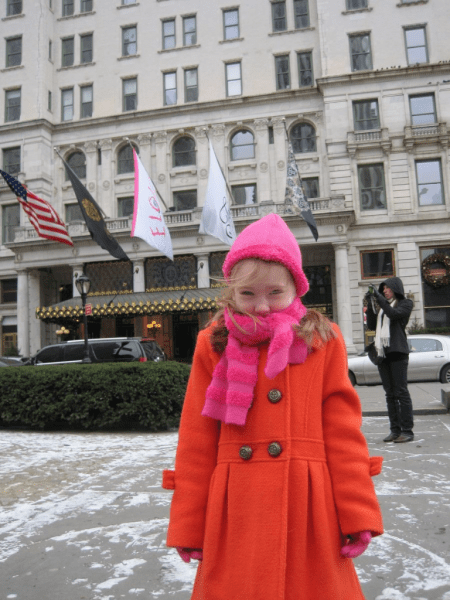 Outside The Plaza in NYC – it was really cold!!

For our 2010 holiday trip we headed west to sunny southern California and spent 6 nights in San Diego at the Hotel del Coronado where we enjoyed the break from a Canadian winter even though the natives thought that it was too cold to play on the beach.  Our visit seemed to fly by as we packed in visits to the San Diego Zoo, Legoland, Sea World, Balboa Park and even a day trip to Disneyland.  We had such an amazing time that a return trip to this beautiful coastal city is definitely in our future. On the beach at the Hotel del Coronado

Last year there was a fair bit of jumping up and down and squealing when the girls opened their Christmas present and pieced together the clues to discover that we were heading to Orlando for several nights.  Magic Kingdom, EPCOT, Hollywood Studios and Animal Kingdom were all decked out in their holiday finery and Universal’s Wizarding World of Harry Potter was nothing short of magical – a dream come true for both Katie and Emma.

Katie at The Wizarding World of Harry Potter

Of course, holiday 2012 is still TBA but the kids are going to think it’s awesome and, truth be told, I’m just a little excited myself!!  I’ll post a note on Facebook about what we are doing after the Christmas presents have been opened on the 25th.

Our 2012 holidays were spent aboard the Disney Magic sailing out of Galveston, Texas with stops in the Cayman Islands and Cozumel, Mexico. 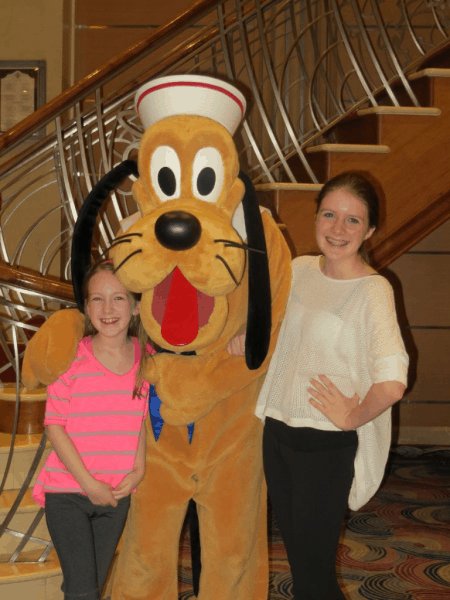 With Pluto on the Disney Magic

Our 2013 holiday trip was another cruise – this time on the Crown Princess out of Florida sailing to the Southern Caribbean with stops at the private island of Princess Cays, Aruba and Curaçao. 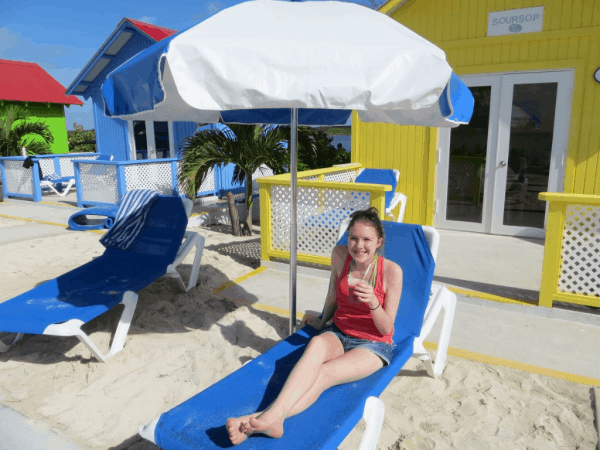 Plans are well underway for our 2014 trip which takes place in just over a month. Neither of my daughters need to be surprised any more so we now include them in the planning. This year we are returning to Montebello, Québec to spend a few days enjoying the Canadian winter at Château Montebello – hopefully there will be snow!

(Editor’s Update: All did not go according to plan on our Christmas vacation. A warm spell in the days leading up to Christmas melted all the snow and the grass was green when we arrived in Montebello. We spent a couple of days at the resort and then checked out early and headed to Ottawa to spend the remainder of our trip sightseeing in the nation’s capital instead.) 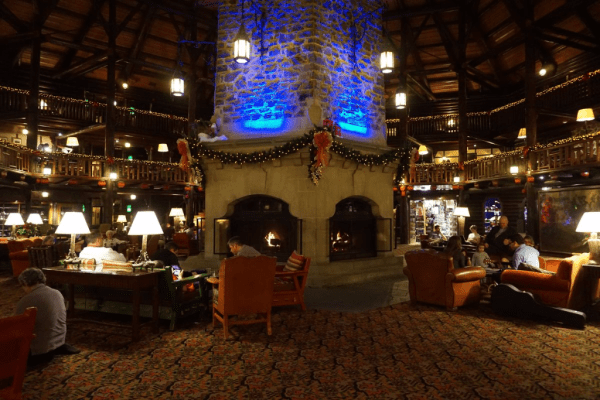 In 2015 we spent Christmas at Disney World in Orlando, Florida staying at the Grand Floridian and enjoying a magical Disney holiday. 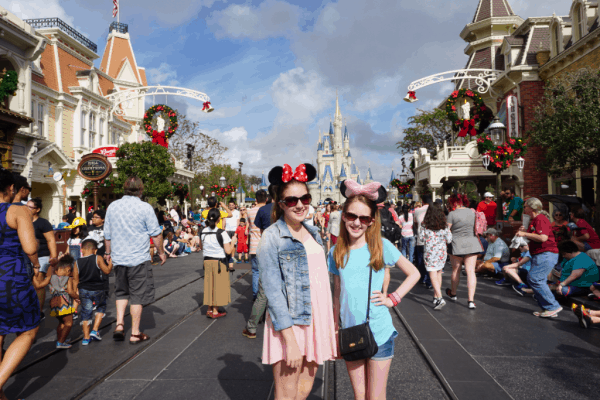 I celebrated a milestone birthday during the Christmas holidays in 2016 which we spent in San Francisco – I city that I had wanted to visit for year! Enjoying the holidays in San Francisco

In 2017 we had a difficult time deciding what we wanted to do for the holidays so made a last minute decision to fly to New York City for a few days to take in some Broadway shows and see the Radio City Rockettes Christmas Spectacular. 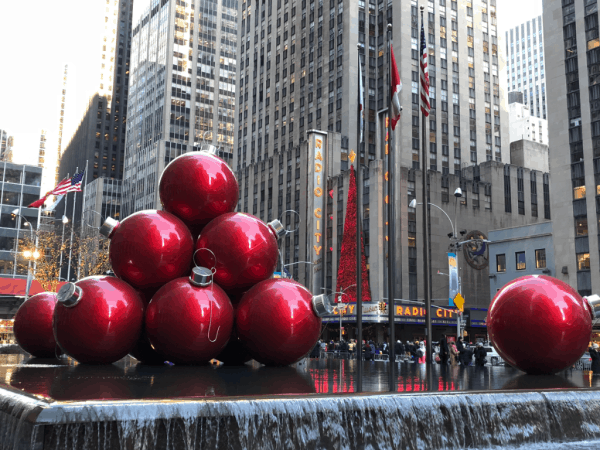