Visiting Downton Abbey: The Exhibition is a must for fans of the popular series.

On a trip to New York City over the holidays we were able to visit the North American premiere of Downton Abbey: The Exhibition sponsored by Viking Cruises. The multi-year international tour began in June 2017 in Singapore with the expectation that it would then travel throughout the U.S. in 2018 and beyond. The exhibition is currently in New York City for a limited engagement and will be travelling to other still-to-be-announced locations after it’s run in the city ends.

Update: Next stop for Downton Abbey: The Exhibition will be Biltmore House, Asheville, North Carolina through April 7, 2020.

Although I watch very little television Downton Abbey was my guilty pleasure so I was beyond excited to see this exhibition. Our 14 year-old daughter was with us and she found the exhibits quite interesting despite never having seen the show. She now wants me to watch the show again with her and I’m happy to oblige!

The exhibition is the ultimate experience for any fan of the series. If you loved Downton Abbey and have the opportunity then you must visit this exhibition – it will have you reliving all the ups and downs at Downton and longing for the return of the series. If you aren’t able to get to New York City before April then watch for updates on the website to learn where it will be heading next.

Downton Abbey is a British drama series that followed the lives of the aristocratic Crawley family and and their below-stairs staff on a fictional country estate in Yorkshire early in the 20th century. The first episode of the series created by Julian Fellowes aired in September 2010 in the UK (January 2011 in the U.S.) and ran for six seasons becoming a global phenomenon. The exhibition based on the hit television show transports visitors to post-Edwardian England and the world of Downton Abbey and the Crawley family.

Visitors to the exhibition purchase a timed entry but once inside are able to move through the exhibits at their leisure. There is a video introduction to watch first before continuing through the exhibition which is on three levels of the building. The first level is the Downton Abbey Servants’ Quarters, the second level is Crawley Family rooms and the third level has a display of costumes and information displays for each of the show’s main characters. The exhibition includes replicas of the sets from the series as well as costumes and props that appeared throughout the run of the show. The exhibition also makes good use of technology with video clips playing in many parts of the exhibition with scenes from the show and hologram greetings from cast members particularly Carson who acts as the host for your visit to Downton Abbey. 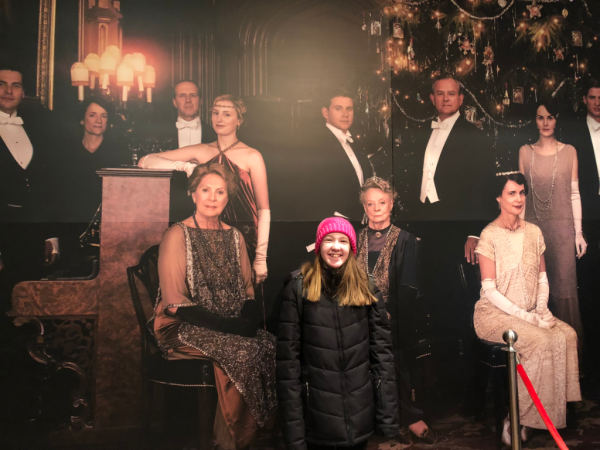 Emma in the lobby at the Downton Abbey Exhibition

The first level of the exhibition takes visitors downstairs with the servants of Downton Abbey where displays include videos, costumes and set pieces. The sets include Mrs. Patmore’s kitchen where you can visualize her and Daisy hard at work preparing meals, the servant’s dining area with the bell board, and Carson’s Pantry where he and Mrs. Hughes enjoyed many chats at the end of the day. An interactive quiz on a video monitor will determine what position you should apply for at Downton. My daughter discovered that she is best suited to apply for the position of Housemaid so I think she ought to start practicing at home! 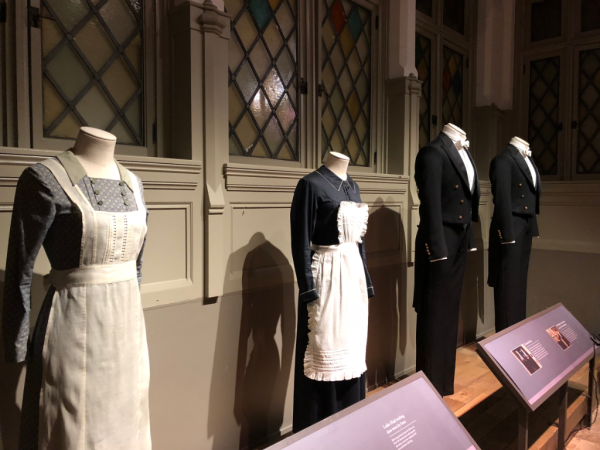 Servant’s costumes from the series 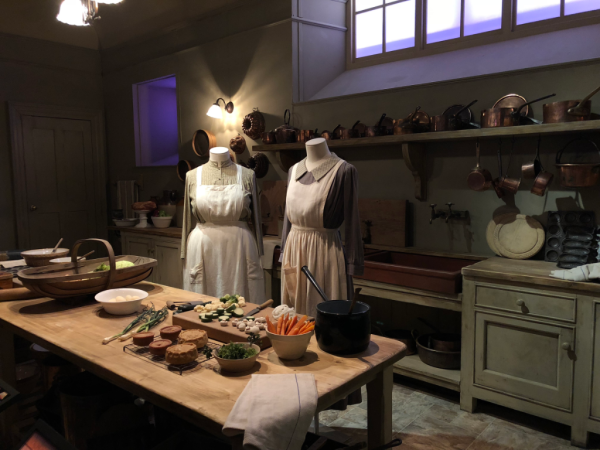 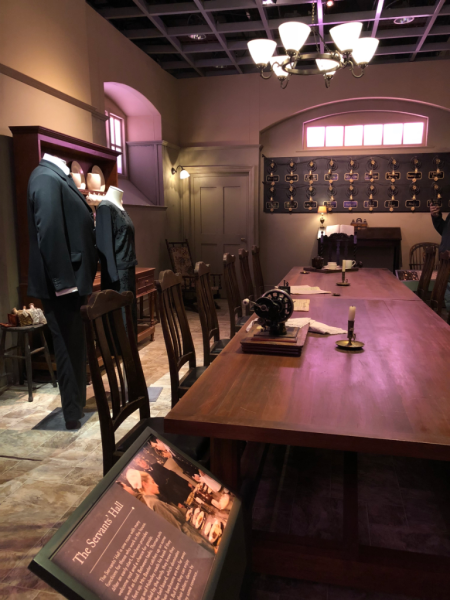 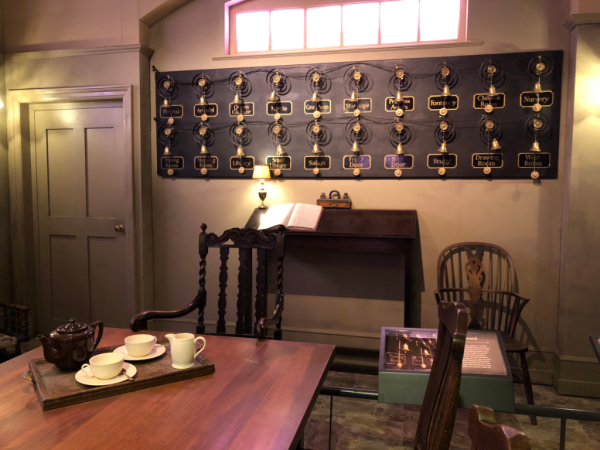 Costumes worn by Carson and Mrs. Hughes in Carson’s Pantry 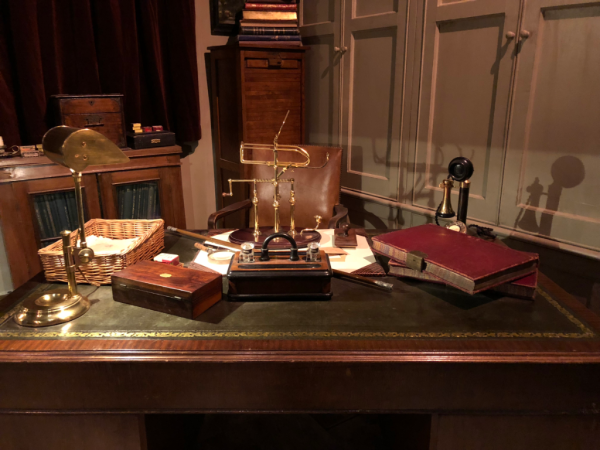 The second level of the exhibition is devoted to the Crawley family and includes a great number of costumes as well as replica sets of the dining room and Lady Mary’s bedroom. 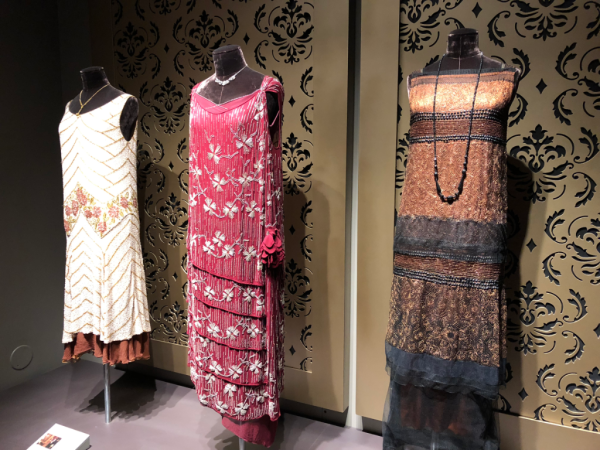 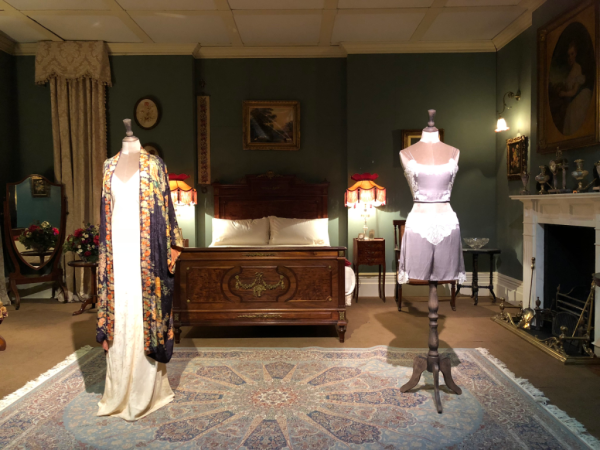 The third level of the exhibition is primarily about the many gorgeous costumes worn by the actors on Downton Abbey. Costumes for the exhibition were curated by Anna Robbins who was a costume designer for the series. This level has displays for all of the main characters with story boards and props and more than 50 costumes including the wedding gowns worn by Lady Mary and Lady Edith. 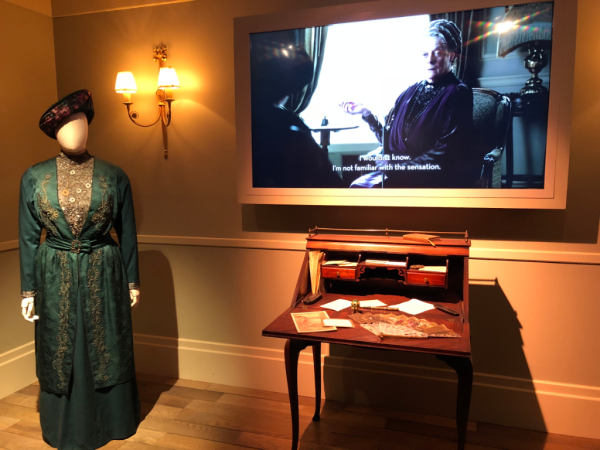 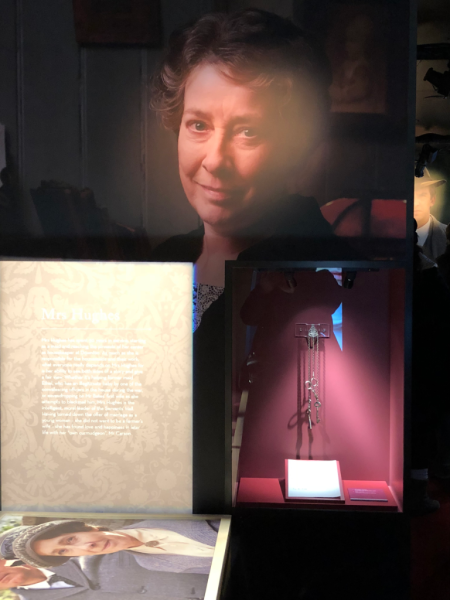 Story Board for Mrs. Hughes 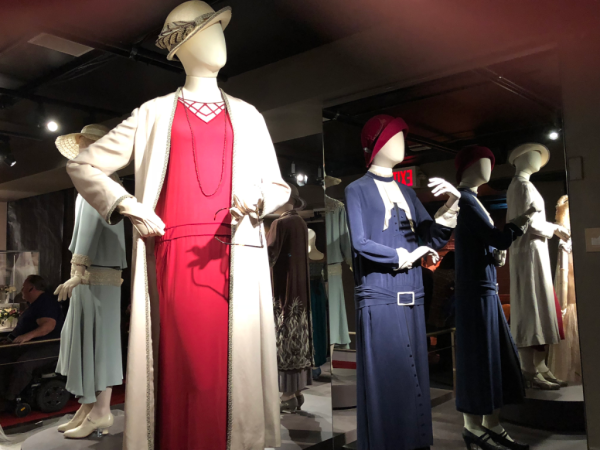 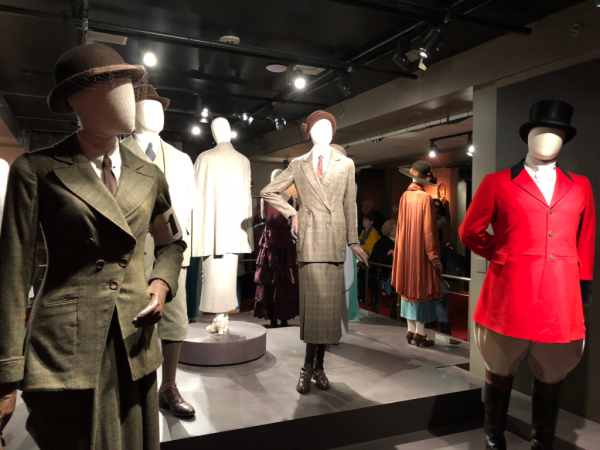 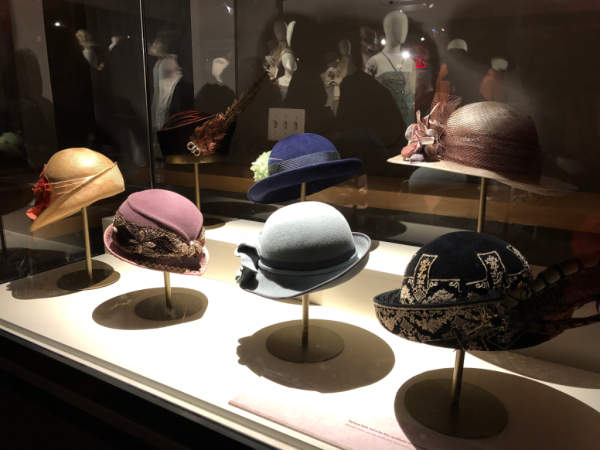 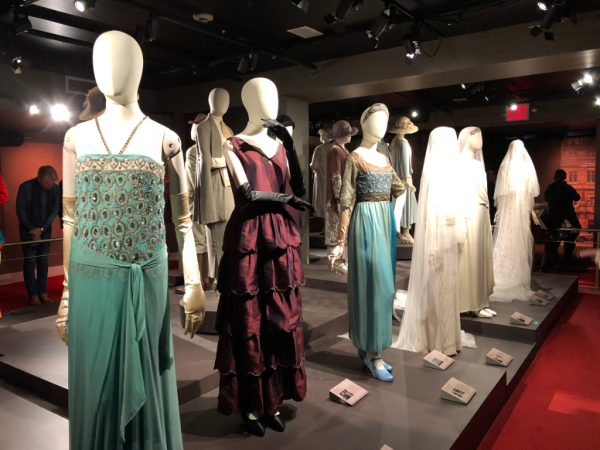 The exhibition finishes with Carson’s farewell: “Perhaps we’ll meet again. You never know.” and every fan leaves hoping that they will indeed.