One of the best day trips from Munich, Germany is a visit Neuschwanstein Castle and the surrounding area of the Bavarian Alps.

One of the best day trips from Munich, Germany is to the spectacular Neuschwanstein Castle which is quite possibly the most beautiful castle in Europe. Seeing Neuschwanstein in person has been on my travel bucket list since the very first time that I saw a photo of the castle so when we decided to travel to Munich, Salzburg and Vienna for our spring break this year I immediately started research to figure out how to fit a visit to Neuschwanstein Castle from Munich into a tight itinerary. 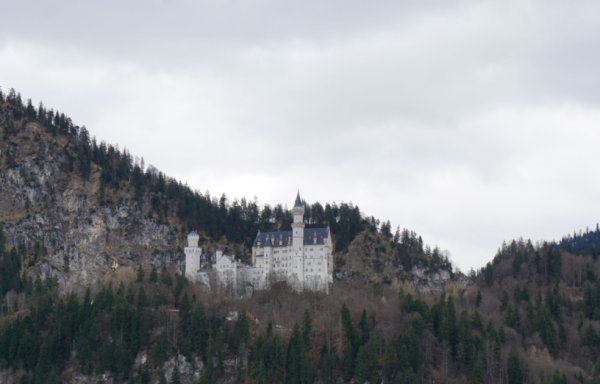 My first glimpse of Neuschwanstein Castle

Getting to Neuschwanstein Castle from Munich

Neuschwanstein Castle is located above the village of Hohenschwangau near Füssen in southwest Bavaria near the Austrian border. This is approximately 120 kilometres (75 miles) from Munich which makes it a great choice for a day trip from the city. If you are staying in Munich, there are several options to get to Neuschwanstein Castle which include renting a car and driving there yourself, taking the train, booking an organized group tour or booking a private tour with a driver/guide.

gives you the flexibility to stop whenever you want to and do some additional sightseeing in Bavaria as well. AutoEurope has available a free E-Book: “Renting a car in Europe”

which includes information on everything you need to know about finding, booking, and driving a car rental in Europe. Directions can be found on the visitor website for Neuschwanstein Castle.

Public Transportation – Travelling from Munich to Neuschwanstein Castle via public transportation seems reasonably easy and would be the most economical way to travel. The downside, however, is that it will take the better part of the day to travel there and back and it wouldn’t be possible to visit anywhere else enroute. This option involves a two hour train ride from Munich to Füssen followed by a bus trip to the village of Hohenschwangau. You can find detailed directions on the Man in Seat 61 website.

Private Tour – We chose to book a private tour with Mike’s Bike’s Tours. The company is known for organized bike tours in and around Munich and is highly rated as #1 Sightseeing Tours Munich on TripAdvisor but they also offer additional guided tours. We opted for a full day private tour as we didn’t want to rent a car and drive ourselves and decided that a private tour would be more efficient than taking public transportation. By hiring a local guide we had the benefit of his expertise and were able to see far more of the countryside of the Bavarian Alps than we ever could have managed on our own in one day.

Our driver/guide, Siegmund, picked us up in our hotel lobby at 7:45 am and we set out for our full day of sightseeing in Bavaria.

Our first stop of the day was the Bavarian resort town of Garmisch-Partenkirchen which is approximately an hour’s drive from Munich depending on traffic. Garmisch-Partenkirchen was formed when the two towns of Garmisch and Partenkirchen were united in 1935 prior to hosting the 1936 Winter Olympics. The International Olympic Committee was reluctant to approve a smaller town as host so the two alpine towns were ordered to amalgamate so that Germany would be selected as the host country.

Germany’s highest mountain Zugspitze is nearby and the area is popular for skiing in the winter and hiking in the summer months. We weren’t here long – just long enough to take a few photos by a picturesque alpine lake, enjoy a quick walk around Garmisch and stop at a cafe to buy coffee and snacks for the drive. Garmisch-Partenkirchen is such a pretty town with the mountain peaks looming behind the old town, the unique mural-painted buildings and the stunning St. Martin’s Parish Church – a town I would love to spend more time in. 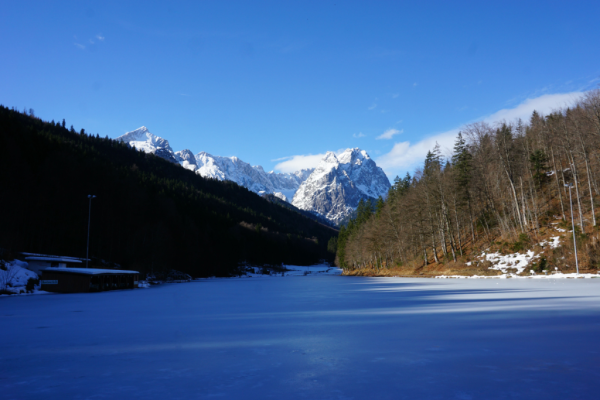 Building with painted murals in Garmisch-Partenkirchen 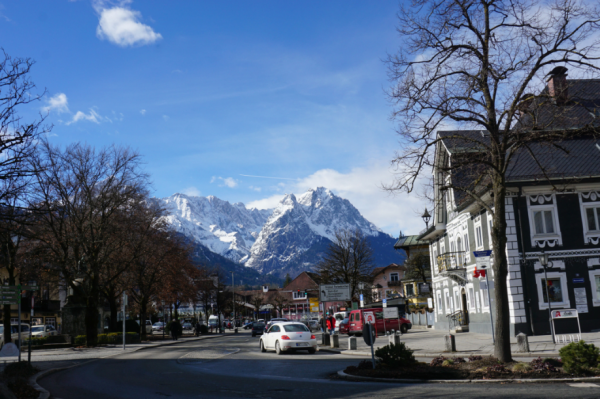 Our next stop was the village of Ettal, a distance of about 15 kilometres from Garmisch-Partenkirchen, to visit the Ettal Monastery. This Benedictine abbey was founded in 1330 by Emperor Ludwig of Bavaria and construction was completed in 1370. The church and abbey were destroyed by fire in 1744 and completely redesigned and rebuilt. The beautiful Baroque style building that stands here today is from that period of reconstruction. The operations run by the monastery today include a hotel, a brewery and a liqueur manufacturing business. I had not come across Ettal Monastery when doing research for our trip so we never would have considered visiting if we hadn’t been with a tour guide who was familiar with the area – just one more benefit of spending time with an experienced local guide. 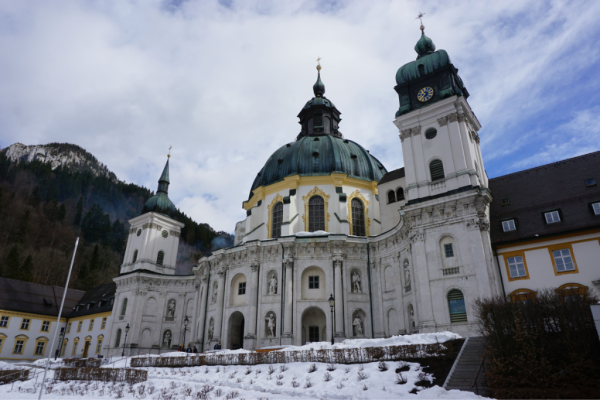 Exterior of the Ettal Monastery Interior of the Ettal Monastery 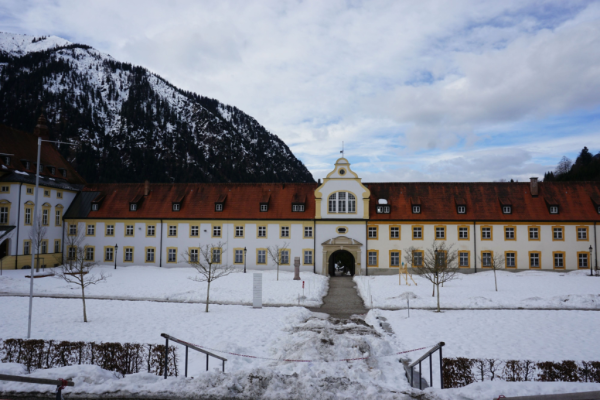 Linderhof Palace (Schloss Linderhof) is one of three castles built by King Ludwig II of Bavaria (known as “Mad” King Ludwig) who ruled from 1864 until his death in 1886. Schloss Linderhof, which had previously been a hunting lodge, is much smaller than both Schloss Neuschwanstein and Schloss Herrenchiemsee and is the only one of the palaces that he lived to see completed. The palace is modeled after Versailles and also has beautiful gardens.

The reclusive King Ludwig who ascended to the throne at the age of 18 became obsessed with building his fairy-tale palaces and racked up enormous debts on the construction. The Bavarian government became increasingly concerned that he wasn’t fulfilling his duties as king and had him declared insane. He died under suspicious circumstances just days after being declared to be “mad” and deposed from the throne. King Ludwig’s palaces became the property of the State of Bavaria and all operate as popular tourist attractions.

We opted not to tour the interior of the palace so that we would have time for other stops and, unfortunately, since we were visiting mid-March there was still snow on the ground and the gardens were closed. We just took a few photos outside and then hopped back in the car for a drive through the Austrian Alps before heading to Neuschwanstein Castle. I have seen so many beautiful photos of these gardens though that I plan to return for a summer visit to see them for myself.

(My friend Mary from The World is a Book has a lovely post on Exploring Linderhof Palace Park where you can enjoy her beautiful photos of the gardens in the summer.) 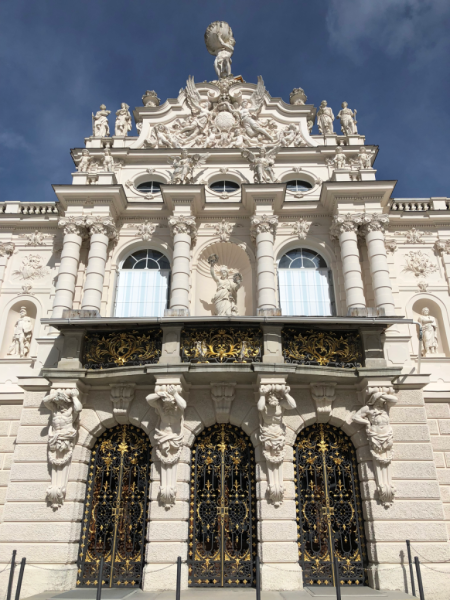 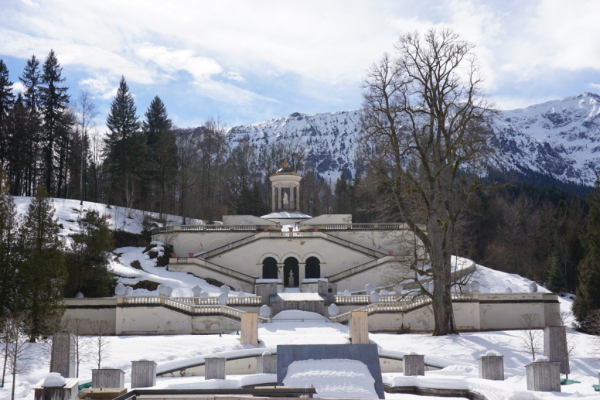 As part of our tour we went for a drive through a section of the Austrian Alps and stopped to take a photo by an Alpine lake. The scenery was stunning and I would love to return here during the summer months to see what the area looks like when the snow has melted. A lake in the Austrian Alps

The final stop of our day was the much-anticipated visit to Neuschwanstein Castle which “Mad” King Ludwig started building in 1869. Chances are that the castle looks familiar to you because it is said to have served as Walt Disney’s inspiration for Sleeping Beauty’s Castle at Disneyland in California and it’s one of the most popular tourist attractions in Germany and in Europe as well with somewhere in the neighbourhood of 1.5 million annual visitors.

Ludwig chose the magnificent hilltop location overlooking the Hohenschwangau valley for the castle that he wanted to build “in the authentic style of the old German knights’ castles”. Construction began in 1869 and was originally expected to last only three years but Ludwig wanted everything in his castle to be perfect and it had not yet been finished when he died in 1886. Just a few weeks later the castle was opened to the public – ironic given that the very private Ludwig would have been appalled at the thought of the public traipsing through his masterpiece.

We arrived in the afternoon and commenced our walk uphill to the castle from the village which takes about 30-40 minutes. Horse-drawn carriages and shuttle buses are also an option for getting to the top of the hill. It is only possible to tour the interior of the castle on a guided tour and it’s a good idea to book the tours in advance as they do sell out particularly when travelling during the high season. Our timed-entry tickets had been arranged by our guide and picked up when we arrived so we hadn’t had to worry about that at all. Once we arrived at the castle we still had about 20-30 minutes to look around before joining the queue for our entry time. Guided tours are available in English and German and audio guides are available in a number of additional languages. Photography inside the castle is strictly forbidden. (Current details regarding visits to the castle can be found on the Neuschwanstein website.)

The best photos of the castle are taken from Mary’s Bridge (Marienbrücke), but unfortunately, it was closed when we arrived. One of the downsides of visiting Neuschwanstein during the winter season is that the bridge may close at anytime due to ice and snow or slippery conditions. The bridge reopened around the time we were about to leave to head back to Munich but we needed to get going. I was disappointed not to have experienced that iconic view of the castle so visiting in the summer is now on my travel wish list for that reason alone (I need that photo!!).

Seeing the castle in person was a dream come true but, honestly, the exterior of the castle is the best part. We have visited quite a few castles (four on this trip alone!) and I wasn’t all that impressed with the tour of Neuschwanstein particularly since it is limited to just 35 minutes. As a first-time visitor to the area, there was no way that I would have skipped a tour of the interior of the castle, however, on a return trip, I would just take photos outside the castle and skip the tour. Neuschwanstein Castle from a distance We loved our day exploring the Bavarian Alps and by the time we were driving back to Munich, I was convinced that I want to return to explore more of this region of Germany. If you’re planning a tour of any sort in Munich or the Bavarian Alps then we highly recommend Mike’s Bike Tours.

Salzburg, Austria for Fans of The Sound of Music

The Best Things To Do in Munich in One Day