Highlights of a day spent in the port of Santorini while on a family Mediterranean cruise aboard the Celebrity Equinox.

This past summer (August 2011) our family cruised the Eastern Mediterranean with Celebrity Cruises.  We sailed from Civitavecchia, Italy and our first port of call was Santorini in the Cyclades chain of Greek islands.  The crescent shaped island of Santorini is generally considered to be one of the most beautiful islands in the Aegean Sea.  The cliffs of Santorini form the rim of a still-active volcano and ships anchor in the caldera of that volcano.  The crescent shape of the island is the result of a volcanic explosion around 1500BC which caused part of the island to collapse into the sea.  According to legend, the portion of the island which disappeared in the explosion may have been the mythological lost city of Atlantis.  There may not be any scientific or historic basis for this conclusion but it may very well be the hook you need to get your kids interested in Santorini.  The best known village on the island is the beautiful village of Oia (also spelled Ia) which is renowned for it’s sunsets.

I had a very difficult time deciding what our family was going to do while we were in Santorini.  Our ship was scheduled to arrive in Santorini in the middle of the afternoon (1:30-2:30pm) and would be anchored until 10pm.  Passengers booked on Celebrity shore excursions would be tendered first at the port of Athinios before the Equinox moved to the port of Skala Fira where the remaining passengers would tender to shore.  Passengers tendering in Fira would then have to take the cable cars, ride a donkey or walk up the cliff to the village of Fira located 1000 feet above the sea.  We prefer to sight see independently, however, due to the schedule and timing we eventually decided to book an excursion with Celebrity so that we could disembark with the first groups of tenders.  Seeing the village of Oia with it’s whitewashed buildings and blue domed churches was a priority for me and I didn’t think that it would be possible to see it on our own without keeping Emma (who had just turned 8) out too late.  We had an early morning start scheduled for the next day in Athens so this seemed like the best option for seeing what we wanted and still getting back to the ship at a reasonable time.

We were among the first passengers on the tenders from the ship and we boarded our bus for the scenic drive up the narrow road to the top of the cliff where the villages are perched.  The view is stunning as long as you don’t think too much about the fact that you’re traveling up a narrow cliff-side road on a bus that has difficulty making the turn at each switchback.  Katie’s a bit afraid of heights so she sat on the inside and refused to look out the window most of the way up.  Our guide provided interesting commentary about the history and geology of the island during our drive.  An interesting fact is that volcanic soil is exceptionally fertile so, despite the desert climate, Santorini is well-known for the quality of some of its agricultural products.  Our first stop was at Santo Wines for a tasting and an opportunity to purchase some Greek wine.  We had no interest in the wine tasting so we walked around the lovely property and enjoyed the magnificent view of the sea and of our ship anchored in the caldera.  We did enjoy the yummy snack that the winery provided – tomatoes, olives, and cheese. 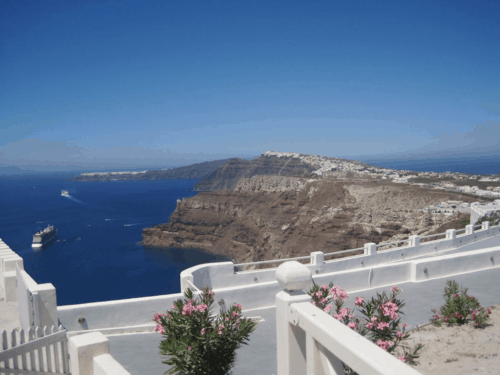 View of the caldera from outside winery

Once everyone had re-boarded the bus we drove to the village of Oia where we had an hour of free time to explore.  Oia is located at the northern tip of the island and is the most photographed village in the Aegean.  An hour wasn’t anywhere near enough time to explore this beautiful village – I could have happily spent a day here exploring the shops and taking photos.  As we arrived in Oia we were greeted by vendors welcoming us to their village and holding out bags of roasted nuts for us to sample.  We managed to fit in a bit of shopping to buy postcards, bracelets to ward off the evil eye, and a bag of delicious nuts (I think they were sesame covered pistachios but not entirely certain).  Oia is everything that you ever imagined a Greek island to be.  The pictures that you have seen of the white buildings with blue domes and the blue sea in the background – Oia.  Oia provided a perfect backdrop for me to take photos of my beautiful daughters and, for the most part, they posed happily for me. Emma outside church in Oia 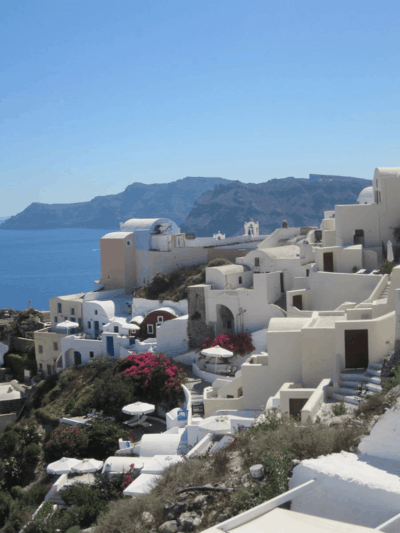 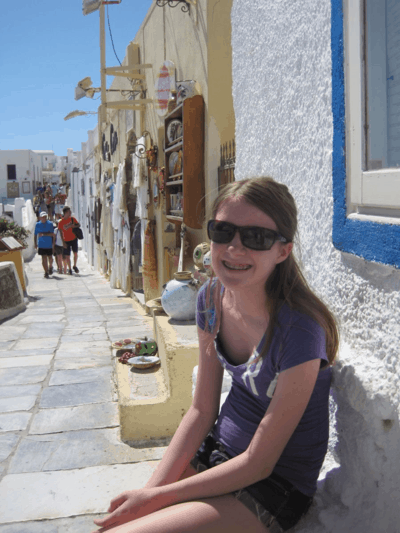 Emma enjoying the views in Oia We re-boarded the not very well-air-conditioned bus for the drive to Fira where our tour ended.  We were provided with a ticket for the cable cars so that we could return to the ship at our leisure.  Fira is a pretty village as well, however, it seems much bigger and more commercial than Oia.  If there had been more time for exploring we probably would have enjoyed it more, however, what we saw as we walked to the cable car station was mostly shops selling jewelry.  We were, for the most part, happy with our shore excursion although I could have done without the visit to the winery and I would have preferred more time in Oia.  Primarily this excursion served as a form of transportation as we mostly had free time, rather than having to follow a tour guide around, and this suited our purposes just fine.

By the time we walked from the bus to the central part of Fira everyone was really hot and the mood was rapidly deteriorating so the first order of business was to find some ice cream to cool down.  Just a few steps from where our guide left us we found a stylish little gelato/ice cream shop (which advertised itself as “The Best Ice Cream in Greece”).  Emma discovered that she loved caramel flavoured ice cream and agreed that it was definitely the best (bearing in mind that it was also the first ice cream that she had in Greece). After the ice cream break we walked and shopped a little as we headed in the general direction of the  cable cars.  We thought perhaps we would make it back to the ship in time for dinner but the line up for the cable cars was already very long and we ended up waiting in it for about 1.5 hours.  It’s very important to allow for lengthy waits for the cable car when planning a return to the ship in Santorini.  When we were approaching the loading area of the cable cars a scuffle broke out at the front of the line as four individuals skipped the entire queue and were trying to force their way in at the front.  Shouting in various languages ensued as the people at the front of the line tried to shame the queue jumpers and prevent them from cutting in.  Their excuse was that they were going to miss their ship if they waited in line and in the end they did force their way into the line despite the lack of sympathy from any of the people who had been waiting in line for so long. The Equinox anchored in the caldera

As we waited in line we periodically saw the donkeys who were making the trip up and down the cliff side stairs pass by.  They seemed a bit erratic which served to reassure me that I had made the correct decision in opting to take the bus up and the cable car down the cliff.  Walking down would have been an option as well but, from what I read ahead of time, not a particularly attractive one as the stairs are steep and covered in donkey droppings.  We spoke to fellow passengers later who had walked down the stairs and said that they had underestimated how difficult the walk down the slippery steps would be with the sun beating down on them and having to avoid the donkeys who veer all over the pathway. 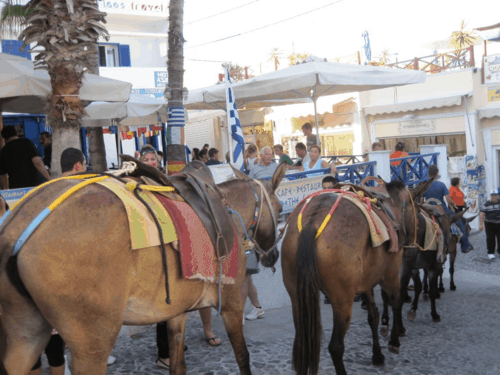 The donkeys of Santorini

We made it back to the ship around 7pm so we just had a casual dinner and a swim before getting to bed to get some rest prior to the early morning arrival in Athens the next day. 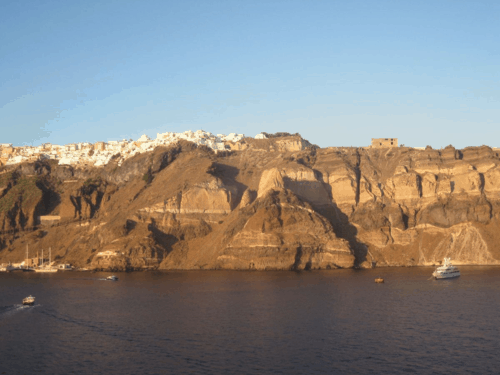 View of Fira from the ship

While Emma played in the pool with her friends I watched the sunset over Santorini.  Perhaps it isn’t as beautiful in Fira as it is in Oia – but it was quite lovely in its own right and I was satisfied with it all the same. 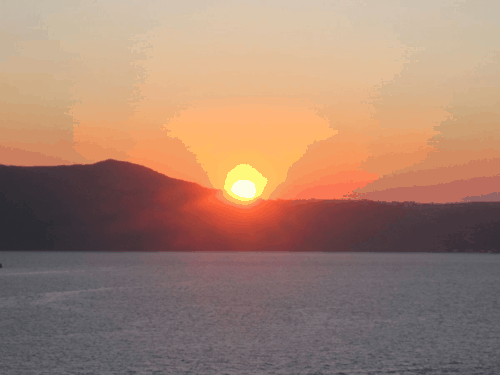 We enjoyed our day in Santorini even though it was rushed and brutally hot.  I would have loved to have spent more time in Oia but that wasn’t to be on this particular trip.  Perhaps I’ll make it back to Santorini some day to enjoy the black sand beaches, wander the pretty villages and watch the sunset over Oia.