A walk in New York City’s Central Park – things for families to see and do when visiting Central Park in springtime with kids.

I finally had the opportunity to explore Central Park on a recent weekend in New York City. This was my fourth visit to the city but previous trips had taken place in the winter when the weather was miserable and cold and that had discouraged us from seeing the park on foot. This time we visited on the first weekend of April and were treated to lovely spring weather.

Central Park was the first major landscaped urban park in the United States when it was designed in the 19th century and the 843 acre park is now a National Historic Landmark and one of the premier public urban parks in the world. We spent a couple of hours walking around the south end of the park moving at a fair pace because we knew we didn’t have much time and wanted to cover as much ground as possible.

We stayed at the J.W. Marriott Essex House located on Central Park South so we had easy access to the park and headed there directly from breakfast on Saturday morning.

Outside entrance to Central Park

One of our first stops was near the Wollman Skating Rink where we were surprised to see skaters on a pleasant spring morning in early April. We have had an unseasonably cool spring at home so Emma was quite excited to see robins in the park. A spring robin in Central Park

We decided to see the park on foot but these carriage rides did look like quite a bit of fun. We went on one on our first trip to New York more than six years ago but Emma couldn’t remember it. Another sign of spring that we haven’t seen at home yet – daffodils blooming everywhere. We stopped at the Dairy Visitor Center & Gift Shop which is housed in a historic Victorian building in order to purchase a map of the park ($4). The Visitor Centers and the Gift Shop are operated by the Central Park Conservancy which is a private, not-for-profit organization whose mission is “to restore, manage, and enhance Central Park in partnership with the public”. 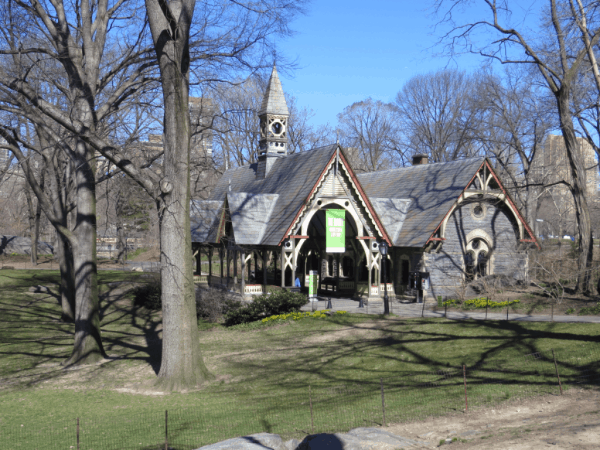 One of my favourite areas of the park was The Mall and Literary Walk where the tree-lined pedestrian pathway reminded me of parks in Paris. At the south end of the mall is the Literary Walk where there are statues of four famous writers (William Shakespeare, Robert Burns, Sir Walter Scott, and Fitz-Greene Halleck) plus Christopher Columbus. 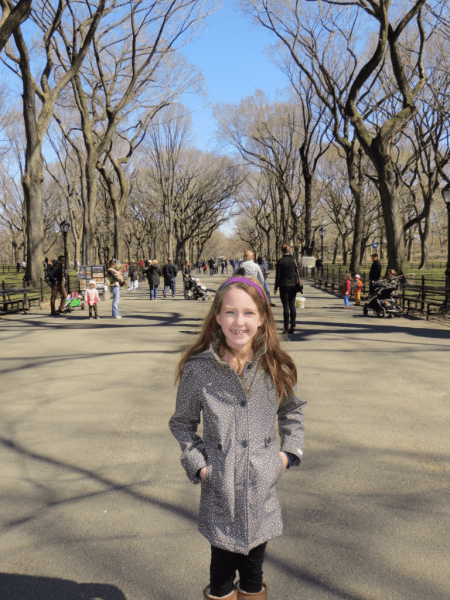 Walking on The Mall in Central Park 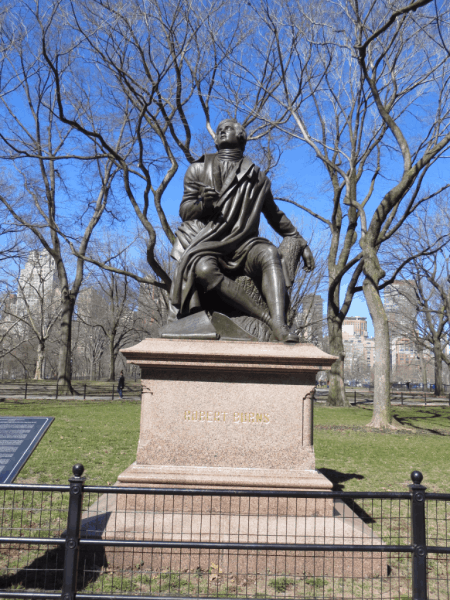 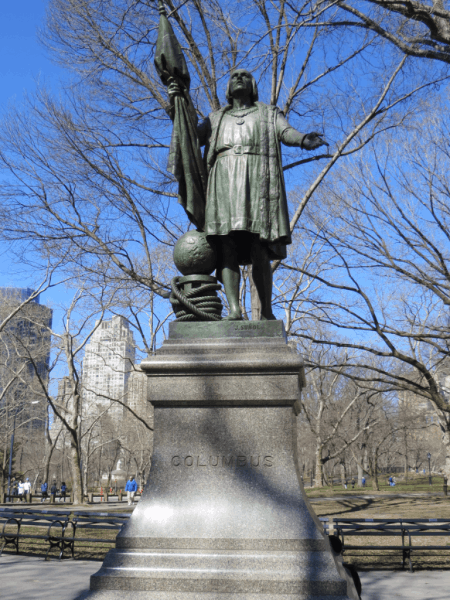 Statue of Columbus in Central Park

While making our way from The Mall to the Conservatory Water we discovered this statue of the sled dog Balto who was made famous in print and on screen for delivering diphtheria serum in Alaska in 1925. The popular statue was unveiled in Central Park in 1925. We also enjoyed walking in the quiet area around the Conservatory Water – the sailboats reminded us of the Stuart Little movie and are also reminiscent of sailing ponds in Parisian parks. Sailing boats in Central Park at the Conservatory Water 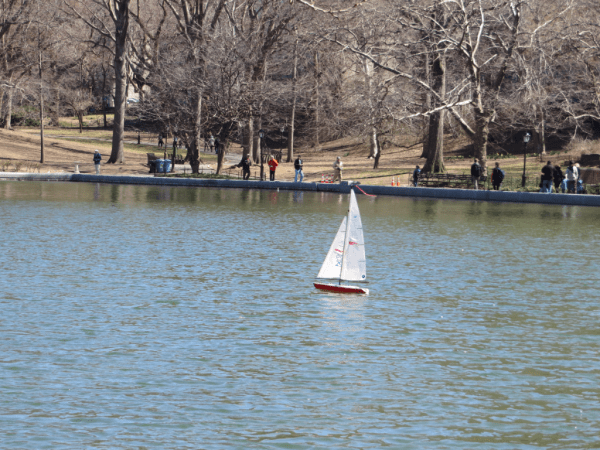 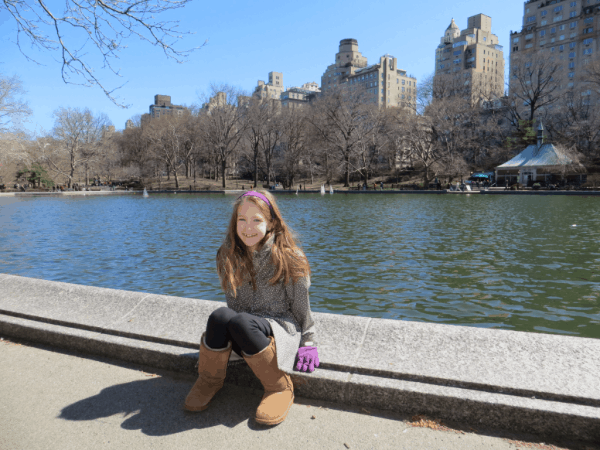 At the Conservatory Water in Central Park

Near the Conservatory Water is Central Park’s tribute to Hans Christian Andersen which was erected in 1956 to commemorate the author’s 150th birthday. Kids love to climb on the bronze statue which depicts Andersen reading from his book The Ugly Duckling. During the summer months, storytelling takes place at the foot of the statue. Another statue that is very popular with kids is the 11 foot tall bronze of Alice in Wonderland which appears to be as much fun to climb on as any playground structure. I was talking to the mother of a young girl who said that they visit every weekend and her daughter insists each and every time that they take a photo with Alice, the Mad Hatter, the White Rabbit and friends. Playing at the Alice in Wonderland statue From there we walked toward the Loeb Boathouse where boats can be rented to row on The Central Park Lake. The 18 acre Lake is the second-largest man-made body of water in the park. 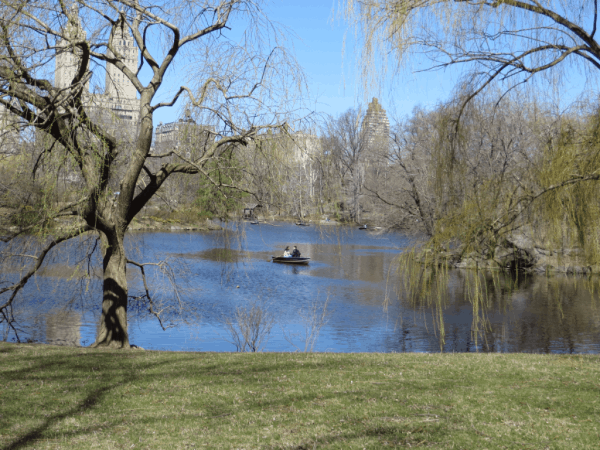 Boating on the lake in Central Park

The beautiful 26 foot high Bethesda Fountain which is the focal point of Bethesda Terrace was commissioned as part of the original design of Central Park and dedicated in 1873. The sculpture is called Angel of Waters and was designed by Emma Stebbins who became the first woman to receive a commission for a major work of art in the city of New York. 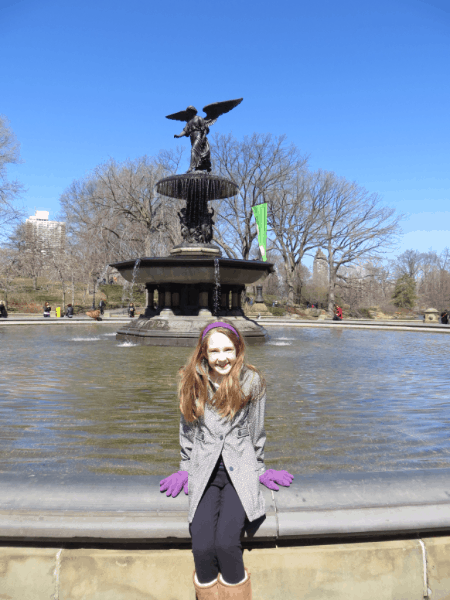 From Bethesda Terrace, we headed across the park toward the west boundary. 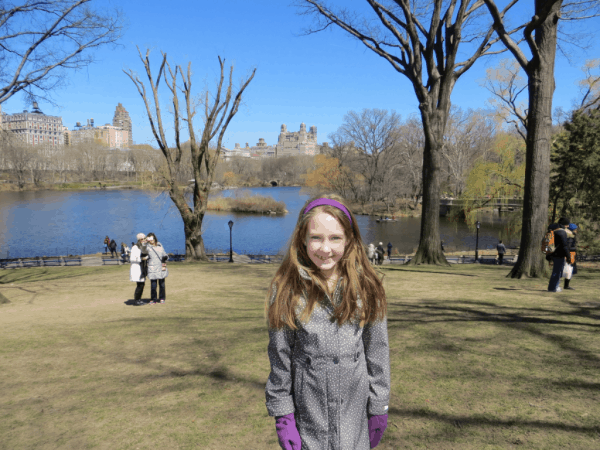 Finishing up our walk in Central Park

We completed our walk near Central Park West at Strawberry Fields which was created as a tribute to John Lennon and named for the Beatles’ song Strawberry Fields Forever. Lennon was murdered in 1980 outside his apartment located adjacent to the park. The black and white Imagine Mosaic draws visitors who want to pay homage to Lennon and quietly contemplate a world without conflict. 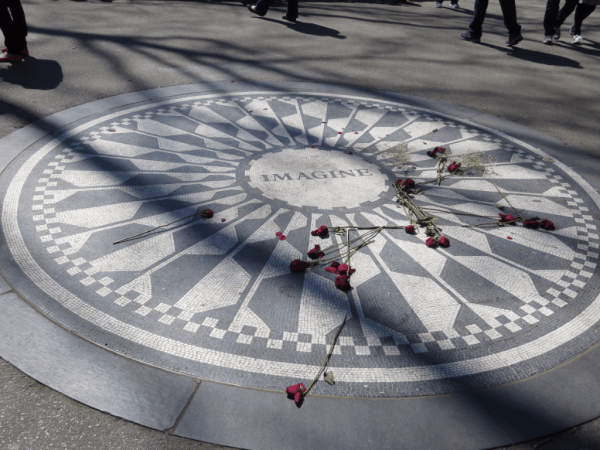 My Goldilocks Weekend at the J.W. Marriott Essex House 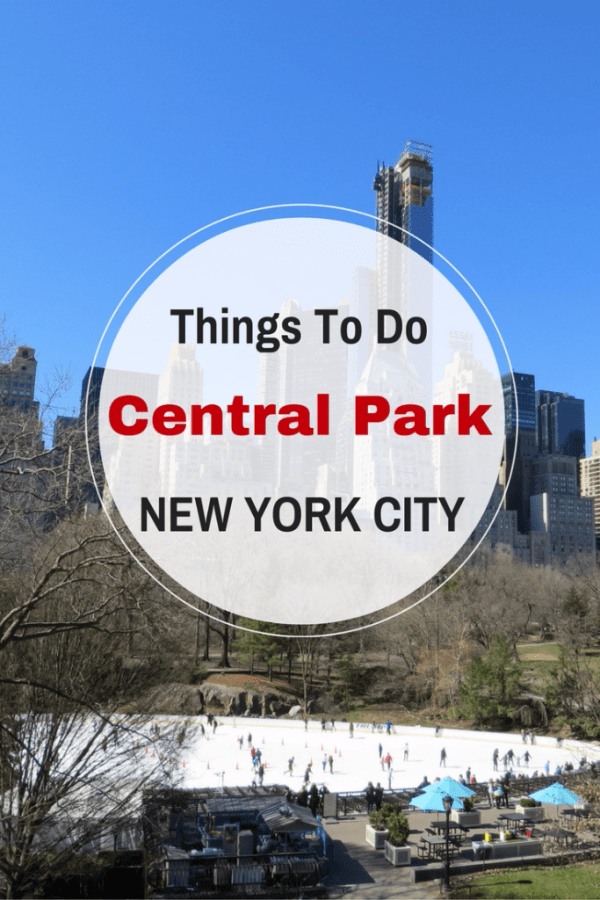