Things to see and do in Rome with kids. Our pre-cruise time in Rome was limited to 2.5 days so we had to be very efficient in order to see the highlights in this short period of time.

Prior to our Mediterranean cruise we had 2.5 days to explore Rome with kids. We knew that the first day would be a bit of a write-off due to jet lag so we needed a solid plan to see as much as possible the following two days before departing for Civitavecchia to board the Celebrity Equinox.

Rome is a city in which one could happily spend days, soaking up the history and the culture and pausing often to sample the food. Unfortunately, we didn’t have the luxury of time so we had to be efficient and laser-focused on the highlights. Our game plan was to tour the Vatican one day, Ancient Rome on the second day and spend the balance of the time just wandering the city and enjoying la dolce vita.

Since we had such a limited amount of time available, we opted for a centrally-located hotel in order not to waste precious time commuting to the attractions we wanted to visit. We chose Albergo Santa Chiara, in the historic centre of Rome near the Pantheon, and were able to walk nearly everywhere. The lovely view from our terrace was a bonus. 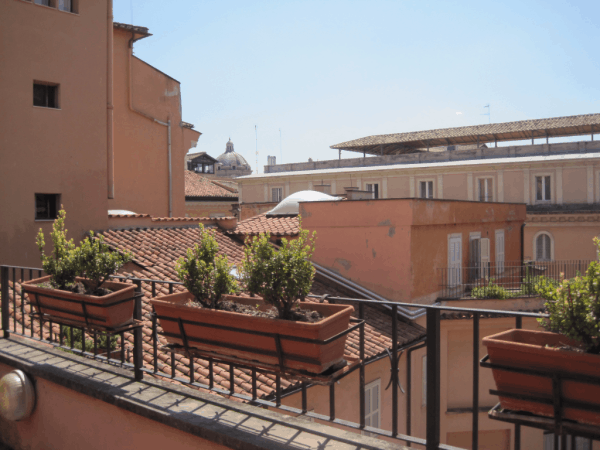 The terrace of our apartment at Albergo Santa Chiara

Our hotel was steps from the Pantheon, a pagan temple which is the best-preserved temple from Ancient Rome, so we headed there after dropping off our bags the morning of our arrival.

The Pantheon is a circular building with a domed roof that is the largest un-reinforced concrete dome ever to be built and was the inspiration for other domes such as the one on St. Peter’s Basilica. There is an opening called an oculus inside the dome and the height to it is precisely the same as the diameter of the dome making it a perfectly proportioned building. This fact may amaze modern-day engineers and architects but my jet-lagged daughters were not particularly impressed. The Pantheon was just part of our neighbourhood

It took play-time in the Piazza Navona and an early dinner of pizza to improve the mood. We called it a day quite early and headed back to our hotel to get some much-needed sleep. 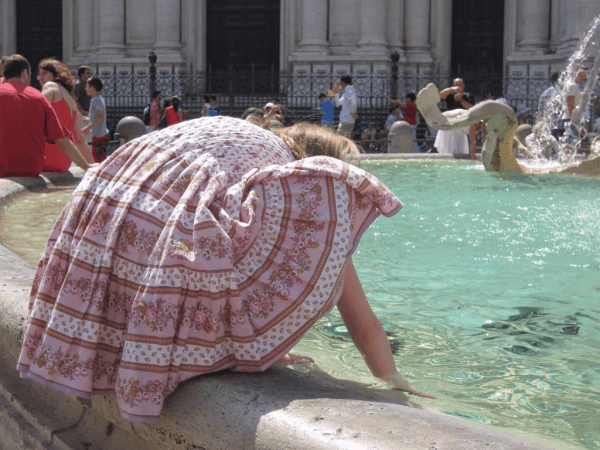 Playing in a fountain in Rome

Day One – The Vatican Tour

The focus for our first full-day in Rome was a tour of the Vatican Museums which we had booked with Context Travel. We weren’t meeting our tour guide at the Vatican until mid-afternoon so we had time for both some exploration and some gelato beforehand.

Our first stop was the Trevi Fountain which everyone recognizes from the movies. It was mid-morning by the time we arrived at the Roman landmark so the area around the fountain was already teeming with people. Each of us was able to toss a coin into the fountain though so we are assured of a return visit. We walked from the Trevi Fountain to Piazza di Spagna and the Spanish Steps which were constructed in 1725 and named for the Spanish Embassy to the Holy See which was located on the site. The steps are a popular gathering place in the city but it’s necessary to climb the wide, curving staircase to the top for the great views. My younger daughter counted 138 steps – more or less. As there were a few complaints of heat and exhaustion, we hopped in a cab to the Vatican Museums (the only time that we didn’t walk to and from our destination while in Rome) and discovered a gelato shop conveniently located near the entrance.

We had booked Context Travel’s three hour family tour of the Vatican Museums which is designed to introduce children to art, history and architecture. Our guide, Daniela, was an art historian who impressed me both with her knowledge of the Vatican and her ability to engage the kids and maintain their interest for the duration of the tour. Having an expert guide explain the history of the Vatican and the artwork enhanced the experience for all of us. A beautiful afternoon in the Vatican Courtyard

Our tour concluded with Michelangelo’s breathtaking masterpiece, the Sistine Chapel, and we then explored St. Peter’s Basilica and St. Peter’s Square on our own.

Our second and final full day in Rome had been set aside for visiting the Colosseum and the Forum. Unfortunately, we didn’t get as early a start as we had intended (it happens sometimes when traveling with a teenager) and it was nearly mid-day and extremely hot before we arrived at the Colosseum after walking from our hotel. 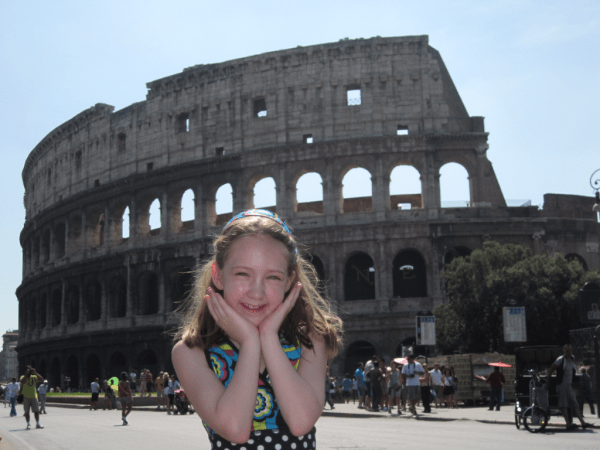 Arriving at the Colosseum

We had decided that we didn’t need to book a private tour of the Colosseum and the Forum and then made the mistake of not booking our entrance tickets ahead of time. By the time of our late-morning arrival, the line-ups were intimidating in their length and the August sun was beating down.

We made the further mistake of signing up for one of the tours being offered outside the Colosseum and were led to believe that a tour of both the Colosseum and the Forum would take a couple of hours. In reality it was a 6 hour exercise in endurance including 1.5 hours of waiting to enter the Forum after the completion of our Colosseum tour.

The kids did not take all of this very well but at least there were gladiators to entertain us and at the end of the day we did see the Colosseum and the Forum and both were pretty darn impressive. Posing with “gladiators” outside the Colosseum 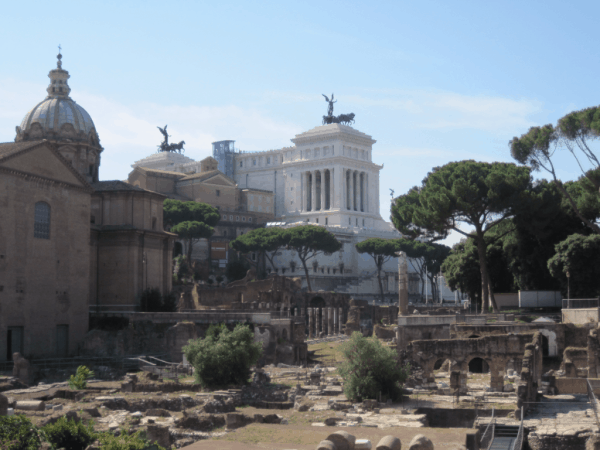 Walking through the Roman Forum

While we were busy sightseeing, we also found time to eat lots of pizza, pasta and gelato because it’s impossible to spend 2.5 days in Rome without indulging every now and then – or constantly for that matter!

Tips for a Short Family Trip to Rome

Touring the Vatican with Context Travel

How Not To See the Colosseum