On our summer road trip from Québec City to La Malbaie in the Charlevoix Region of Québec, we stopped to visit the Shrine of Sainte-Anne-de-Beaupré in the town of the same name located along the St. Lawrence River approximately a 20 minute drive north-east of the city. It’s worth visiting for the architecture and design of the Basilica even for those with no interest in visiting for religious purposes.

History of the Shrine

The Shrine of Sainte-Anne-de-Beaupré, dedicated to the mother of Mary and grandmother of Jesus, is the second oldest pilgrimage site in North America. Pilgrims have been visiting the site for more than 350 years and today the shrine welcomes annually more than a million people of all faiths from around the world. The site was declared a historic monument of Québec’s heritage in 2001.

The first chapel was built on the site in 1658 followed by a second church in 1661 and a third in 1676. In 1876, Saint Anne was proclaimed the patron saint of Québec and the first Basilica was opened on the site but that church was destroyed by fire in 1922. Construction began on the present-day Basilica in 1923 and was finally completed in 1946. The present Basilica was consecrated on July 4, 1976.

The architecture of the Basilica was inspired by Roman-style cathedrals and the building is as stunning as any of the grand cathedrals that we have seen on our travels in Europe. The 100 metre high (328 feet) Basilica was built in Romanesque revival style with some gothic elements and in the shape of a cross.

The main doors of the Basilica are a work of art created by Albert Gilles that originally hung on a church in Québec City but were moved to Sainte-Anne-de-Beaupré after the closing of that church. The doors are hand-made of copper and depict biblical scenes. Between the two bell towers, you will see the statue of Saint Anne which was saved from the fire that destroyed the first Basilica in 1922.

Guided tours are available, however, we chose to walk around the Basilica ourselves using the Visitor’s Guide which was provided to us at the entrance to locate the many points of interest.

Inside the Basilica itself there are several chapels to visit including the serene Immaculate Conception Chapel in the crypt of the Basilica which is dedicated to Mary, daughter of Saint Anne.

I didn’t take any photos there because it felt disrespectful to be snapping photos in such a peaceful place where priests were praying over visitors seeking spiritual solace.

On the grounds of the Basilica, visitors will find a garden with a fountain and statue of Saint Anne holding her grandson Jesus in the plaza immediately in front of the building. The Way of the Cross has 14 stations featuring life-sized statues made of bronzed cast-iron positioned along the hillside evoking the Passion of Jesus.

The Memorial Chapel, built in 1878 on the foundation of the third church (1676-1876), incorporates the steeple and other material retrieved from the old church into the construction of the new chapel. In a separate building, visitors will find The Scala Santa or Holy Stairs, a replica of those that Jesus ascended at Pontius Pilate’s tribunal, which contain relics and stones from the Holy Land. 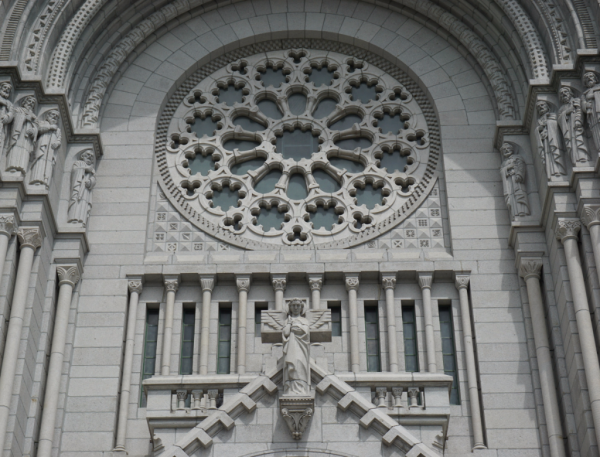 Entrance to the Basilica 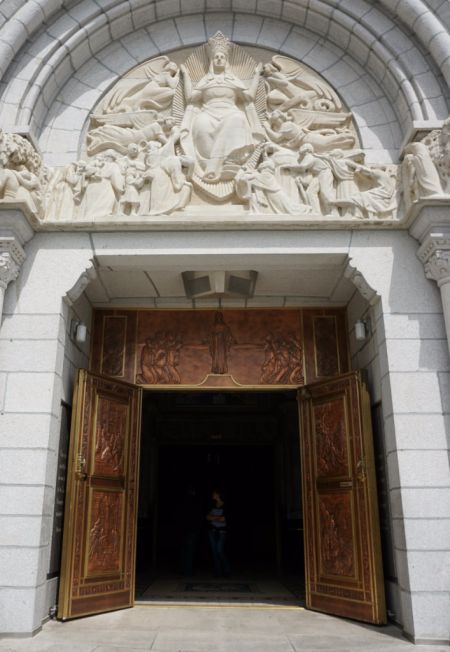 Entrance to the basilica

Fountain outside the Basilica

The Healing Power of Saint Anne

The Shrine of Sainte-Anne-de-Beaupré has been credited by the Catholic church with miracles of curing the sick and disabled. The first reported miracle happened during the construction of the original church in 1658 when a man named Louis Guimont, crippled by back pain, was miraculously healed after laying three stones in the foundation of the church. News of the miracle spread and Sainte-Anne-de-Beaupré became a popular place of pilgrimage.

Today the pillars at the entrance to the Basilica are covered with crutches, canes and braces representing those that have been healed. There is a relic exhibited in the Chapel of Saint Anne and a statue where visitors kneel in prayer to Saint Anne asking for physical or spiritual healing. The peak period of pilgrimage is around July 26 which is Saint Anne’s Feast Day. 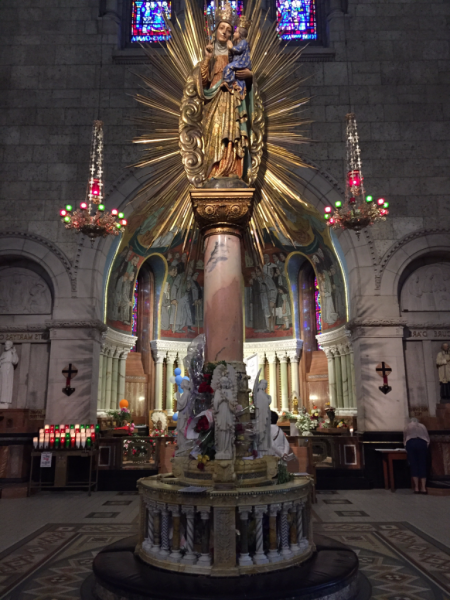 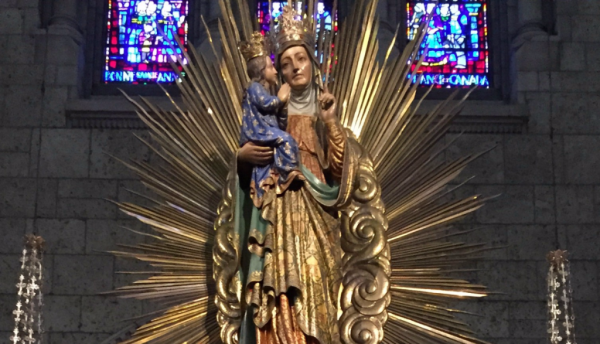 Statue of Saint Anne with her grandson Jesus

Artwork at the Basilica

The incredible artwork at the Basilica includes 240 stained glass windows created by Auguste Labouret, paintings, mosaics and many stone and wooden sculptures. Labouret also created the stunning mosaic illustrating the life of Saint Anne which decorates the Basilica’s central vault.

Among the works of art is a stunning marble reproduction of Michelangelo’s La Pieta (which we saw in St. Peter’s Basilica during our tour of the Vatican several years ago) in the Immaculate Conception Chapel on the crypt level of the Basilica. 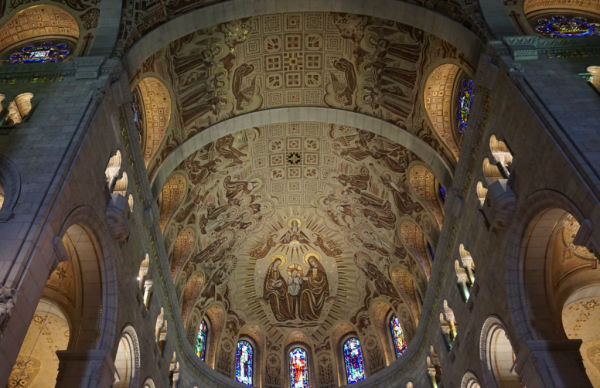 Ceiling of the Basilica 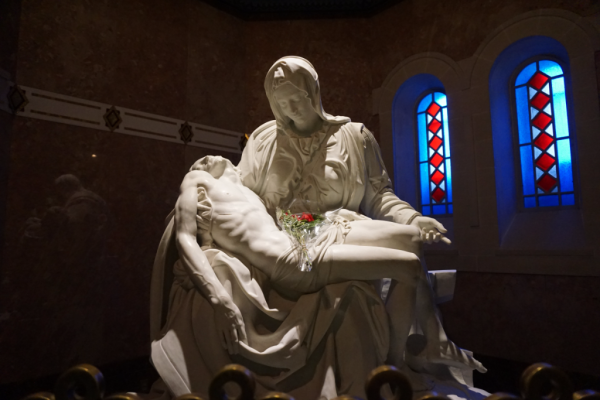 A Scenic Road Trip from Quebec City to the Charlevoix Region

10 Things to do on a Spring Break Trip to Montréal

A Winter Walk in Québec City 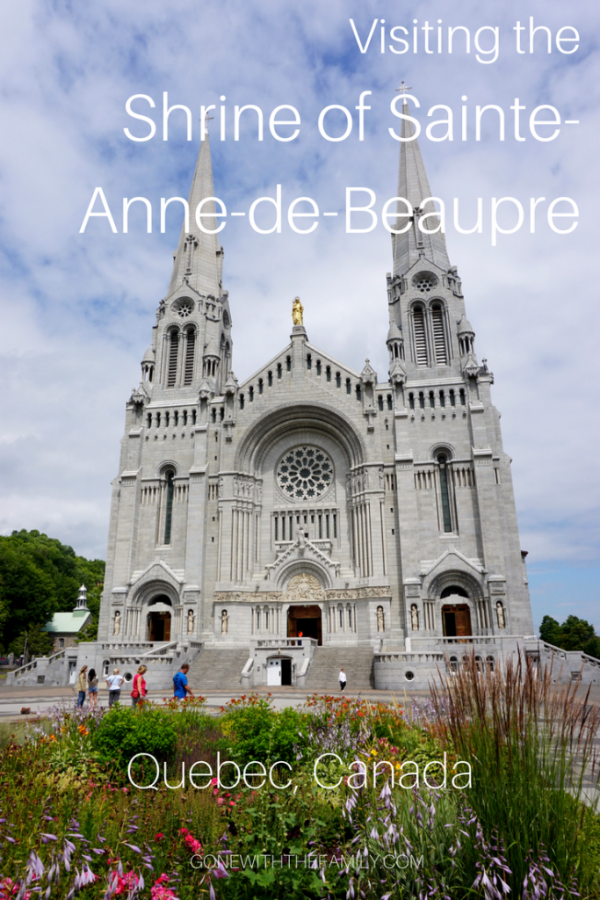