The buzz leading up to the July 15th release of the final Harry Potter film this week has at least one member of our household so excited that it has rendered her incapable of having a thought or a dream about anything else.  My teenage daughter, Katie, has been a fan of the Harry Potter franchise for many years and with the theatrical release of Harry Potter and the Deathly Hallows: Part 2  just days away her interest, like that of many other Harry Potter fans, is bordering on obsession.  Fortunately, we have been able to indulge this interest in the past year and a half by taking her to visit some Harry Potter attractions in Canada, the U.S. and in England.  Rather than satisfying her, however, these trips have just left her dreaming of more.

It all began in London last spring break when our family went on a 13 hour Harry Potter tour with London Taxi Tour that visited film locations in Lacock, Oxford and London.  Our driver/guide, Gordon, picked us up bright and early for this most anticipated part of our itinerary and we drove off in our black London cab.  Our first stop was suburban London to the house which was no. 4 Privet Drive in the movies. 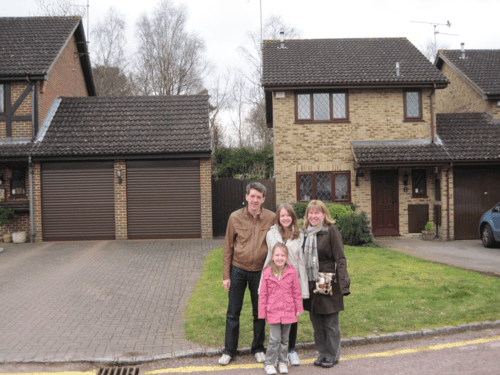 Our family outside no. 4 Privet Drive

After a brief stop at Stonehenge, we headed to the charming Wiltshire village of Lacock where a number of scenes from the movies have been filmed.  We started the tour at Lacock Abbey and it soon became apparent how knowledgeable Gordon was as he was able to explain where each scene in the movies had been shot and take photos for us at the same angle as in the film.  Katie was thoroughly impressed.  While in Lacock we also strolled by the house where Harry Potter had lived as a baby as well as Professor Slughorn's house before having lunch at a 13th century pub called The George Inn. 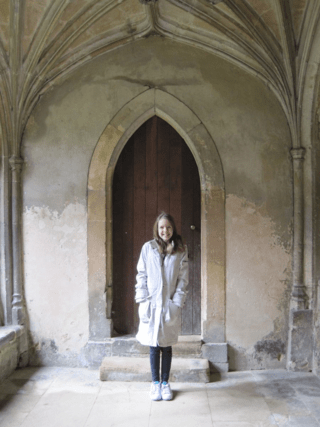 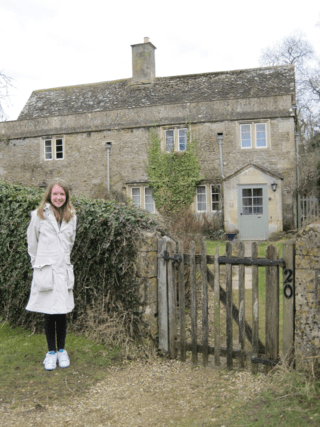 Katie outside the house where Harry Potter lived as an infant 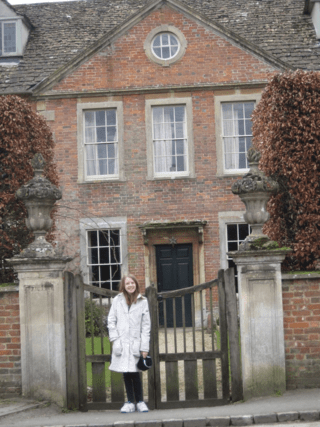 We then piled back in the car for the drive to Oxford University where many of the interior scenes from the movies were filmed. 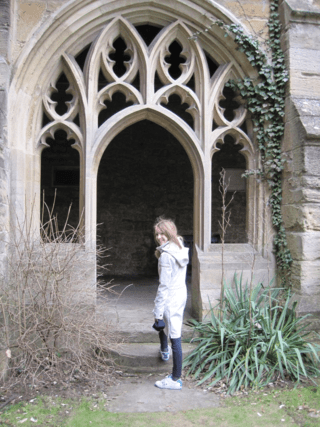 When we finished in Oxford we drove back to London to see Platform 9 3/4 at King's Cross station and to visit a few other London filming sites before saying good night to Gordon after a wonderful 13 hours of almost non-stop Harry Potter.  This was, without a doubt, one of Katie's best days ever and one that she would happily repeat.

As it turned out our trip to London was just the start of a flurry of Harry Potter related travels for Katie last year.  Later in the spring Harry Potter: The Exhibition opened at the Ontario Science Centre in Toronto and our family attended on Canada Day (July 1st).  The exhibition contained hundreds of original props and costumes from the films set up in displays inspired by the Hogwarts film sets.  It was amazing to see the props up close, particularly the flying car from The Chamber of Secrets and the Hogwart's Express engine.  The Exhibition is currently in New York City at Discovery Times Square and has now been expanded to include props from the last two movies. Katie at Harry Potter: The Exhibition in Toronto The car from Chamber of Secrets

Then on Labour Day weekend my husband took Katie for a special father/daughter weekend at The Wizarding World of Harry Potter at Universal Studios in Orlando, Florida.  The two of them spent three days at Universal Studios riding the three Harry Potter rides repeatedly, visiting the Hogsmeade shops and restaurants, and shopping for Harry Potter souvenirs.  Needless to say, Katie has been lobbying for a return trip ever since. Katie at The Wizarding World of Harry Potter in Orlando Ever since our trip to London last year Katie has been talking about returning to the UK for more Harry Potter activities.  First on her list is a tour of Leavesden Studios where much of the filming for the Harry Potter franchise took place.  Warner Bros. has bought that studio and is preparing to turn it into an attraction for Harry Potter fans and it is scheduled to open sometime in the summer of 2012.

She has also read about Alnwick Castle which is located in the historic market town of Alnwick in the northeast of England about 450 km from London and is instantly recognizable as Hogwarts Castle from the Harry Potter movies.  The castle has been a widely used film location for quite some time but has become an even more popular tourist destination because of the Harry Potter connection.  The castle was featured as Hogwarts in the first two Harry Potter movies.  Scenes that were filmed at Alnwick include the flying lesson on broomsticks in The Philosopher's Stone and the crash landing of the flying car in The Chamber of Secrets.  The castle offers a number of daily activities for families and many of these have ties to Harry Potter.  Activities include guided tours of the castle and grounds, archery lessons, magic and wizardry with a Harry Potter theme, a "Battlesticks to Broomstick" tour, three sessions a day of "Broomstick Training" with Hogwarts prefects and "Magic with Hagrid and Dumbledore".

This past weekend we both read an article that appeared on the travel blog Wandering Educators about traveling in the footsteps of Harry Potter to three of the filming locations in Scotland.  After reading this article, Scotland has now definitely been added to Katie's list of stops on her dream Harry Potter tour.

So during this week when the world is focused on Harry Potter and the Deathly Hallows: Part 2, Katie is definitely dreaming of a return trip to the UK where she can revisit some of the sights she first saw last spring and visit those that she has yet to cross off her dream list.  As for me, I'm trying to find a way to make her dreams come true.