I recently had the opportunity to explore festive Québec City over the final weekend of Winter Carnival. I thoroughly enjoyed experiencing first-hand how the people of Québec embrace winter and enjoy the outdoors no matter the weather. I didn’t realize winter could be so much fun!

I especially enjoyed sharing the beauty of snowy Québec via Instagram photos. These are my favourites from my weekend.

Upon arrival at the airport in Québec City, I was delighted to be greeted by Bonhomme Carnaval – even if he wasn’t very animated!

I checked into my room at the Hilton and was blown away by this view of Vieux (Old) Québec.

I had previously fallen in love with the city on a summer visit but soon discovered that Québec City is beautiful no matter the weather or the season.

There is something particularly romantic about bundling up for a ride around the historic city in a calèche.

The historic district of Old Québec (Vieux Québec) is surrounded by the only fortified city walls remaining in the Americas north of Mexico and gates such as this lead into and out of the old city.

We went on a walking tour that I will never forget as it was certainly the first time that I have ever walked for nearly 4 hours in a snow storm!

The Fairmont Château Frontenac is said to be one of the most photographed hotels (at least in North America) and it’s not difficult to see why. I snapped Instagram photos in the snow and then on a clearer morning before I headed home.

The Quartier Petit Champlain is a neighbourhood of quaint boutiques and bistros with a decidedly European atmosphere. With snow falling, the scene on Rue Petit Champlain was picture perfect and I couldn’t stop snapping photos despite my freezing fingers.

The area around Parliament Hill and the provincial legislative assembly building is quite lovely as well, particularly with the Fontaine de Tourny (Tourny Fountain) captured in the photo. The fountain was a gift presented to the city on it’s 400th anniversary.

Grande Allée, near Parliament Hill and the Plains of Abraham, is a street lined with cafés and restaurants and everyone seemed to be getting into the Carnival spirit here.

This year marked the 60th anniversary of Carnaval de Québec – the city’s world-famous celebration of winter. Bonhomme Carnaval is a snowman who acts as the carnival’s ambassador and “personifies the joie de vivre associated with the celebration”. A tour of Bonhomme’s Ice Palace is a must for everyone visiting for Carnaval.

The Carnival is a 3 week long celebration of winter with activities to be enjoyed by people of all ages. One of the craziest things that I have ever witnessed is the annual Snow Bath which involves participants in bathing suits frolicking in the snow with Bonhomme!

The Hôtel de Glace (Ice Hotel) which is located just a few minutes drive outside of Québec City is an incredible sight to see. The Ice Hotel has to be reconstructed annually and the 2014 version includes elements from Disney’s Frozen movie. Even if you aren’t spending the night, you can tour the hotel and see the ice bars, the Chapel, the Grand Hall, the rooms and the themed suites. 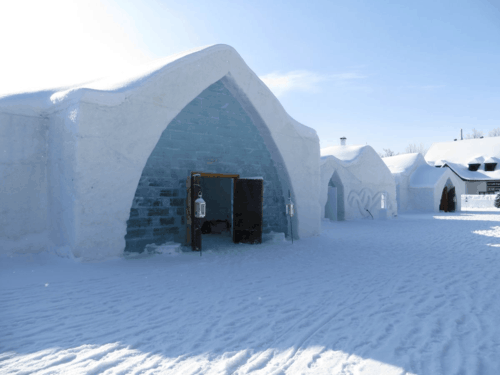 Outside the Ice Hotel

I was visiting without my family so I had to promise my daughter that I would take photos of Olaf the Snowman from Frozen and the Reines de Neige suite which was designed as the room of princesses Anna and Elsa from the movie.

The Chapel at the Ice Hotel is stunning and is apparently a popular venue for weddings.

Even someone like me, who doesn’t generally like the cold, can’t help but get caught up in the magical atmosphere of Québec City during Carnaval. I discovered on my weekend in Québec that enjoying winter is all about the attitude – and the layers of warm clothing, of course!

10 Things To Do at the Quebec Winter Carnival

A Winter Walk in Québec City: A Photo Essay