Our family loved the informative and entertaining Disney on Broadway tour with Walks of New York.

As a last hurrah before the start of the school year, my husband, our 12 year-old daughter and I spent Labour Day weekend in New York City. Having been to the city several times, the only thing that Emma was interested in for this last minute trip was seeing as many Broadway shows as possible in 3 days. I did a bit of research though and discovered that Walks of New York has a tour called Disney on Broadway that I was sure our family of theatre geeks would love.

About Walks of New York

Walks of New York is operated by the same group that has been running the well-known tour company Walks of Italy for many years. The company believes the best way to travel is to walk and discover a city at ground level – a philosophy that I wholeheartedly endorse. They offer small group walking tours of 25 or fewer people using local guides who are handpicked for their expertise in providing clients with an insider’s view of the city.

In New York City, the company offers a number of tours that range between 2-4 hours including tours of the Metropolitan Museum of Art, the Statue of Liberty, the 9/11 Memorial Museum, Greenwich Village, the Lower East Side and, of course, Disney on Broadway.

Theatre is what my family does for fun. We are very involved with local community theatre – both of my daughters have been performing in musicals for years and my husband and I both work behind the scenes. We see a lot of professional theatre as well both at home and when we are traveling so as soon as I read this description of the Disney on Broadway tour, I knew that we had to book it.

Join our Broadway Insiders for a guided walking tour; then tour The New Amsterdam Theatre, visiting Disney’s Prop Studio getting up-close and personal with original props, costumes, and set pieces that bring the world of Disney Theatrical to life.

Our tour was scheduled for Sunday morning at 9:30 and we met our tour guide, Jeff Dobbins, and the others in our tour group in Times Square where participants are advised to congregate 15 minutes early to ensure that the tour gets started on time.

Generally the 2.5 hour tour commences with the guided walk followed by the tour of the New Amsterdam Theatre but we headed directly to the theatre because there were two performances of Aladdin scheduled that day and we needed to be in and out before staff started to prepare for the first show. 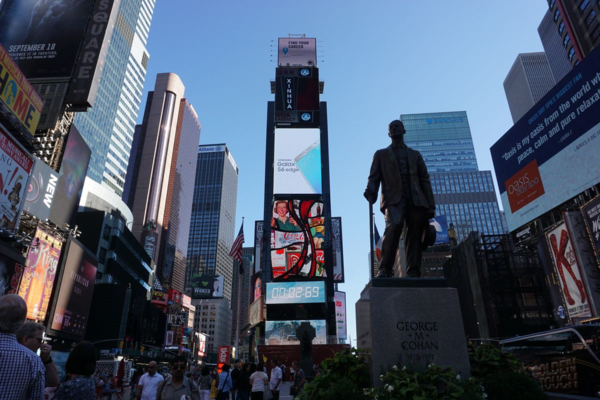 Meeting in Times Square for the start of our tour

Jeff chatted with us a bit about what we would be seeing on the tour and Broadway in general during our short walk to the New Amsterdam Theatre which is owned by Disney Theatrical Productions Ltd. (aka Disney on Broadway). We were met at the theatre doors by the in-house guide from Disney Theatrical who would conduct that portion of our tour.

We had attended a performance of Aladdin on our previous visit to New York City in February and our very first Broadway musical was Mary Poppins here in 2006 so we were excited to gain some inside knowledge about the theatre. 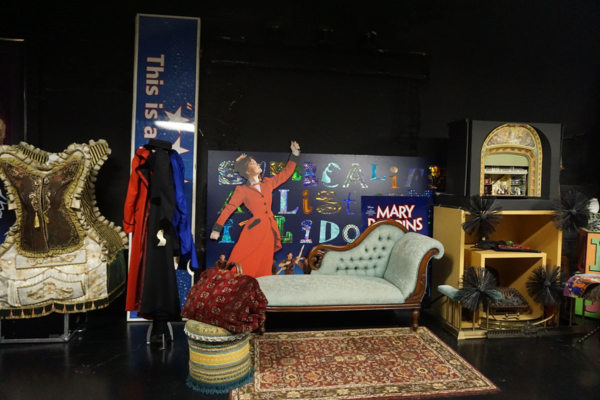 Props and costumes from Mary Poppins

We started in the Costume and Props Studio which was the highlight of the entire tour for us. The room contains a collection of authentic props, costumes and other items from several of the shows produced by Disney Theatrical including Beauty and the Beast, Mary Poppins, Lion King, Aida, Newsies, The Little Mermaid, and Tarzan. After a brief description of what could be found on display for each show we had time to exam props and try on costumes. 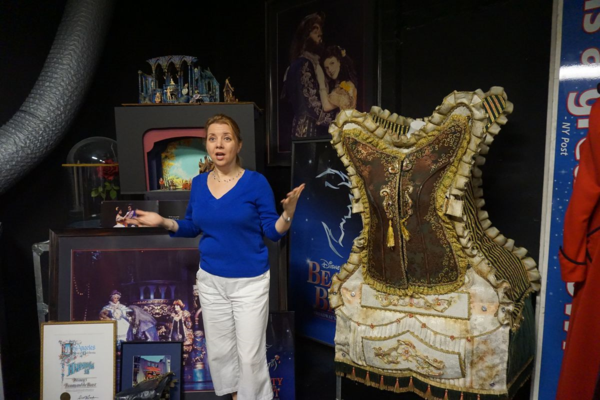 Starting our tour of the props and costumes room

This part of the tour is an incredible amount of fun for anyone who loves either Disney or Broadway or both! I don’t think Emma stopped smiling the entire time as she tried to fit everything in as quickly as possible – wearing a headdress from Lion King, dressing as Mary Poppins, sitting in Ariel’s clamshell and much more. Emma dreams of performing on Broadway some day and this was an experience that she will never forget. 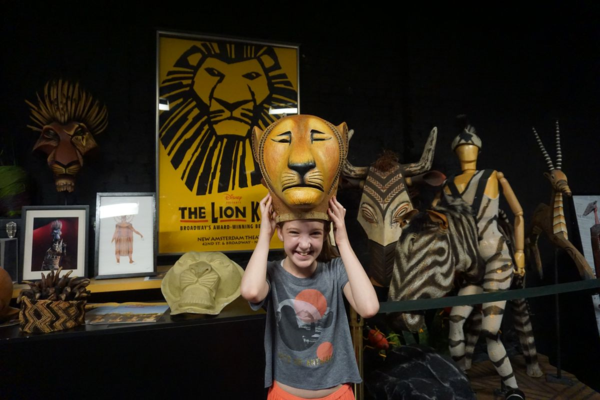 Trying on a headdress from The Lion King 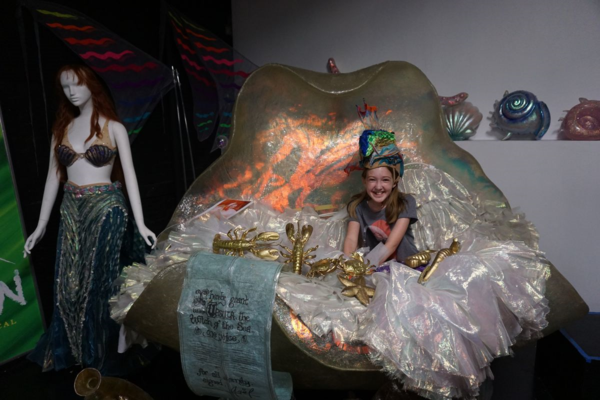 Ariel’s clamshell seems to be a perfect fit!

The limited time we had here passed far too quickly and we left the prop room to head to the empty theatre to learn more about the history of the building and Disney Theatrical. It was fascinating hearing more of the backstory of The New Amsterdam Theatre which opened on West 42nd Street between 7th and 8th Avenues in 1903 and today is one of the oldest surviving Broadway venues.

The theatre opened with a production of Shakespeare’s A Midsummer’s Night Dream and later became the home to the wildly successful Ziegfeld Follies. The Great Depression was disastrous for Broadway though and the building was converted into a movie theatre for a time and became quite run down.

Both the Art Nouveau interior and the Beaux-Arts exterior of the theatre were declared New York City landmarks but the deterioration continued until the City assumed ownership as part of the redevelopment of Times Square. A few years later, Disney Theatrical signed a lease and began a multi-million dollar restoration to return the dilapidated building to its original grandeur. 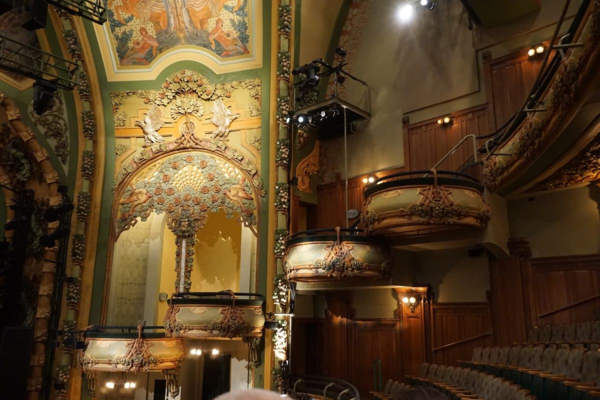 Inside the New Amsterdam Theatre

Leaving the New Amsterdam Theatre, we headed out on the guided walk portion of our tour to see many of the theatres in the district as well as Times Square, Shubert Alley and Sardi’s Restaurant and to learn more about the history of Broadway.

Jeff is a very informative guide with an in-depth knowledge of the history of Broadway acquired from years of experience working in many aspects of the business. After learning about Sardi’s on our tour we made a reservation and had an enjoyable dinner there that same evening. 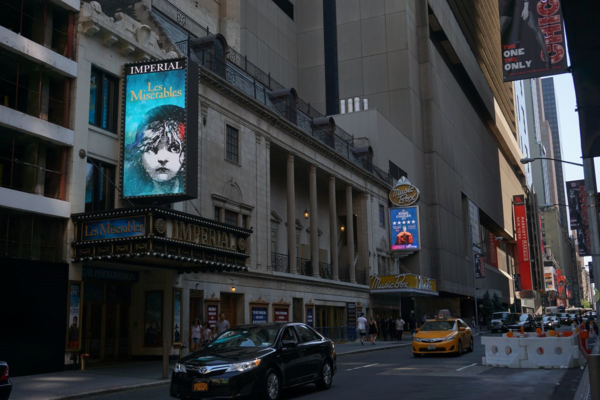 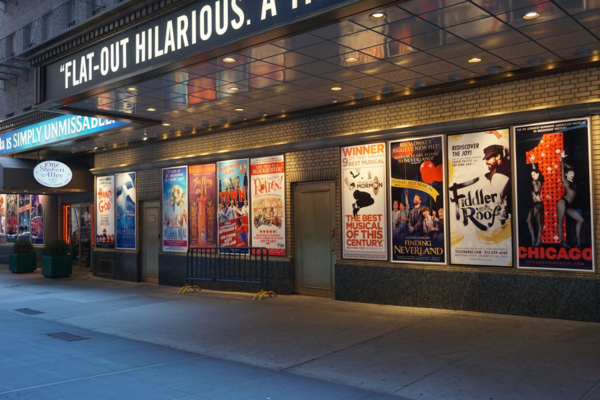 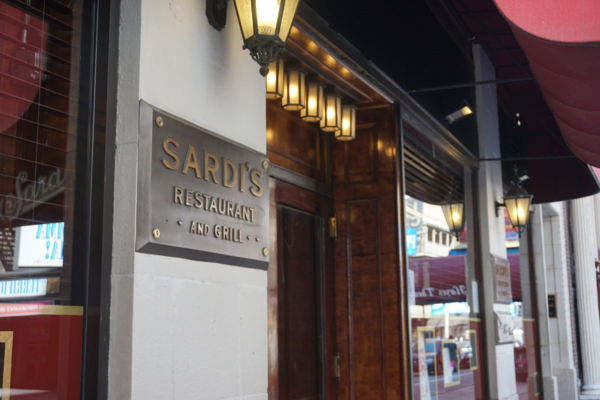 Time flew by and before we knew it our tour had ended. We have been on many tours over the years and this was one of the most informative and entertaining that we have ever taken. The subject matter was right up our alley but, as is so often the case, a quality guide can make or break the experience and Jeff is one of the best. If you love Broadway or Disney and are going to be in New York City then you must book this tour – you can thank me later!

25 Fun Things To Do With Teens in New York City

11 Festive Ways to Celebrate the Holidays in New York City

30+ Fun Things To Do in New York City in Winter