On July 12th the Canadian premiere of Harry Potter and the Deathly Hallows – Part 2 was held at the Scotiabank Theatre in the heart of the entertainment district in downtown Toronto.  On a typical day this theatre is located at the corner of Richmond and John Streets however, as a tribute to the Harry Potter phenomenon, Toronto City Council renamed the streets Harry Potter Boulevard and Hogwarts Way for the day.  Although we weren't able to obtain tickets for the screening, I agreed to take my daughter to the city on the train and accompany her and a friend to wait in the crowds outside the theatre. At the corner of Harry Potter Blvd. and Hogwarts Way, Toronto

We arrived outside the theatre around 2:30pm and there was already a large and excited crowd there as well as across the street outside Much Music's headquarters.  Rumours had flown all week about actors possibly turning up at the premiere, however, the only confirmed information was that Matt Lewis who plays Neville Longbottom would be at Much Music for a 5pm taping and then to the theatre to make an appearance before heading to Casa Loma for an after party. 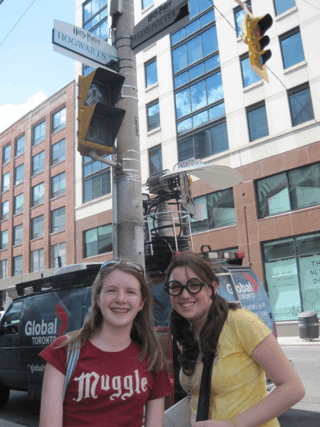 Katie and her friend Marlee

The girls were excited at the prospect of seeing Matt Lewis and hoping that some of the other Harry Potter actors might make an appearance so they found a spot to make an attention-grabbing poster. Many of the fans waiting outside the theatre had arrived many hours earlier – some as early as 6am.  Katie was wishing that we could have been there sooner but the 5 hours that we ended up standing out in the scorching sun were plenty for me. Wall art outside the theatre

The area was crawling with reporters, photographers and film crews interviewing fans about what Harry Potter has meant to them and how they feel now that this era is drawing to a close.  Katie and Marlee were interviewed several times by newspaper reporters and Marlee's photo appeared in the following day's edition of The Globe and Mail. 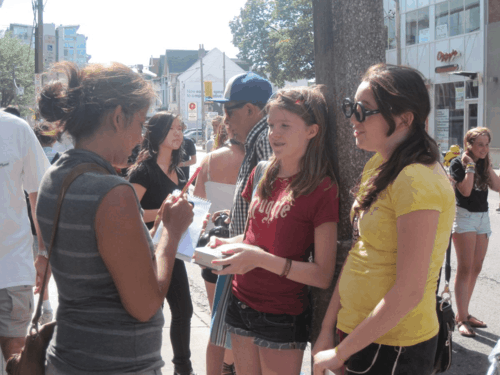 The girls were interviewed by a few reporters

And finally what they had been waiting hours for – Matt Lewis drove by in a vehicle and waved to the crowd.  And that was it. 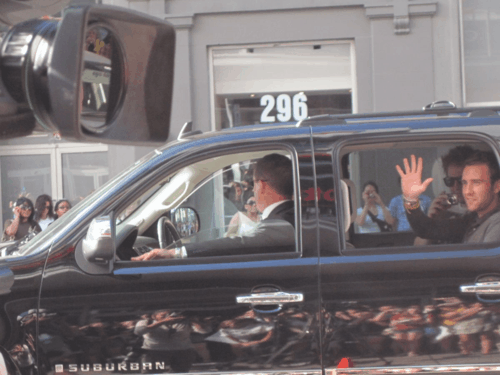 The girls were absolutely thrilled with their day (despite only getting a glimpse of Matt Lewis) and I, quite frankly, enjoyed witnessing their excitement. The crowd sustained the same high energy level over the several hours of waiting and for many, I suspect, it was just a warmup for several days of Harry Potter mania.  Spending hours talking to like-minded fans, cheering for the cameras, and spontaneously breaking into songs from "A Very Potter Musical" are moments that will be forever ingrained in their memories.  There is little doubt that J.K. Rowling's Harry Potter series of books, and the eight films based on them, have been a magical phenomenon that engaged boys and girls alike in the wizarding world and, although there may not be any new books or films, the impact of this series will continue to be felt long into the future.  The magic of Harry Potter was evident in the joyful faces of the throngs of young people outside the Scotiabank Theatre in Toronto yesterday and I feel privileged to have been there to witness it.