One summer vacation when our daughters were young we went on a road trip from our home near Toronto to the province of Québec and to the Canadian capital city of Ottawa. We spent 3 nights in Québec City, 6 nights in Montebello, Québec and 4 nights in Ottawa. At the time of this trip Katie was 8 years old and Emma had just turned 2.

The first day of our road trip was a long one as we needed to drive from our home in Oakville (outside Toronto) to Québec City – a distance of approximately 750km. With a couple of stops along the way it took the entire day to reach Québec and we arrived with just enough time to check into our hotel, have dinner and take a short walk around before settling in for the night.

Québec City, or Ville de Québec, was the first significant settlement in Canada and is now the capital of the province of Québec. It was founded by Samuel de Champlain in 1608 and is one of the oldest cities in North America. The historic district of the city (Vieux-Québec) was named a UNESCO World Heritage Site in 1985. The ramparts of Vieux-Québec are the only remaining fortified city walls still in existence in the Americas north of Mexico.

Once within the walls of Vieux-Québec nearly everything that visitors would want to do is within walking distance and it is a city which is best explored on foot. The two main areas of interest for visitors to Vieux-Québec are Haute-Ville (Upper Town) and Basse-Ville (Lower Town) which are both within the walls of the old city. The settlement originated in Basse-Ville along the banks of the river, however, as years passed the fear of attack from the river led many of the residents to head up the cliffs and establish residence on higher safer ground.

Where to Stay in Quebec City

We stayed at the Fairmont Château Frontenac which sits high on a bluff in Haute-Ville overlooking the St. Lawrence River. The hotel was first built to serve railroad passengers who were on the forefront of a developing tourism industry. Our daughters were thrilled with the Château which is more than a century old and resembles a story-book castle complete with towers and turrets. After all, who doesn’t love to pretend to be a fairytale princess living in her castle?

The pedestrian-only boardwalk called Terasse Dufferin runs in front of the Château and bustles with crowds of tourists and street performers, particularly during the summer months. The views of the St. Lawrence River from La Terasse Dufferin are nothing short of magnificent. Playing on the cannons near the Château

The next morning we headed to La Citadelle which is the largest British fortress built in North America. La Citadelle is an active military garrison which was built on the Plains of Abraham, between 1820 and 1850, and is shaped like a polygon with four angles representing a star. The Duke of Wellington had this fortress built in anticipation of further attacks from the Americans after the war of 1812.

La Citadelle is open for guided tours and during the summer the men and women of the 22e Régiment (the only fully francophone unit in the Canadian armed forces) perform ceremonies such as the Changing of the Guard and the Beating of the Retreat. La Citadelle has been a National Historic Site of Canada since 1980. There is also a museum on site which houses one of Canada’s largest military collections covering over 300 years of history from the French Colonial period until today.

We joined one of the guided tours (available in English or French) to walk around La Citadelle and explore the museums. The kids weren’t at all interested in the narrative provided by the guide, however, it was a beautiful day and they did enjoy the walk around the fortress, particularly the many cannons pointing out to sea. We also watched the Changing of the Guard and marvelled at the views of Vieux Québec (particularly of Château Frontenac) from the overlooks at the walls of the fortress.

Changing of the Guard at La Citadelle 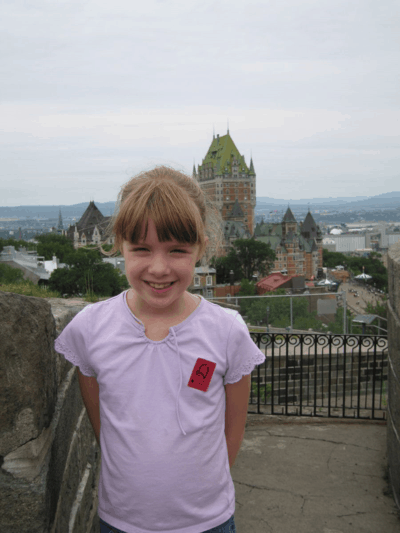 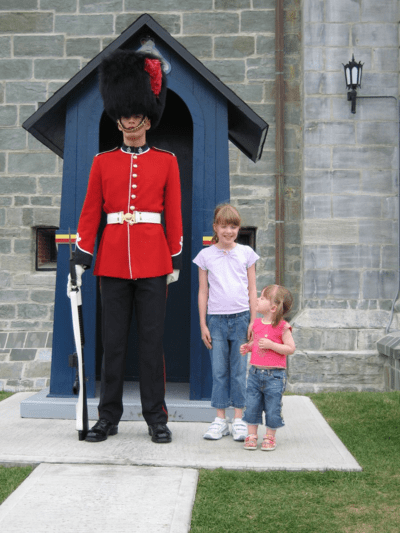 A stone-faced guard at La Citadelle

One of the most popular, and most expensive, ways to tour Vieux-Québec is in a horse-drawn carriage called a calèche. The carriages are lined up in the area around the Château Frontenac and the Place d’Armes so it is very easy to find one when your kids are clamouring for a ride. We enjoyed the calèche ride so much that we had to repeat it again the next day.

Our older daughter particularly liked that the driver let her take the reins at one point when we were out of traffic. Our younger daughter enjoyed the gentle trotting rhythm so much that she fell asleep on our first calèche ride, however, she did manage to stay awake for the second. 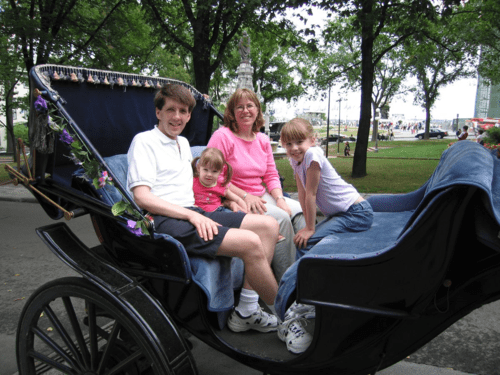 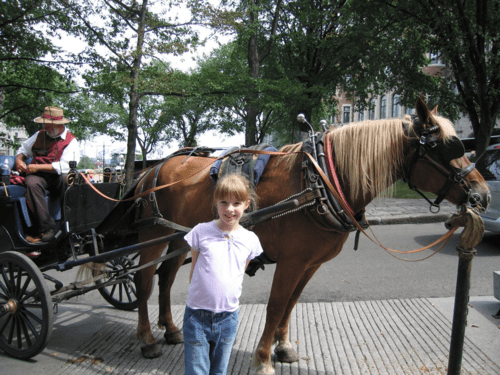 Katie with the horse and calèche

The two most popular options for descending from Haute-Ville to Basse-Ville are by funicular or by a set of stairs built into the side of the cliff. On our first trip down we decided to take the funicular which can be boarded near Château Frontenac on the Terasse Dufferin and descends down an inclined 63m track to the Quartier du Petit-Champlain.

Anyone with a fear of heights may want to either take the stairs or close their eyes as the funicular begins the steep descent down the cliff side. It was as good as a theme park ride as far as the kids were concerned. 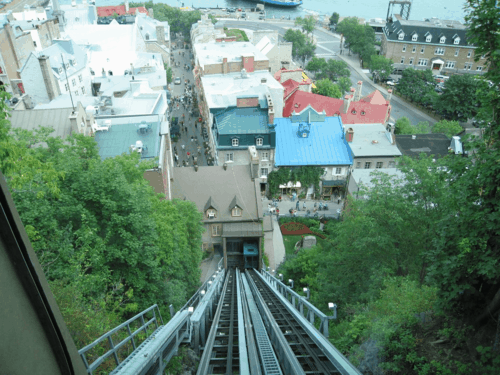 Descending to Basse-ville on the funicular

In Basse-Ville we walked around exploring Place Royale and the rest of the historic area. Place Royale was the town marketplace in the original settlement of New France and the square is surrounded by beautiful 17th and 18th century stone houses that would have belonged to wealthy merchants. 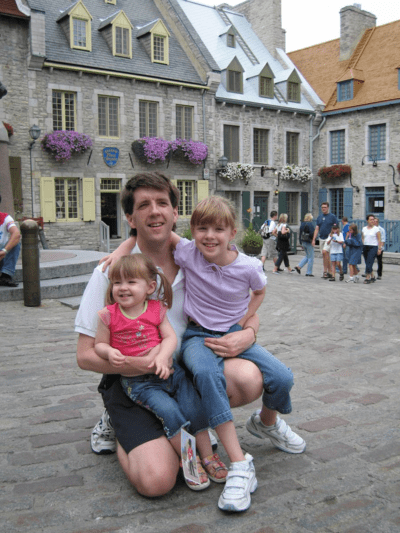 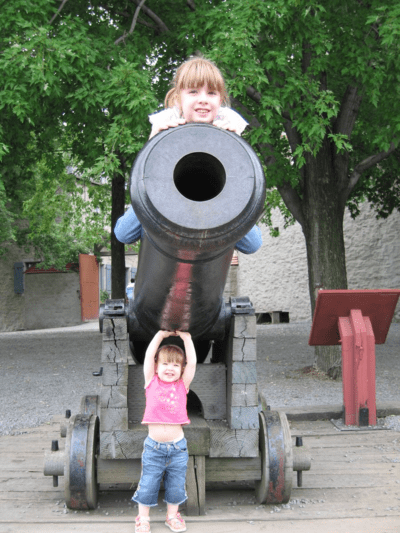 My girls in Basse-Ville (Château Frontenac in background)

We also paid a visit to the family-friendly La Musée de la Civilisation which is widely acclaimed as one of the best museums in the country. Our daughters particularly enjoyed dressing up in the costumes of British and French soldiers (and reenacting our very own battle on the Plains of Abraham). 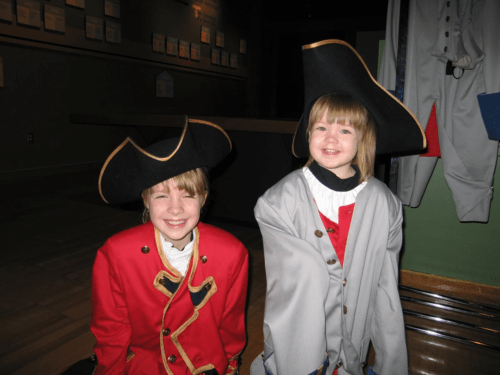 The British and the French dressed for battle at La Musée

Katie was quite taken by the expansive, breathtaking mural in Place Royale which is called Fresque de Québécois and recounts the story of Québec City. Québec’s distinctive architecture is represented in the mural and if you look closely at the windows then you will see historical figures, writers and artists depicted. It is sometimes hard to distinguish the painted people from the real – particularly in photographs. 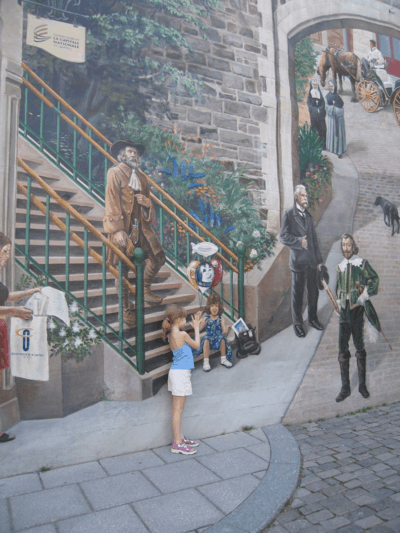 The next day we headed down L’Escalier Casse-Cou (The “Break Neck Stairs”) to shop on Rue du Petit-Champlain which is a beehive of activity. L’Escalier Casse-Cou (the name is self-explanatory when you see the stairs) connects the Terasse Dufferin at the top of the cliff with Rue du Petit-Champlain at the bottom. These particular stairs have been there since the settlement first existed.

Rue du Petit-Champlain (which may or may not be the oldest street in North America) is decidedly touristy, however it is a still a lot of fun to browse the shops or sit in a café and soak up the atmosphere of this very European neighbourhood. On our last morning we had one last walk around before bidding au revoir to Québec City. We did some browsing in the Rue du Trésor which is located in an alley near Place d’Armes. This is an area where artists gather to sell their work – mostly prints of Québec scenes. They also seem to do a booming business sketching tourists – particularly cute kids. There are also many souvenir shops nearby that are fun for the kids to poke around in.

Our family thoroughly enjoyed the time that we spent in Vieux Québec immersing ourselves in this very French city. It is a great city to visit with young children because the historic area is quite compact and easy to explore on foot, there are lots of attractions to keep families busy, and most importantly it is a great introduction to French culture and provides an opportunity to practice the French being learned at school.  We had a great time but after 3 days we were hitting the road again – destination Montebello. 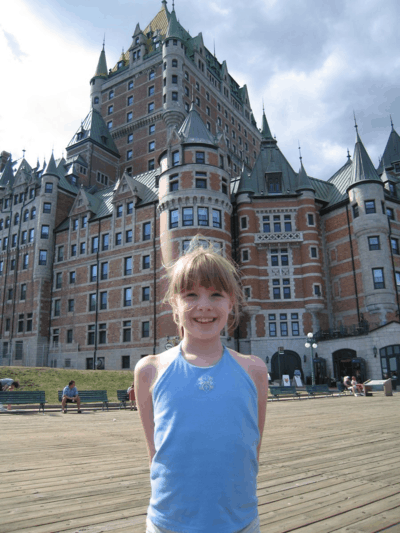 Katie on the boardwalk in front of Château Frontenac 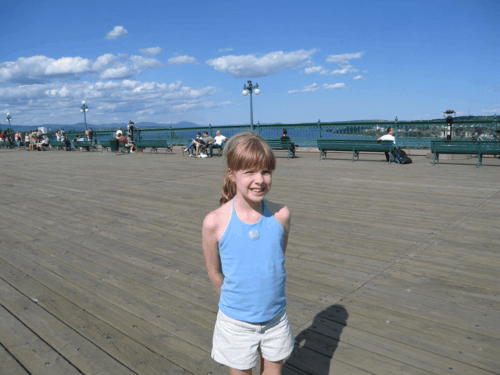 Katie on the boardwalk with the St. Lawrence river in the background

10 Things To Do at the Quebec Winter Carnival

A Scenic Road Trip from Quebec City to the Charlevoix Region

A Winter Walk in Québec City