Family-friendly holiday events in Toronto and the GTA (update 2016)

The first snowfall of the year is behind us now and the most magical season of the year is well under way. Everyone is in the mood for celebrating and there are a number of holiday events taking place in the city of Toronto and in the Greater Toronto Area (the “GTA”) over the coming weeks that are perfect for families.

The Toronto Santa Claus Parade kicked off the city’s holiday celebration in mid-November when thousands of people lined the streets along the route for the 111th annual running of the parade that has become a Toronto Christmas tradition. If you missed this year’s parade then be sure to mark it on your calendar for next year but in the meantime there are smaller Santa Claus parades held in other communities in the GTA which will be taking place over the next couple of weeks. The Cavalcade of Lights is a free event which is held annually in Nathan Phillips Square and features the lighting of Toronto’s official Christmas tree as well as entertainers, fireworks and a skating party. The tree is generally between 55 and 65 feet high and features 12,500 feet of LED lights and 700 individual ornaments. The 2016 Cavalcade of Lights will take place on Saturday, November 26, 2016 at 7 pm in Nathan Phillips Square at 100 Queen St. W. 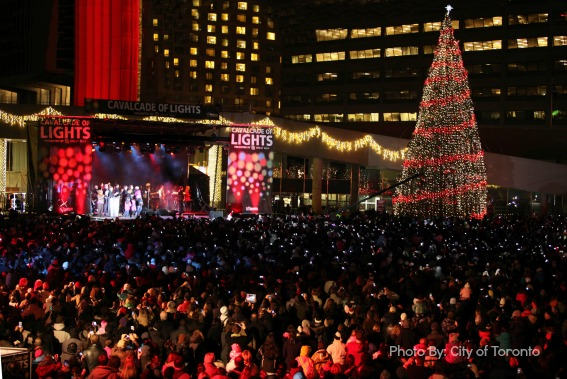 The European-style market in the Distillery Historic District was first held just a few years ago but this Toronto Christmas Market has quickly become a favourite holiday tradition for many families and gets better every year. The market has also been named One of the World’s 10  Best Holiday Markets by Fodor’s Travel. In addition to the wonderful shopping opportunities there are activities and entertainment that will appeal to all ages including carolers, Santa’s Elves Sing-Along, choir and band performances, a ferris wheel and carousel, Santa’s House with photographer and a life-sized Gingerbread House. In 2016 the market runs from Friday November 18th through Thursday December 22nd, Tuesday – Thursday 12 noon-9pm, Friday 12 noon – 10pm, Saturday 10am – 10pm, and Sunday 10am – 9pm. Admission is free on weekdays, however, there is a $6 admission fee on weekends starting Friday at 5pm. 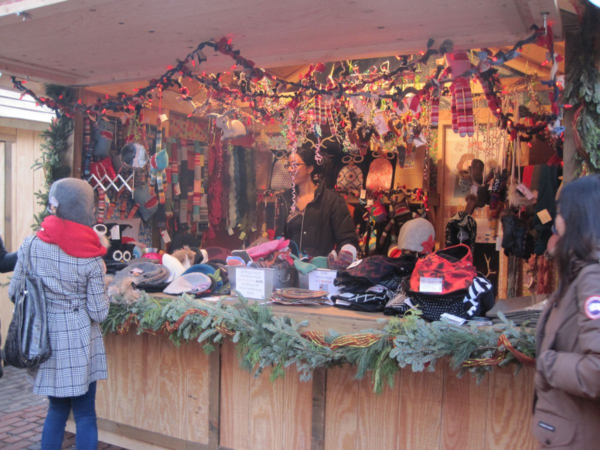 12 Trees of Christmas at the Gardiner Museum

For more than 25 years, the Gardiner Museum has celebrated the season with the 12 Trees of Christmas – a display of Christmas trees decorated by renowned designers based on a central theme. In 2014 the theme was The Toronto Edition and each of the twelve participating designers selected a Toronto neighbourhood for inspiration and created a one-of-a-kind Christmas tree. In 2015 the theme is The Joy of Creativity and the 12 designers have reimagined the Christmas tree using diverse mediums. The 2016 theme is “Good for the Earth” and the exhibit runs from November 18, 2016 – January 8, 2017 at the Gardiner Museum at 111 Queen’s Park just south of Bloor Street. 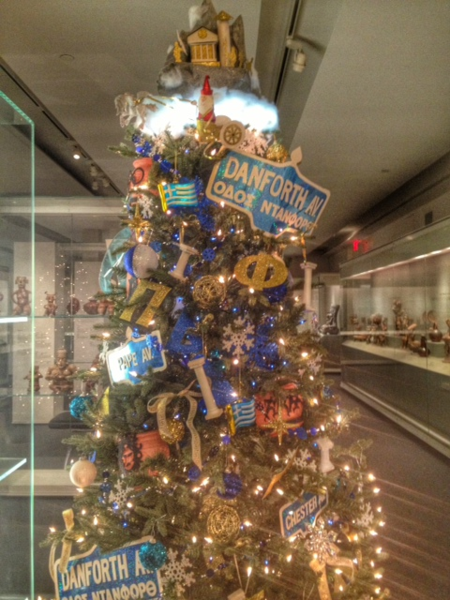 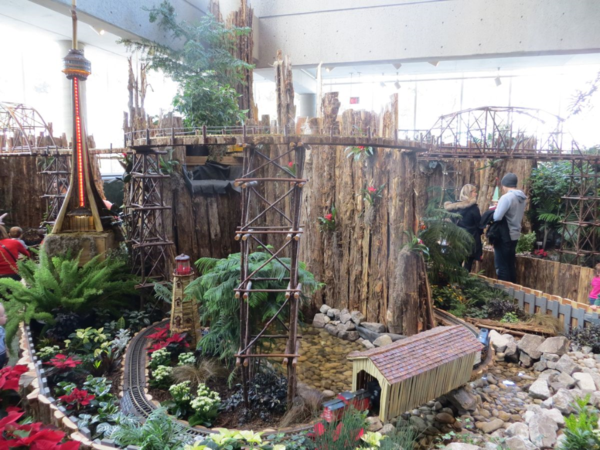 One of my family’s favourite activities during the holiday season is to take in a show or two. Our favourite is the Ross Petty pantomime which has been held annually at the Elgin Theatre since 1997. This year’s show, Sleeping Beauty, runs November 25, 2016 – January 7, 2017.

Other family-friendly shows this holiday season include:

The Nutcracker performed by The National Ballet of Canada at The Four Seasons Centre for the Performing Arts at 145 Queen St. West – December 10, 2016 – December 31, 2016.

The Toronto Symphony Orchestra presents The Twelve Days of Christmas at Roy Thomson Hall on Friday December 9th at 7:00pm and Sunday December 11th, 2016 at 3:00pm.

The Second City presents What The Elf?!? a hilarious, musical holiday extravaganza for kids, parents, grandparents, siblings and reindeer of all ages at the Toronto Mainstage Theatre November 27, 2016 – December 3, 2016.

The wonderful production of Matilda: The Musical continues at Ed Mirvish Theatre through January 8, 2017.

My favourite time to visit Casa Loma is at Christmas when it’s decked for the holidays and there are special activities and entertainment for guests. This year’s When You Wish Upon a Star celebration will take place from December 1st, 2016 – January 8th, 2017 and will feature family-friendly activities and entertainment as well as festive decor and 10 trees decorated by celebrity designers. Kids will also be invited to visit Santa in his workshop, participate in creative arts and crafts, visit with wintery holiday mascots, decorate tasty treats, sing along with live carollers and much more! There will also be a display of festive light sculptures in the gardens of Casa Loma on Wednesday nights in December as part of Magical Winterland Nights at Casa Loma. Every Saturday and Sunday in December, visitors to the Legoland Discovery Centre in Toronto can Jump inside the World’s Most Festive Box of LEGO Bricks. The centre will be decorated for the season and special holiday-themed activities will include building challenges, the Winter Wonderland Scavenger Hunt in MINILAND, a Tree Ornament Build and opportunity to visit the Santa Chair. Be sure to pre-book tickets online to avoid disappoint. Holiday event dates in 2016 are December 3rd – 31st.

The holidays are a great time to visit Black Creek Pioneer Village to experience some old-fashioned Christmas fun. During Christmas at Black Creek (November 19 – December 23, 2016), families can tour the historic houses to learn more about the origin of Christmas traditions, take part in special activities and sample some traditional Christmas foods. On weekends in December, there will also be horse-drawn wagon rides around the village available and Santa will be greeting visitors in his cottage.

Black Creek Pioneer Village also has three evenings of Christmas by Lamplight when visitors can explore the candle-lit village from 6pm-9:30pm while enjoying folk music, Christmas caroling, and choirs. Visitors may also create seasonal ornaments and crafts, sample festive foods and shop for one-of-a-kind items handmade in the village. 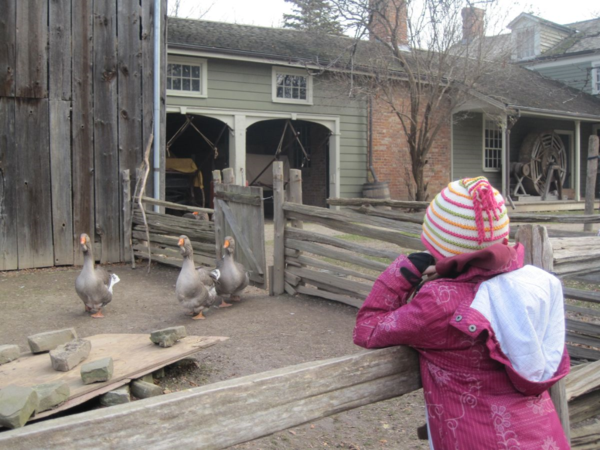 Holidays on the Toronto Waterfront

Families can join Santa and his elves for a 2 hour cruise of the Toronto Harbour aboard Mariposa Cruises‘ Northern Spirit which includes a delicous buffet brunch, a complimentary family photo with Santa Claus and on-board activities. The Spectacle of Lights on Toronto’s Waterfront also opens on November 26, 2016 featuring stunning illuminations at several sites along the waterfront.

The Natrel Rink at the Harbourfront Centre is now open for the season so families can enjoy free skating at the city’s most scenic outdoor rink over the holidays. There is a heated indoor change room with lockers and washrooms and there is also hot food and drinks available at the rink-side restaurant. Skates and helmets for both children and adults are also available for rental. The rink is located at 235 Queens Quay West and is open Sunday to Thursday 10am – 10pm and Friday/Saturday 10am – 11pm. 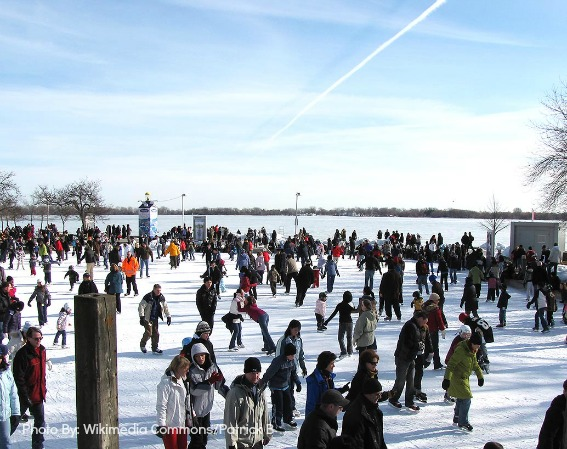 Each year the York-Durham Heritage Railway operates a popular Santa Train on specified Saturdays and Sundays during the holiday season. The trains leave from Uxbridge Station and last approximately one hour with onboard entertainment for children of all ages. Santa visits each child at their seat on the train and each child receives a goodie bag when they depart the train. Seating is limited and by reservation only so book early to avoid disappointment. In 2016 the Santa Train runs November 26th – December 18th.

A Christmas Market in Toronto