Travelers along Canada’s Atlantic coast can’t help but be struck by the beauty of the lighthouses that served as beacons to sailors trying to safely navigate the rugged coastline.  Modern electronic navigation may have made them obsolete but they still stand as important symbols in nautical history.  These are a few of my favourites.

The Lighthouses at Cape Spear, Newfoundland

The Cape Spear Lighthouse, near St. John’s, has been designated a National Historic Site of Canada for its unique heritage value as the oldest surviving lighthouse in Newfoundland and Labrador.  A first light was placed at the entrance to St. John’s Harbour in 1810 but it wasn’t until the 1830s that the need for another lighthouse was discussed.  Cape Spear was chosen as the location and construction of the lighthouse was completed in 1836.

The lighthouse was built as a 2 storey square structure with the light tower in the middle of the building.  This unique architecture became a common structure for lighthouses in Newfoundland during that era as the building would also serve as the residence for the lighthouse keeper and his family.  Generations of the Cantwell family served as lightkeepers at Cape Spear for over 150 years.

Today the historic lighthouse has been restored to its original appearance and refurnished as a light keeper’s residence from the mid-19th century. 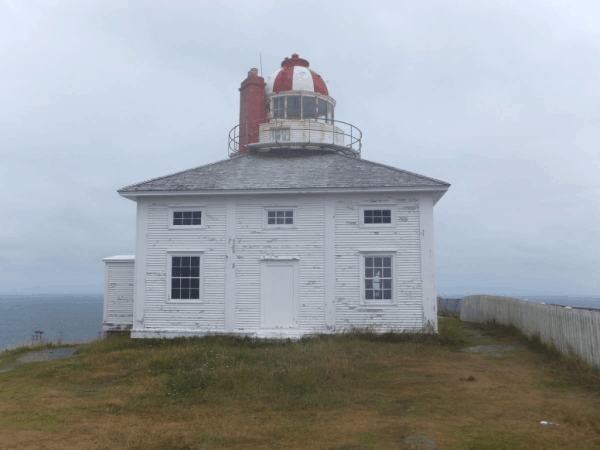 A modern lighthouse tower was built at Cape Spear in 1955 using the light from the original lighthouse. 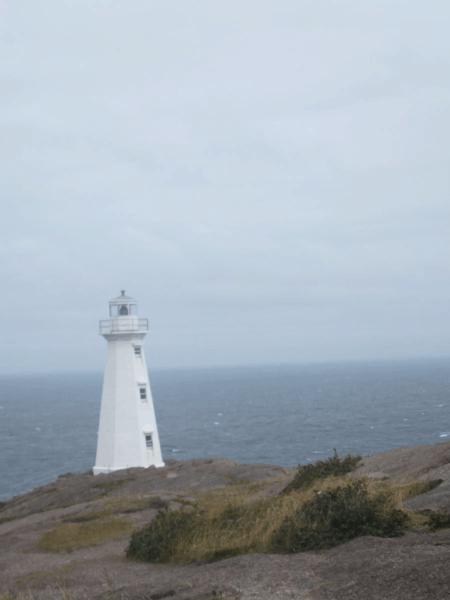 This classic red and white lighthouse at Ferryland Head was built in 1870 and for the first 100 years of its existence it was staffed by families living in the two-family dwelling that was built alongside.  The first lighthouse keeper was a ship builder named Michael Kearney and his assistant keeper was William Costello.  The Costello family continued as the primary keepers of the light at Ferryland for 100 years.  The lighthouse is still operational but it is now automated.  The lighthouse dwelling was abandoned and fell into disrepair until it was restored by Lighthouse Picnics and reopened in 2004.  Visitors can now pre-order a picnic lunch and dine on the cliffs while enjoying the stunning view. The red and white striped lighthouse at Cape Bonavista was built in 1843 and is now a Provincial Historic Site that has been restored to the 1870s period.  The lighthouse tower is in the centre of the building and it is one of the few in the world where visitors can climb the tower and see the apparatus that was used by the lighthouse keeper.  The building has been furnished as it would have been in the late 19th century and visitors can learn more about what life was like for the keeper and his family at that time.  Bonavista was one of the places that I most wanted to visit while in Newfoundland because of this song that I learned as a child.

This land is your land,

This land is my land,

From the Arctic Circle,

to the Great Lake waters,

This land was made for you and me. 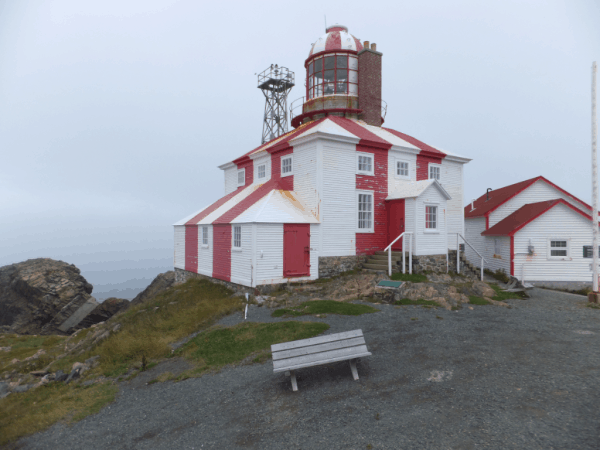 The classic red and white octagonal lighthouse perched on the granite rocks of the cove was built in 1914 to replace an older structure and is one of the most recognizable landmarks in Canada.  It is also one of Nova Scotia’s most visited tourist sites with an estimated 1 million visitors a year.

We visited Peggy’s Cove in 2006 and again in 2012 and were saddened to see the deterioration in the lighthouse.  The structure is owned by the federal government, however, it no longer wants to pay for the upkeep of lighthouses as they are considered outdated with today’s navigational aids.  The provincial government is currently in negotiations with the federal government to take over the site but, frankly, I was appalled that such an iconic structure was allowed to fall into such disrepair.  A few days after our visit, a group of local painters volunteered to paint the lighthouse – a stopgap measure and a shame that it had to come to that. The Head Harbour Lightstation (also known as the East Quoddy Lighthouse) overlooks the Bay of Fundy on Campobello Island just a few miles from where Franklin Delano Roosevelt had his summer home.  Head Harbour is the second oldest lighthouse in New Brunswick and is a Classified Heritage Site.  The lighthouse was built in 1829 to assist ships in navigating the treacherous rocks around the island – a task that was made even more difficult in the famous Bay of Fundy fogs.  The octagonal lighthouse tower with the white shingled exterior painted with a red cross is no longer staffed, however, the light is still operational.  The lighthouse is only accessible by foot at low tide as it is on Head Harbour Island just off Campobello.  (I apologize for the poor quality of the photo taken in 2002 before I was using a digital camera but I wanted to include it as it is one of the more beautiful lighthouses that I have seen.) Have you liked our Facebook page yet? I post articles from the blog there as well as photo albums from our travels and other travel news. Or, if you prefer, you can subscribe to the free RSS feed or sign up for an email subscription  to keep up-to-date on our travel adventures.